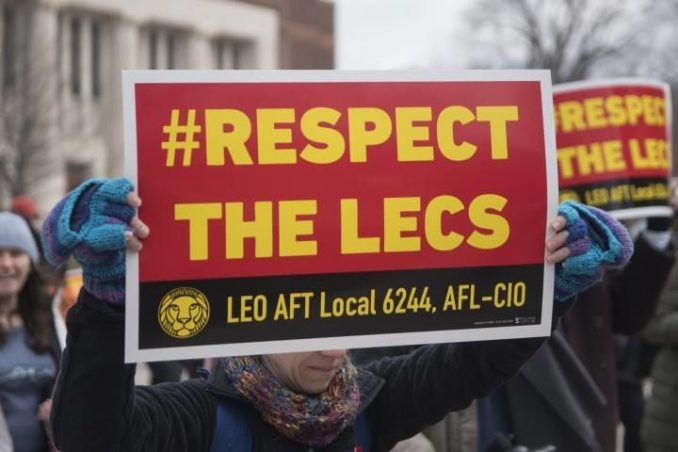 The 1,700 members of Lecturing Employees Organization, American Federation of Teachers Local 6244, voting July 11-13, ratified the new contract by a 98 percent majority. There was strong member participation in the electronic ratification process.

But many instructors make much less. Many are part time, with no control over their course load, which is decided each semester by the administration. Instructors working less than 60 percent of full time have no health benefits. Those working less than full time pay a large percentage of their health care premiums. A lecturer who teaches two or more classes one semester could lose access to health benefits the next semester if their course load drops to one class.

This deplorable situation is not unique to Michigan. Across the country, fewer professors are being hired for full-time, tenure-track positions and are being replaced by lecturers who are paid lower salaries and do not have job security or even a predictable income due to last-minute scheduling.

The new contract at UM will raise pay by an average of 50 percent by the third year of the contract. Currently employed lecturers will receive substantial raises. Access to health benefits is now based on an average annual course load.

The union did not win everything it had asked for and hopes in future bargaining to address the pay discrepancy between the main Ann Arbor campus and the Flint and Dearborn locations. Lower-paid teachers at the satellite campuses were the most active in the contract struggle.

Victory for teachers and students

“We’ve been working since October 2017 to create an agreement that will ensure quality education for our students and fair compensation for our members,” said LEO President Ian Robinson, a lecturer in the Sociology Department at UM in Ann Arbor, in a June 22 LEO news release.

Kirsten Herold, a lecturer at the UM School of Public Health, LEO vice president and manager of the LEO bargaining team, added: “Higher pay will lead to less turnover, more lecturers working full time — rather than holding multiple part-time jobs — and a more stable learning environment for our students to whom our membership are so dedicated.”

This victory was not achieved through skilled negotiations alone. LEO built a public “Respect the Lecs” campaign that included rallies, electronic petitioning and an April 22 sit-in inside the administration building.

The union hired organizers who made a point of talking to every member, hearing what their primary issues were and giving regular updates. Teachers were all set to go out on a two-day strike, which was only called off when the administration began agreeing to LEO’s proposals.

There was mass support from tenured faculty, the Graduate Employees Organization, other campus workers, students and members of the Board of Regents. Students filled out hundreds of postcards giving their reasons for supporting the union. GEO and LEO have a history of mutual solidarity, which has benefited both groups of exploited education workers.

There was also strong support from the nurses in the UM hospital system, who have been dealing with the same hostile management in their negotiations. LEO members are being urged to attend rallies to back the nurses.

The upsurge of education worker resistance, beginning with the powerful strike in West Virginia, has spread to higher ­education.