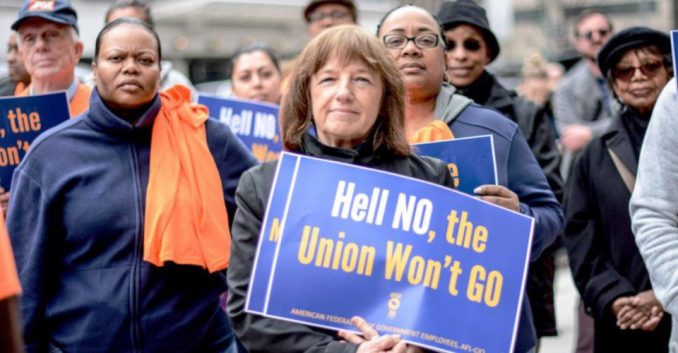 While the right-wing majority on the Supreme Court awarded two major wins in anti-union, anti-worker cases this spring — the reactionary Epic Systems and Janus decisions — the bullying billionaire boss in the Oval Office was also busy, issuing union-busting executive orders on May 25 and July 9. These unpublicized orders are designed to strip 700,000 federal workers, particularly women and people of color, of their rights on the job.

A crime of such magnitude against working people has to be exposed and fought with a mighty fist.

The Trump administration’s new rules are designed to dramatically decrease the threshold needed to fire unionized federal workers. The evidence needed to take disciplinary action against employees has been reduced from over 120 days to 30 days. J. David Cox, president of the American Federation of Government Employees, which represents the workers, told Payday Report: “I have no doubt that the policies and actions of this administration disproportionality impact women and minorities.

“The agencies that have been attacked most severely, agencies like [Housing and Urban Development, the Environmental Protection Agency, the Social Security Administration] and the Department of Education not only provide the greatest amount of services to women and minorities, they also have very high percentages of women and minorities in their workforce.” (July 11)

Traditionally, affirmative action programs and a workforce unionized at four times the rate of private sector unions have made the federal government a more welcoming workplace for women and people of color. Though African Americans account for only 10 percent of the “civilian” workforce, they account for 18 percent of federal workers.

“The new executive orders are going to make it even harder for us to recruit and retain people of color,” said Linda Ward-Smith, president of AFGE Local 1224, representing workers in the U.S. Department of Veterans Affairs. The African-American union leader asserted, “This is just giving management more power to just get rid of people because of whatever reason.”

Trump’s rules also weaken the union’s ability to represent workers. For example, all Title 38 employees at the VA, including many nurses, physicians and mental health specialists in the majority female workforce, are no longer allowed to have shop stewards represent them in disciplinary hearings on official government time. Now, stewards have to clock out.

Studies show workers with union representation are better able to reduce the chances of getting fired.

No longer are workers allowed to use federal computers or email to communicate across workplaces, making it difficult for stewards to meet and talk with workers on the job. “They are making us all at-will employees,” notes Ward-Smith. “A lot of times, we take these jobs for protection. This is why we come to the federal government because we have unions, but now it is just as bad as the private sector.”

At the Social Security Administration, where 32 percent of the workforce is African-American, the Trump administration has banned unions from holding meetings in federal buildings, though that’s been accepted practice for decades. Even unions offering to rent office space at market rate have been refused, despite other businesses having been allowed to do it.

AFGE Council 220, representing about 29,000 employees in Social Security Administration field offices and service centers, has filed four class-action grievances against the SSA for using a promotion system they say is discriminatory. Statistics over four years show that “twice as many whites as minority people get the highest rating,” said Witold Skwierczynski, president of Council 220. Now, SSA workers won’t be allowed to file grievances showing the promotion system is discriminatory.

Council 220 officials view such signs as Trump’s preparation for an all-out war against the agency. “They wanna short-circuit the bargaining we already agreed to by making changes to 21 articles we already agreed to,” stated Skwierczynski. Workers fear agency management will impose a contract on them, instead of bargaining when the current contract expires this summer.

In March, the administration imposed a union contract on Department of Education workers that stripped them of many civil rights gains the federal workforce had won over decades.

A major focus of AFGE’s fightback strategy so far has been on Congress. AFGE has been supported through a series of letters from lawmakers calling for Trump to rescind his union-busting orders that undermine workplace rights. The latest, sent July 9 and signed by 132 members of Congress, noted: “Federal workers are public servants who deserve the workplace rights and protections that last month’s Executive Orders would take away. Those Orders are unfair and will make it harder to attract and retain a qualified federal workforce.” (afge.org, July 16)

A hearing on the AFGE lawsuits against the executive orders is set for July 25, which AFGE calls #RedforFed Day of Action.

Not only is a protest planned on the Mall adjacent to the Capitol in Washington, D.C., but, as of this writing, 15 other demonstrations are planned around the country.

“We gotta get the word out,” says West-Smith. “We gotta fight back.”