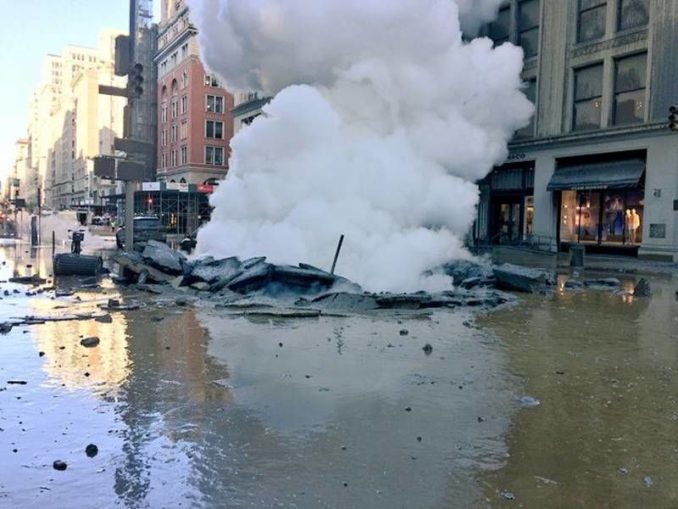 Early on the morning of July 19, part of the infrastructure crumbled in New York City’s bustling Flatiron district, a mixed business and residential area. An 86-year-old steam pipe broke, spewing steam, asphalt, mud and toxic asbestos into the air in a jet stream that reached at least 200 feet high. The explosion left a crater the size of a city bus at 21st Street and Fifth Avenue. Several utility access holes in that area also popped open.

Since it was relatively early in the morning, stores and offices were closed. Only five people were injured, none seriously. Forty-nine buildings were evacuated. As of July 23, nine buildings have been cleared for re-entry. Several streets that had been blocked have been re-opened.

Workers from Con Edison, the city’s billion-dollar energy supplier, and the New York Fire Department are in the process of power washing the outside walls of buildings contaminated by asbestos. They are filtering the water, bagging the asbestos and setting it aside to be buried.

Just breathing in one asbestos particle can produce mesothelioma or other types of cancer. According to some health experts, it takes 20 to 30 years to develop diseases caused by repeated asbestos exposure.

Con Edison is the company that distributes steam — which is produced mainly as a byproduct of electricity generation. It is used for heat, hot water, air-conditioning and sterilization for 1,700 residential or commercial buildings. Con Edison gets 5 percent of its $13 billion annual revenue from steam.

Con Edison sent its Biological/Chemical Weapons Response Team to handle this crisis, even though no government official or agency has suggested that the explosion was caused by a terrorist attack.

The New York Times of July 19, 2007, reported there had been at least 12 steam pipe explosions since 1989. All of them spread asbestos. The city’s 100 miles of steam lines consist of asbestos-covered pipes that are at least 50 years old.

It’s ironic that this steam line eruption happened only a block north of a major water main break followed by a gas line explosion in 1998. The water main was over 100 years old. After the water was turned off, a gas line broke, setting off a fire that took hours to put out. Asbestos was spewed everywhere. Hundreds of offices and stores were closed, Subways were shut down. Traffic was rerouted. Gas, water, electrical, steam heat and telephone services were disrupted.

The latest catastrophe wasn’t as intense as the one in 1998, but Con Edison had been warned about these problems 20 years ago and hasn’t done much to avoid them from recurring.

Underneath Fifth Avenue, as with many Manhattan streets, are layers of services — water, gas, electricity, telephone, cable, sewerage, subway and other train lines, and pedestrian tunnels. City officials, who are responsible for coordinating all these services, project the attitude that maintenance is costly and not necessary — and that repairs should only be done when the infrastructure breaks down.

The city administration prioritizes costs over the quality of lives of the millions of people who live, work, shop in or visit this neighborhood — or anywhere in New York — where they face unpredictable hazards.

It has taken many struggles by workers and impacted Con Edison customers to get the utility company to handle asbestos clean-ups even in a minimal way. The asbestos wrappings around the pipes should be removed, the steam lines reinsulated with safe materials and the pipes upgraded. This should be done immediately — despite Con Ed’s opposition because the company considers this undertaking too expensive.