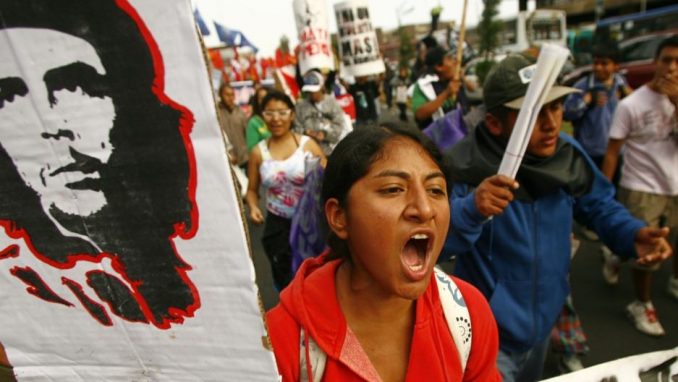 A woman waving a banner of the revolutionary ‘Che’ Guevara takes part in a protest against a U.S. mining project in Lima in July 2012.

What is now Perú was the home, not only of one of the largest empires in the world at one point, but of the largest Indigenous empire. The Incas had evolved and built from earlier Andean groups such as the Chimu, the largest ancient Peruvian civilization directly succeeded by the Incas.

The Incas were a large umbrella encompassing different tribes. The empire extended from the north of Chile to the middle of Ecuador to the east of Bolivia and all of present-day Perú. Over 10 million people from different tribes and cultural backgrounds belonged to this empire, with over 40,000 languages spoken, the elite language being Quechua.

Known as Rumaisimi, “people’s language,” Quechua is still the official language of Perú, along with Spanish. In 1975, Perú was the first country in the world to officially recognize an Indigenous language. Twenty-five percent of the Peruvian population speak Quechua while others learn it in school as a second language.

The Incan Empire is believed to have risen around 1200 Common Era, continuing until 1532 CE, when Francisco Pizarro and Spanish military forces began a campaign to conquer the vast and highly developed empire. As Incan forces battled the invaders, resistance against the colonizers was aided by the last Incan state of Vilcabamba, where the leader Manqu Inka Yupanki set up a refuge for the remaining Incas. Manco Inca’s three sons, Sayra Túpac, Titu Cusi Yupanqui and Túpac Amaru I, continued to fight for decades until they were defeated or killed.

As Spanish invaders attacked, they also began bringing kidnapped people from the West African coast to Perú as enslaved workers. The Spanish forced some enslaved Africans to fight against the Indigenous people, who at the same time were also being forced into slavery. As European diseases began killing Indigenous people, the colonizers needed more enslaved African people as workers, in a parallel to other colonized “New World” lands.

The Spanish, with their system of enslavement, created a racist caste and class system in the land that was now Perú, effectively separating and dividing workers into lower classes. The European Spanish were the most elite; then Criollos of Spanish descent born in the colonies; Mestizos who were Spanish and Indigenous; Mulattos who were African and Spanish; Indios who were Indigenous; Negros who were African; and Zambos, the lowest on the conquerors’ list, who were of Native and African descent. (Described in “Colonial Perú, the Caste System, and the ‘Purity’ of Blood,” by David Gaughran.)

A noted figure in resistance against the Spanish was a Mestizo man claiming to a descendant of Túpac Amaru I. Born José Gabriel Condorcanqui in 1738, known as Túpac Amaru II, he organized a rebellion of over 60,000 Indigenous people at the peak of Spanish colonization. The rebellion kidnapped colonial leaders, held them for ransom and executed them in ways similar to Spanish tactics against the Incas.

Indigenous populations supported the rebellion, which was nearly successful until Túpac Amaru II was captured in 1781. Because of his heroism and success, his name adorns many streets and a long highway in Perú, and he remains a beloved figure.

War for independence from Spain

The Peruvian War of Independence (1811-1826) came as European empires were beginning to lose other colonies. The thirteen “American” colonies had kicked out England; the successful Haitian Revolution had defeated France; and Spain had lost the Dominican Republic and its power in Argentina.

Leading the first struggles for Peruvian independence was José de San Martín, the son of Spaniards, born in Argentina, and a soldier in the Spanish military from the age of 11. He left that army when Argentinians began rising for independence, and became the highest ranked Spanish officer to join a revolutionary movement in the Spanish colonies. His proclamation in Lima on July 28, 1821, was the first formal declaration of Perú’s independence from Spain. After de San Martín’s death, Simón Bolívar completed Perú’s liberation, as well as being integral to that of Venezuela, Bolivia, Colombia, Ecuador and Panama.

The unknown history for many is that these liberation struggles were aided by Haiti after the successful Haitian Revolution. In 1815, Simón Bolívar made his way to Haiti to seek aid from the first Haitian president, Alexandre Pétion. Haitians helped rebuild Bolívar’s army, gave food and shelter, and sent over military supplies.

Pétion gave all this with only one request in return: that all slaves be liberated. In response, Bolívar said: “Should I not let it be known to later generations that Alexander Pétion is the true liberator of my country?” (tinyurl.com/y9ta5enp)

Since independence from Spain, Perú has been plagued by reactionary military rule, austerity and capitalism, to this very day. According to Peru Reports, the top 20 percent of the population owns half the wealth of the country. That wealth is concentrated in Lima, the capital city, whereas the poverty rate in the rest of Perú approaches 30 percent.

Misogyny is rampant in Perú. The Ministry for Women noted that in 2017 there was a 26 percent increase in gender-based violence. Seventy-five percent of Peruvian women asserted being victims of psychological and/or physical assault.

Racism has been poorly combated in Perú. When, in 1940, the Peruvian government took away race as a government census category to create an “all-Peruvian” identity, this amounted to the state saying inaccurately: “We don’t see color.” Though in 2009, the Peruvian government released an apology for “abuse, exclusion and discrimination” against Afro-Peruvians, the lack of official recognition of Afro-Peruvians has given a way to deny racism against them and made it difficult to report racism in public institutions.

In 2013, the Ministry of Education released a survey that showed 81 percent of Peruvians believed there was rampant discrimination in the country. Only 17 percent of Quechua and Aymara people reported belief in the Peruvian state’s performative “appreciation” for their culture.

Since the 2017 return of Afro identity on the state census, it is now estimated there are between 1.4 to 2.5 million Afro-Peruvians.

Because of these conditions, ongoing since the age of colonialism, movements have taken place in Perú to fight for socialism. In 1983, the Túpac Amaru Revolutionary Movement (MRTA) was formed, born out of groups such as the Peruvian Communist Party-Marxist Leninist, the Marxist-Leninist Revolutionary Socialist Party and Revolutionary Left Movement. The MRTA operated in two wings, legally and illegally, calling for a Marxist revolution in Perú.

The biggest focus of the MRTA’s work was to combat imperialism within Perú as well as oppose tactics maneuvered by the United States. The MRTA declared war on the U.S. within Perú and attacked every aspect of U.S. presence in the country. The MRTA kidnapped business executives and robbed banks. The director of Kentucky Fried Chicken in Perú claimed that the company “received ‘almost daily’ demands from the MRTA during January and February 1991 for ‘war taxes,’ and one director has left the country to avoid being kidnapped.” (tinyurl.com/yc5xytkg)

While MRTA probably numbered only about 1,000 people, in 1991 the CIA claimed the MRTA was “one of the greatest terrorist threats to U.S. interests in South America.” The CIA also compared MRTA to the Cuban guerrilla fighters and the National Liberation Army in Colombia and Bolivia. According to the CIA, the MRTA had received training and aid from Cuba and Libya in the late 1980s and early 1990s. (tinyurl.com/yc5xytkg)

The last attack organized by MRTA was in 1996 on the Japanese Embassy in Lima, when ambassadors from Japan came to celebrate their emperor’s birthday in Perú. The MRTA kidnapped and held hostages at the embassy, declaring an overthrow of the dictatorship of the current U.S.-backed president, Alberto Fujimori, who was of Japanese descent.

Removed from office in 2001, Fujimori was put on trial in 2007, the charges eventually including crimes against humanity for the mass murders of students and farmers and the organization of a death squad, Colina Group. (Alberto Fujimori).

Sentenced to 25 years in prison, Fujimori was given a “humanitarian” pardon by then-President Pedro Pablo Kuczynski in 2017. Kuczynski had won the Peruvian presidency against Fujimori’s daughter, Keiko Fujimori, on the platform of making sure justice was served against Alberto Fujimori. Upon this betrayal, Peruvians protested by the tens of thousands in cities all over Perú and internationally.

While Perú has a long and revolutionary history fighting for independence from foreign empires, Perú has remained a victim of capitalism and imperialism. The U.S. is still its colonizer, with Perú functioning as its proxy in South America. The hand of the U.S. in Perú’s internal affairs promotes groups and government officials that put self-interested profit over the needs of the people. The Peruvian government cracks down on labor organizers and monitors socialists through “anti-terrorism” units.

But the people continue to rise against conditions that oppress them — continue to rise in opposition to corruption, wealth inequality, gender-based violence and racism, against foreign companies’ exploitation of Peruvian land and resources.

The first goal is the expulsion of foreign interference in Perú, especially that of the U.S. Then, a return to the land and communal living as practiced by our Indigenous ancestors; a serious process of decolonization to address systemic and cultural flaws left by colonization; and the building of socialism.

Kayla Popuchet, a Peruvian citizen, is the daughter of Haitian and Peruvian immigrants, of Indigenous Quechuan descent.