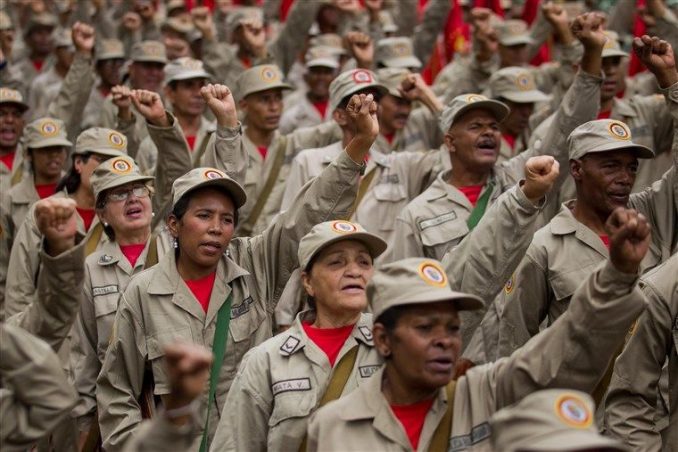 In the face of economic sabotage, subversion, an abortive military coup and threats of open military intervention from U.S. imperialism and its puppet gangster regime in Colombia, the Bolivarian government of Venezuela has taken steps to strengthen its armed forces and to reinforce ties among the soldiers, workers and peasants of the country.

In May, the government arrested 40 officers of the armed forces after it discovered a plot to kidnap President Nicolás Maduro and put him on trial. For a more long-term plan to eliminate the threat of a coup and to strengthen popular defense of the country, the Bolivarian government announced steps in early July to integrate popular organizations with the armed forces.

The most important step is to activate local defense committees, officially called “Committees for Security and Integral Defense,” and to select one person from each of the 50,000 local committees to train with the country’s Bolivarian Militia units.

According to an article published July 11 in venezuelanalysis.com, “Those selected representatives will then form a link between the Venezuelan state’s militias and the communal councils, which since 2006 have organized groups of 20 to 400 families across the national territory.”

U.S. imperialism, under both Democratic and Republican administrations, has been attempting to undermine and overthrow the Bolivarian government since the late Hugo Chávez first took office in 1999.

A coup in 2002 failed and left Chávez stronger than before. Violent street demonstrations the last few years have also failed. Despite the daily hardship faced by the workers and farmers in obtaining necessities of life, including food, the right-wing opposition parties have been completely discredited and Maduro easily won last May’s election.

With the failure of disruption and “regime change” comes the possibility that U.S. imperialism and its West European allies will rely on direct military intervention. U.S. media outlets recently broke the news that the U.S. president raised — both to his inner circle and to a group of Latin American presidents — the possibility of a direct U.S. military intervention.

The Caracas government is taking this threat seriously. Its latest steps to strengthen both the military and popular resistance and to defend the opportunity for the workers and farmers of Venezuela to struggle for a socialist future can only be applauded by those who support a sovereign Venezuela.