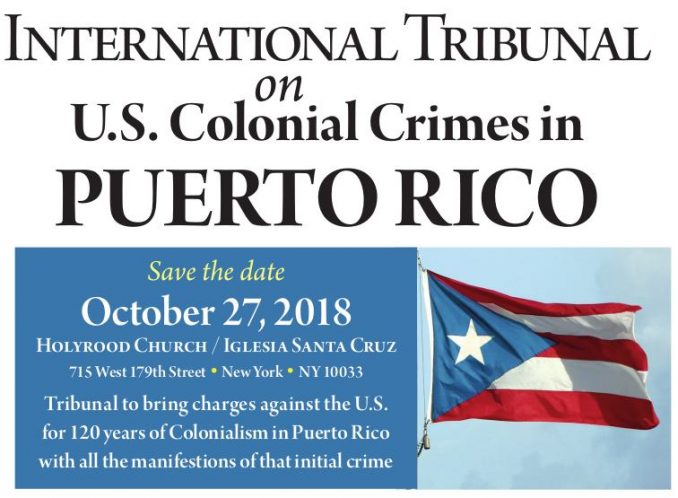 This year marks the 120th anniversary of the U.S. invasion and occupation of Puerto Rico during the Spanish-U.S. war, which ended with the U.S. capturing Puerto Rico, Cuba, the Philippines and Guam.

July 25, 1898, was the day when U.S. ships, commanded by General Nelson A. Miles under orders of President William McKinley, landed in Guánica on the southwestern coast of Puerto Rico. However, little is said about May 12 of that year, when 11 U.S. military ships bombed San Juan on the northern coast. This fact is important to remember, since the apologists for colonization want to dismiss the violent nature of the U.S. invasion.

It was clear from the start what the U.S. had in store for Puerto Rico. This was exposed in a speech Gen. Miles gave in Ponce, just three days after the invasion.

“To the Inhabitants of Puerto Rico: In the prosecution of the war against the kingdom of Spain by the people of the United States, in the cause of liberty, justice, and humanity, its military forces have come to occupy the island of Puerto Rico. They come bearing the banner of freedom, inspired by a noble purpose to seek the enemies of our country and yours, and to destroy or capture all who are in armed resistance.” (Author’s emphasis) (enciclopediapr.org)

This ongoing destruction, in the form of persecution, torture, long imprisonment, repression and assassination of independence movement representatives, has been well documented throughout the history of the occupation of Puerto Rico.

Since that July 25, several events have occurred on this disastrous anniversary, beginning with the July 25, 1952, proclamation of a “new” constitution by the first elected Puerto Rican governor under colonial rule, Luis Muñoz Marín. What had been an official holiday commemorating the U.S. invasion was then called “Constitution Day.”

But this farce, called the “Free Associated State” (Estado Libre Asociado) or Commonwealth, was another U.S. strategy.

The U.S. was in the middle of the Cold War and had to appear as a democratic nation. When it explicitly had a colony, it had to give yearly reports to the U.N. and was seen as an imperialist nation. Therefore, the ELA was established to give the illusion of a certain “sovereignty” in Puerto Rico.

This was the reason that Rafael Cancel Miranda, Lolita Lebrón, Irvin Flores and Andrés Figueroa Cordero went to the halls of the U.S. Congress in 1954 and fired at the ceiling to call attention to this farce.

Another crucial July 25 was the Massacre of Cerro Maravilla. In 1978, two young independentistas, Arnaldo Darío Rosado and Carlos Soto Arriví, were ready to call attention to the country’s colonial status on its 80th anniversary. But they were deceived by an undercover police agent, part of the repressive apparatus involving the FBI against the independence movement. When they arrived at Cerro Maravilla, they were killed in cold blood.

Now, on this July 25, 2018, Puerto Rico is facing the most important legal challenge to its political status. What is happening now is the culmination of the process of destruction of a people that began on the day of the U.S. invasion in 1898.

In 2016, the U.S. Congress, under President Obama, imposed the PROMESA Act to make Puerto Rico pay an illegitimate public debt of $74 billion. Since then, the Fiscal Control Board — whose seven unelected members were nominated by the same Congress — has been dictating severe austerity measures aimed at dismantling the economic and social base of Puerto Rico. The imposition of this board is like wolves taking care of sheep, since board members represent the economic forces that caused this debacle.

This July 25, the federal court assigned to cases involving PROMESA, under U.S. District Judge Laura Taylor Swain, will begin to hear several cases relating to the constitutionality of PROMESA and its Fiscal Control Board. In effect, it will deal with the island’s colonial status.

Whatever happens, one thing is indisputable: The colonial situation has now been exposed and is no longer simply an issue of the “independentistas.” In fact, the outcome of the hearing might just reaffirm the U.S. Supreme Court decision in the 2016 Puerto Rico v. Sanchez Valle case. The court ruled then that “the sovereignty of Puerto Rico resides in the U.S. Congress” or, more clearly, that Puerto Rico is not a Free Associated State with any sovereign power, but an actual colony of the United States.

Under these circumstances, Puerto Rican activists, together with the International Action Center, began to conceive of an International Tribunal on U.S. Colonial Crimes in Puerto Rico. (puertoricotribunal.org)

The call reads: “The Puerto Rico Tribunal Ad Hoc Committee is convening this important war crimes tribunal in order to expose the true nature of the U.S. war against Puerto Rico. This call for action is not made solely for the sake of posterity, but also seeks to strengthen the worldwide struggle for self-determination today. What is happening in Puerto Rico is different only in scale and duration from U.S.-perpetrated destruction elsewhere. Only a people’s campaign in solidarity with the Puerto Rican struggle for decolonization, self-determination and justice can begin to end the continued U.S. presence and domination, not only of Puerto Rico, but in the Caribbean, Latin America and elsewhere.”

The Tribunal will be held Oct. 27 at the the Holyrood Church/Iglesia Santa Cruz in New York City.

Many criminal actions have been perpetrated against the Puerto Rican people by the U.S., both in Puerto Rico and in the U.S.

The main charge before the Tribunal is the invasion and colonization of the archipelago. The criminal manifestations of this occupation make up the rest of a very long list that includes: the highest percentage of forced sterilization of women in the world, the use of Puerto Ricans as guinea pigs for the pharmaceutical industry, and the use of young people as cannon fodder in U.S. wars of invasion and imperialism.

U.S. destruction of the Puerto Rican economy comes not just from the PROMESA Act but from earlier laws, such as the 1920 Jones Act, which requires that only U.S. ships be used to transport goods between U.S. ports. (For a more extensive list, visit tinyurl.com/yc772xmy/.)

The charges will be brought by Augusto Zamora, professor of International Law, who represented Nicaragua in its case against the U.S. in the International Court of Justice, judicial arm of the United Nations.

Goals of the Tribunal

The goals of the Tribunal are to expose in the U.S., and at the international level, the facts regarding Puerto Rico for which the U.S. bears enormous responsibility. For that the Tribunal aims to hear testimonies of individuals, organizations and experts in their field who will reveal the truth of the charges.

Volunteers and funds are urgently needed. For more information, go to puertoricotribunal.org, to the Puerto Rico Tribunal on Facebook or to [email protected]