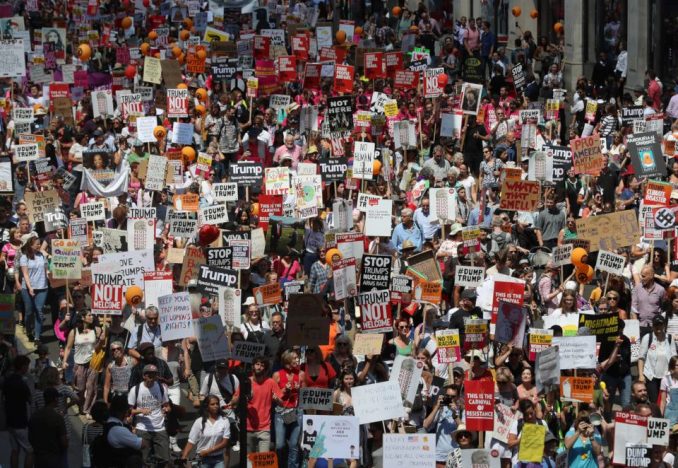 A massive crowd of 250,000 people protested President Donald Trump’s visit to Britain on July 13 in London, says the Stop Trump Coalition.  The group was a main organizer of Together Against Trump demonstrations.

Though dubbed “the Carnival of Resistance,” the issues raised were serious: opposition to Trump’s racism, Islamophobia, misogyny, and immigration and environmental policies, including U.S. withdrawal from the Paris climate control accord. Signs also slammed Britain’s Brexit policy for its xenophobia.

The Women’s March London kicked off the protests prior to the main demonstration.  With the theme of “Bring the Noise” — drums, whistles, pots and pans — women said loudly and clearly that “this misogynist is not welcome here.” Stonewall, the LGBTQ rights charity, had a large contingent and denounced Trump’s attacks on their rights in the U.S.  Later in the day, demonstrators, including many Muslims, marched across London.

A 20-foot-tall blimp, representing Trump, hovered over both Houses of Parliament, the sites chosen because “there are a lot of parallels between Trump’s politics and the UK government, such as indefinite detention of migrants, and having environmentally unfriendly policies,” explained organizer Nona Hurkman. (USA Today, July 13)

Jeremy Corbyn, Labor Party leader, told the crowd at Trafalgar Square: “We’re asserting our rights to demonstrate and live in a world that’s not divided by misogyny, racism and hate. I want to live in a world where refugees are not blamed for the wars they are victims of.” Dividing ourselves by xenophobia means we all lose, he stressed, and “when we unite around common objectives, we can all win.” (socialistworker.co.uk, July 13)

Protesters strongly defended London Mayor Sadiq Khan, a Muslim of Pakistani descent, who has been the target of racist attacks by the U.S. xenophobe in chief and the ultraright in England for his statements sympathetic to migrants. Khan opposes the U.S. travel ban on immigrants from majority-Muslim countries and has called Trump “a menace to democracy.” When asked about Trump’s visit by the media, Khan championed the unity and diversity of his city’s population.

While in Britain, Trump publicly slandered immigrants and pushed Prime Minister Theresa May to hasten Britain’s exit from the European Union.  In 2016, the far right in Britain pushed a racist anti-migrant campaign as the driving force of the referendum to leave the EU, which passed narrowly.  Implementing Brexit will restrict immigration to Britain from EU countries and harm migrants and refugees.

In another sign of resistance, the mayor of Sheffield, Magid Magid, a Somali immigrant, banned Trump from the city and named July 13 “Mexico Solidarity Day.”

Some 4,000 marched against Trump that day in Sheffield and in Manchester, while 1,500 came out in Leeds and 1,000 in Birmingham.

The Scottish Labor Party and Scottish Green Party said Trump was not welcome in their country because of the horrific mistreatment of migrant children, locked in cages at the U.S./Mexico border.

In Scotland, 10,000 people gathered in Glasgow and also in Edinburgh, the country’s capital, on July 14, calling Trump a “racist” and a “liar.” The U.S. president was even dogged as he played golf at one of his luxury resorts in Turnberry. Protesters there could be heard chanting, “No Trump! No KKK! No racist U.S.A.!”  Activists in Scotland are encouraging people in the U.S. to fight the Trump regime because his actions have “global impact.”

Jonathon Shafi, of Scotland Against Trump, expressed solidarity with people in the U.S. and said: “It’s not acceptable that a president talks about grabbing women, separates children from their families and gives encouragement to fascist, racists, misogynists and homophobes. We are against Trump and his divisive regime.” (cbsnews.com, July 14)

And in Wales, hundreds protested in Swansea, Cardiff city center and outside the Senedd, the National Assembly building in Cardiff Bay.  Catherine Fookes, director of Wales Women’s Equality Network, said the protests showed “Wales is against the casual racism and sexism of Trump.”  (bbc.com, July 12)

Outside Belfast City Hall in the north of Ireland, several hundred rallied.  There, People Before Profit councilor Gerry Carroll said thousands would turn out if Trump visited Belfast, as residents deplore everything he represents.

The size, militancy and determination of the anti-Trump demonstrations will buoy people’s movements fighting against all forms of bigotry, xenophobia, sexism, environmental destruction, austerity and war. These large, spirited protests show that the potential exists for a strong united fightback against the forces of reaction in Britain.