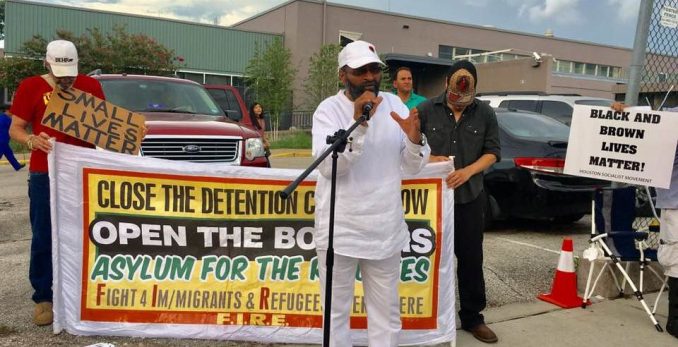 Houston’s Free Los Niños Coalition held a militant demonstration on July 6 outside of a Southwest Key building being remodeled into a prison for unaccompanied minors crossing the Mexico/Texas border without an adult. Almost all speakers condemned not only the Donald Trump administration, but also both the Democrats and Republicans for their anti-immigrant policies and practices. Revolutionary militancy was in the air as speaker after speaker said they would not allow this children’s prison to be opened.

Kofi Taharka, national chair of the National Black United Front, spoke loudly as he said, “A slave quarters on Emancipation Avenue? Hell no! Our community fought to get the city to rename this street from one honoring a Confederate general to one our ancestors would recognize: Emancipation Avenue.

“Emancipation Park on the south end of this street was founded by the Rev. Jack Yates and other newly freed slaves in 1872. We will not allow a prison to be on the north end of Emancipation Avenue. Black Panther Carl Hampton was assassinated by Houston cops on this street.

“Yes, immigration is a Black issue. Anytime the government talks about prisons, they are speaking about Black people. We are here today in solidarity with everyone who wants to stop this prison,” Taharka asserted.