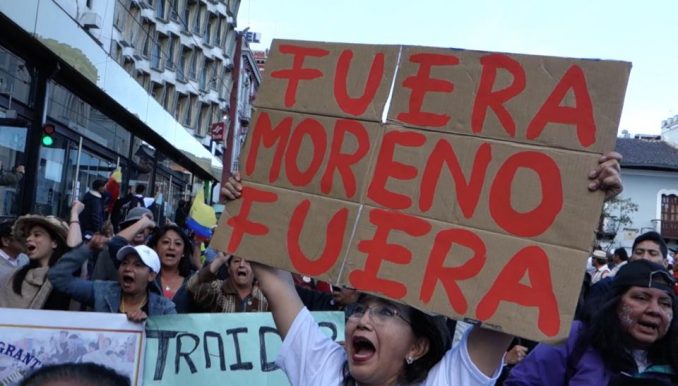 Quito, Ecuador — A massive manifestation of popular support for ex-President Rafael Correa took place on the sunny afternoon of July 5 here in Quito, the capital. The action was at the same time a dynamic expression of growing Ecuadorian resistance against current President Lenin Moreno’s moves to restore the conservative policies that preceded the fledgling Citizen Revolution that began with Correa’s first term in 2007.

That the Citizen Revolution now lies in ruins was evident in the banners and the chants of some 20,000 people who flocked here from all parts of the country. Ecuador is a little smaller than Arizona, with a population of 16 million people.

Thousands marched through Quito’s center in a 10-block-long protest that ended in Plaza Santo Domingo. Protests in Guayaquil and other cities emphasized the same demands: end the political persecution of Correa and free political prisoner, former Vice President Jorge Glas.

Ecuador’s people elected Moreno along with Glas in April 2017, expecting him to continue the progressive agenda of the Citizen Revolution. But during his campaign Moreno was making secret deals to turn over control of the public electric company to the Abdala Bucaram mafia, which later earned him the title of “professional impostor.”

Wealthy oligarchs own nearly all of Ecuador’s media, which was hostile to and demonized Correa and the Citizen Revolution. Instead of combating this corrupt media, Moreno used the vengeful hatred it fostered between 2007 and 2017 and then employed Ecuador’s judicial system to persecute and destroy his former comrades.

The law as a weapon of political warfare, called “lawfare,” was also used against presidents Lula da Silva and Dilma Rousseff in Brazil and Cristina Kirchner in Argentina, all of whom Washington saw as obstacles to imperialist domination. As Kirchner observed, the objective of lawfare is “to hide the economic disaster that the neoliberal governments are carrying out in the region.” (perfil.com, July 9)

All who served in Correa’s regime have become judicial targets of the soft coup d’état that started with the preventive detention and frame-up of Glas in October 2017. Some 70,000 public employees will now lose their jobs in the name of “austerity” to fix a manufactured fiscal crisis, while the government has forgiven billions of U.S. dollars in unpaid taxes owed by the rich.

Correa has been indicted for kidnapping a former public official. The official at the time was a fugitive from Ecuador law, living in neighboring Colombia and engaged in sabotage against Ecuador as an agent of then right-wing Colombian President Alvaro Uribe.

On July 3, Judge Daniela Camacho requested that Interpol arrest Correa and return him to Ecuador for preventive detention. This charge is even more ludicrous than the cases against Glas and Lula da Silva. Ten or more cases against Correa are now underway by the Ecuadoran judiciary.

Amparo Castillo, leader of La Resistencia Ciudadana, explained to Workers World that untold numbers of public workers joined the march after work, along with many “like us, the people who ride the bus because we don’t own cars” and “other people of the heart who love Rafael Correa and many others who are thankful for the benefits that came from him.”

Compañera Castillo supports Correa and denounces especially the judicial and constitutional irregularities promoted by the current government. She says that people marched because we wanted to tell Moreno that “Raphael Correa is still our leader.”

Huge banners from every province and hundreds of handwritten placards told a story: “Correa amigo, the people are with you.” “Freedom for Jorge Glas.” “We are all Rafael Correa.” “No to Dictatorship.” “The New Economic Law Serves Only the Oligarchy.” “There Is No Rule of Law in Ecuador.” “The Homeland Is Not for Sale.” “No Justice No Peace.”

The corrupt media ignored the Quito march, but after sunset when the rally in the Plaza Santo Domingo was ending, they blamed the protesters for violence. Castillo witnessed cops on motorcycles attacking demonstrators with batons. She saw a young man knocked down by one cop on a “moto” and then run over by another. Things got desperate when ambulances did not respond to her 911 calls for assistance.

The media have confused people, but recent polls find that more than 50 percent of Ecuadorians don’t believe a word that Moreno says. Cayetano told Workers World, “More and more people are not happy in Ecuador and want to heat up the streets to take [Moreno] out.”

Compañera Cayetano observed that the July 5 march was much larger than the protest held in Quito on April 10, which she also attended. Based on reports from her family members who live in Quito, she highlighted the fact that even some people who were longtime critics of Correa were marching on July 5.

Echegaray and Cayetano are active in collecting signatures to register the new MANA party, whose leaders organized the demonstrations. Ecuadorian leaders plan to organize more national marches to build the MANA party network and mobilize people against political persecution and austerity measures that Washington and the International Monetary Fund have imposed as part of their neoliberal demands.