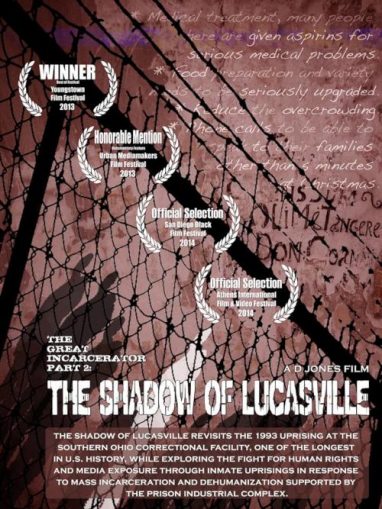 Detroit activists had the opportunity June 30 to learn about the 1993 prison rebellion at the Southern Ohio Correctional Facility in Lucasville, Ohio, and the cases of the Lucasville Five.

The five — Siddique Abdullah Hasan, Keith Lamar (aka Bomani Shakur), Nameer Mateen (aka James Were), Jason Robb and George Skatzes — were falsely convicted of murder and sentenced to death for the killing of a guard and, in Skatzes’ case, taking an inmate hostage during the siege. Altogether, some four dozen inmates were charged, convicted and given long sentences, though most of them were innocent men scapegoated for participating in the uprising.

The meeting, organized by the Michigan Emergency Committee Against War and Injustice, began with a showing of the 2013 documentary by filmmaker D Jones, “The Shadow of Lucasville.” Mosi Paki, who along with other inmates was accused of “complicity” in the killing of guard Robert Vallandingham and forced to serve the maximum of his original sentence by SOCF’s Rules Infraction Board, spoke about the 1993 events and the conditions behind the walls at the time. Imam Siddique Abdullah Hasan called into the meeting from the Ohio State Penitentiary in Youngstown where he, Lamar, Mateen and Robb are currently housed.

The uprising began with what was intended as a nonviolent protest against forcing Sunni Muslim prisoners to take a tuberculosis test involving the ingestion of an alcoholic substance — a violation of their religion. Other aggravating conditions that led to a full-scale rebellion included poor food and medical care, frequent guard violence and guard-instigated inmate-on-inmate violence that had led to a number of deaths, overcrowding and allowing only one phone call to loved ones each year.

The speeches and film made clear that the real killer of Vallandingham was likely the state prosecutor’s key witness against the convicted men. The state had singled out inmate leaders who were involved in negotiating a 21-point surrender agreement, when it was actually their efforts that prevented further loss of life beyond the guard and nine inmates who were killed. One of the 21 points was that there would be “no retaliation,” an agreement that was flagrantly violated.

Former Ohio and Michigan prisoners and the parents of a Michigan prisoner took part in the June 30 meeting, along with local activists who came after attending immigrant rights demonstrations. The question-and-answer discussion with Imam Hasan covered such varied topics as the unity among Black, white and Latinx inmates during the uprising and discriminatory treatment and surveillance of Muslim inmates in Ohio and other states.

Over the years, Ohio supporters of the Lucasville defendants have built a statewide network. In light of this year’s 25th anniversary, and the fact that Lamar could receive an execution date this year, there is now a stronger push to build more support for the Lucasville Five around the country.