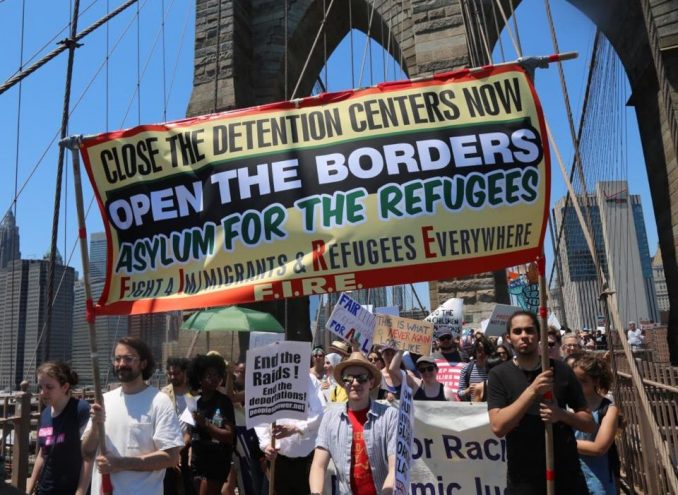 Hundreds of thousands of people demonstrated in more than 700 actions in large cities and small towns across the U.S. on June 30, the National Day of Action for Immigrant Justice. They denounced the Trump administration’s war on im/migrants, especially the inhumane separation of children from their parents at the U.S./Mexican border. Demonstrators called for family reunification, an end to detentions and the abolition of the hated Immigration and Customs Enforcement agency.

Protests arose against the Trump administration’s “zero tolerance policy,” whereby all immigrants, including asylum seekers, are arrested, jailed and deported. Children are cruelly separated from their parents and detained.

Seeing young children in cages and hearing their plaintive cries for their parents has enraged sympathetic people and spurred them into action. Strong protests pressured the White House xenophobe in chief to announce an end to child separation policies on June 20. To him, the “visuals of caged children weren’t good optics.”

But, as MSNBC reported on June 29, over 2,000 youngsters are still separated from their parents. Shockingly, young children must appear before immigration judges alone, without guaranteed public defenders.

In Washington, D.C., thousands of people rallied June 28 to demand the reuniting of immigrant families and an end to detentions, deportations and ICE terror. Signs read, “Abolish ICE!” Nearly 600 activists, mostly women, were arrested as they occupied the Senate Office Building.

demonstrations. In solidarity with ­migrant families, hundreds of groups mobilized and participated, including Workers World Party and the newly formed Fight for Im/migrants and Refugees ­Everywhere.

Here are highlights of demonstrations that WWP and FIRE joined.

A FIRE delegation, comprised of activists from many states, joined protests in Texas border towns to support im/migrant families. Hundreds of local residents joined the June 30 demonstration in the city of McAllen. It was the first protest for many, whom the migrant crisis motivated to participate in this intergenerational, multinational, multigendered action.

The day’s action took place outside a U.S. Border Patrol station. ICE and the Department of Homeland Security dominate McAllen, the site of the U.S.’s largest detention center.

Youth organized and emceed the rally, and in the open mic session, welcomed FIRE speakers Richard Kossally, Gabby M., Lizz Toledo and John Parker. After they spoke, someone made a sign reading, “No one is illegal on stolen land!”

Two days earlier, 3,000 people joined a statewide demonstration in Brownsville, a border entry point, gathering across the street from the federal courthouse where detained migrants appear before judges. Signs called for ICE’s abolition.

Activists from the Rio Grande Valley in South Texas along the Mexican border joined that protest, which was organized by the American Civil Liberties Union. Members of La Unión del Pueblo Entero (LUPE) formed a circle and passed around a microphone to discuss the issues.

People then marched around the courthouse. They tried to storm the courtroom to show solidarity with the migrants inside, but police only allowed a small delegation to enter.

In the Greater Fort Worth area, 500 people at the Tarrant County Courthouse demanded justice for migrant families. Rally speakers called for ICE’s abolition and the reuniting of families. After marching to the Fritz G. Lanham Federal Building, the crowd heard wrenching stories from people who had been harmed by ICE and by police cooperation with that inhumane agency.

The crowd greeted by phone a woman who, while unable to attend, wanted to tell her story: ICE separated her family. Demonstrators cheered her on, telling her that many people support her right to be in the U.S. and seek a better life for herself and her family.

Some 15,000 people marched in Boston to protest the criminal treatment of migrants. They rallied outside the JFK Federal Building, site of the immigration court. Mahtowin Munro of United American Indians of New England emphasized that no human being is illegal on stolen land. Other speakers represented the Student Immigrant Movement and the Matahari Women’s Center.

There, undocumented immigrants told their stories. The Justice4Siham campaign and FIRE Boston members spoke. Protesters chanted, “We see you!” to detainees, who banged their fists on the windows, waved and thanked the crowd.

Twenty activists from Cosecha, IfNotNow and other organizations were arrested for sitting on detention center steps.

A muffled roar rumbled through the hot, empty streets of downtown Syracuse, N.Y., as 500 people chanted, “Abolish ICE!” as they went from Perseverance Park to briefly block the doors of the local ICE office on Clinton Street. There, a banner was hoisted over the entrance reading: “ICE kidnaps migrants here! Abolish ICE!” After hearing speeches, people moved to block the garage entrance where ICE vans take away kidnapped migrants.

People finishing the service at the Episcopal Church of the Messiah in quiet Rhinebeck, N.Y., joined others outside on the lawn. Over 200 people condemned the U.S. government’s mistreatment of migrants, asylum seekers and their children.

In Kingston, a small city 100 miles north of New York, a few hundred people gathered on the City Hall lawn for a bilingual Spanish-English rally. A favorite placard slogan was “Nobody leaves Mid-Hudson!” which was also the defiant name of one of the organizing groups. Planned Parenthood was another key organizer.

The contingent’s signs and chants called for abolishing ICE and the racist police and prison system, and ending the occupation of Palestine and all U.S.-sponsored wars.

FIRE’s impressive banner called for closing detention centers, opening the borders and granting refugees asylum. The crowd cheered the contingent and passing drivers honked, showing popular support for a radical movement against ICE in this city.

Led by the group Juntos, over 4,000 people packed Logan Square in Philadelphia to condemn racist attacks on immigrants and refugees. WWP helped convene an anti-imperialist contingent, which included the Comité Boricua Filadelfia-Camden, Mobilization for Mumia, the International Action Center and the Party for Socialism and Liberation.

Protesters called for an end to family detention. For many years, there has been a struggle to close the Berks County Detention Center, located 70 miles outside Philadelphia.

Speakers expressed solidarity with the struggles of immigrants and refugees worldwide, including the Palestinian people. One speaker received an enthusiastic response when explaining that U.S. imperialism causes migration and displacement. Many speakers stressed that building a fighting movement is the way to win justice. After the rally, hundreds of people marched to the regional ICE office.

Speakers condemned Trump’s family separation policy and migrant detention camps, and some called for abolishing ICE and demilitarizing the border.

Imam Yahya Ederer, representing the Muslim Community Center of Charlotte, condemned the U.S.’s genocidal history: “This country was founded on class warfare and racism. … Natives that lived here were genocidally taken out by white Europeans. … We can change the future.”

State Congressperson Alma Adams compared migrants in detention centers to Nazi concentration camp prisoners. She recited Martin Niemöller’s words about the Nazis targeting group after group until he himself was detained.

Several thousand people descended on Atlanta’s City Detention Center in solidarity with detained immigrants, some of whom looked out from their cells through small slits.

Then the crowd, which stretched for blocks, marched through the city. Calls rang out to abolish ICE and unite families. At the Richard B. Russell and Martin Luther King Jr. federal buildings, speakers included Latinx and Muslim activists keen on uniting their struggles.

Returning to the detention center, a dedicated group of protesters established an encampment outside. To many, the ACDC is a testament to the brutality of U.S. immigration practices. In 2017, Atul Kumar Babubhai Patel, a detainee there, died after gross medical neglect.

Many participating organizations demonstrated earlier in the week to denounce the Supreme Court’s ruling upholding the anti-Muslim travel ban and to oppose inhumane treatment of migrants.

Over 2,000 people demonstrated in downtown Cleveland on the national day for im/migrant rights called by Families Belong Together.

There have been two major workplace raids in northeast Ohio during the current wave of ICE terror. One of the raids was conducted on Corso’s Flower and Garden Center in Sandusky where ICE dragged away 114 workers.

A number of children whose parents were arrested at work and detained spoke at the rally of the fight to release them. To show solidarity with the families, twitter #LosNinosDeCorses.

Multiple actions took place in Chicago against ICE, family detention and the criminalization of immigrants. On June 29, people in the Pilsen neighborhood heard testimonies by people whose loved ones had been detained or deported. Speakers from the Pilsen Alliance, Comité de Justicia por Ayotzinapa and the Arab American Action Network called for ICE’s abolition, dissolution of borders and an end to U.S. imperialism. Afterwards, the crowd marched to Cook County Jail.

On June 30, over 60,000 Chicagoans congregated in Daley Plaza to support persecuted immigrants and demand an end to family separations. Forces advocating the abolition of ICE and the police formed a contingent comprised of youth of color — who were drumming and leading chants — socialist organizations and militant immigrant rights groups. They exposed the role that municipal administrations play in the deportation machine; ICE leases jails from suburban governments to house people slated for deportation. Demonstrators called for freeing everyone held captive in Illinois.

Tens of thousands poured into the streets of Los Angeles, many from the city’s huge Latinx migrant communities. The largest crowd gathered at City Hall at a rally called by groups including the Coalition for Humane Immigrant Rights. Hundreds of signs called for family reunification and ICE’s abolition.

Congressperson Maxine Waters got the greatest response. She has received death threats after calling for people to confront Trump administration officials over their zero tolerance policy and separation of migrant families. Singer John Legend encouraged everyone to join the movement.

The ICE Out of LA Coalition demonstrated at the mayor’s residence. Also, hundreds of people gathered outside the federal detention center, which imprisons many immigrants. In a moving scene, protesters held signs and chanted messages of solidarity while detainees rapped on their cells’ glass windows in acknowledgement.

Thousands turned out in California’s Bay Area, with the largest event in San Francisco, beginning at Dolores Park in the Mission district and ending at the Civic Center. Signs read, “Abolish ICE!” “Queers for Open Borders!” “From Palestine to Mexico, Racist Walls Have Got to Go!” and “No human being is illegal!” Heartbreaking signs mentioned separated loved ones.

Over 1,000 people rallied at the Richmond Detention Center, where 200 people are in ICE custody. Cat Brooks, African-American candidate for mayor of Oakland and Anti Police-Terror Project leader, spoke: “I stand here as a Black woman who knows what it feels like to have the boot of white supremacy on my neck. This is state terror. This is an American concentration camp, not a jail.”

About 10,000 people rallied at the Seattle-Tacoma Federal Prison where 200 migrants, mostly women, are jailed. One-third of them have been involuntarily separated from their children. The crowd shouted, “Shame! Shame!” Women from the Latinx community chanted: “No están solas! You are not alone!” to reach their sisters inside.

Maru Mora Villapando, Northwest Detention Center Resistance coordinator, won a temporary reprieve from an ICE court on June 26. The agency had tried to silence her by ordering her deportation. That day, 250 people rallied outside the court in solidarity with her.

Afterwards, they marched to the federal courthouse and joined another 250-person rally opposing Trump’s anti-Muslim travel ban, organized by the Council on American-Islamic Relations, One America and other groups.