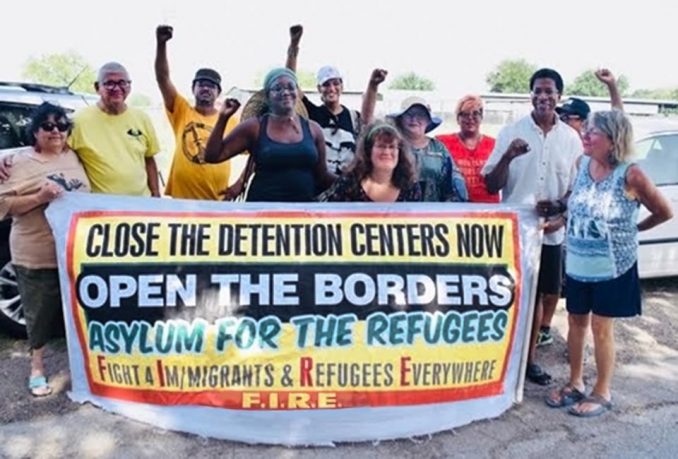 The FIRE delegation (Fight for Im/migrants and Refugees Everywhere) reported live from the U.S./Mexico border to a June 28 Workers World forum in New York City. WWP Secretariat members Sara Flounders and Monica Moorehead commented from NYC. This is a lightly edited transcript.

Sara Flounders: This is a moment of crisis for millions of migrants around the world — adults and children — forced to flee their homes because of poverty, violence and wars imposed by the U.S. and European imperialists. That’s why we’re launching a new national organization to amplify the struggle of migrants and refugees: FIRE — Fight for Im/migrants and Refugees Everywhere.

FIRE’s goal is to connect all the issues that face workers here in the U.S, and build the greatest unity to create a broad movement that will take direct action against the horrific crimes of ICE [Immigration and Customs Enforcement] and the Border Patrol.

A FIRE delegation of eleven activists is on the border tonight in Brownsville, Texas. Their goal is to mobilize activists, primarily young LGBTQ people of color and working-class organizers, to travel to the border, learn about the struggle there, do support actions and eye-witness tours, and then come back and help organize resistance.

Gloria Rubac: Today, a few miles from the Mexican border, we participated in a demonstration, “Families Belong Together,” in Brownsville at the very tip of the state. It was a huge demonstration, at least by Texas standards, with 1,000 people who came on buses from Houston, San Antonio, Austin, Dallas, Laredo, as well as people living here in the Rio Grande Valley.

Tonight our delegation is going to a vigil for Claudia Patricia Gómez Gonzáles, the Guatemalan Indigenous Maya-Mem woman who was murdered [May 23] by the Border Patrol. The vigil is in San Juan, about 4 miles from here. Tomorrow morning we’re speaking at a community college to a class we were invited to.

Then Saturday, June 30, like everywhere, there will be demonstrations here — one in McAllen and one in Brownsville.

We hope to also take our delegation to the South Texas Human Rights Center in Falfurrias, where the Border Patrol has a checkpoint. When migrants cross the border, since they know where the checkpoint is, they go inland to go around. Every year probably hundreds of people die on the inland ranches because of the heat.

Until Houston activists opened this human rights center, the ranchers would find the dead, their bodies, their bones, throw them in a plastic trash bag, and then the county would put them in a cemetery, taking no information on what they were wearing, tattoos, whatever — and no DNA. We found out that was illegal, so now we have forced them to document, to take DNA. We are working with pathologists and anthropologists from one of the universities to match the people with families, wherever they might be.

Families look forever to find out why they have not heard from their missing loved one — the person who has crossed the border. So this identification is important, even if the person has died.

John Parker: At today’s rally a freelance journalist told me that this area of the Valley experiences some of the highest homelessness and unemployment. This is where some of the first maquiladoras [U.S.-owned, low-paying factories] started across the border in Mexico. There is a long history of repression here, and people are angry and fed up. There is a lot of humidity and heat in the air today, amplified by the heat of the rage of people fed up with the situation.

Shocking things are coming to light, things that happened in previous U.S. administrations. Folks are not going to be willing to have the same old solutions. There’s a lot of talk about “we need to go vote” and sometimes organizers steer things in that direction. But a lot of people, including at this demonstration, won’t accept that. People are calling for the abolition of ICE, but the Democrats are saying they are just going to “reform immigration.” People aren’t going to accept that.

I think one of the reasons our banner was so popular at the protest is that FIRE is making a militant call, including for the abolition of ICE.

People know the causes of migration and immigration are U.S. economic and military wars — in Central and South America, in Libya, Iraq, Syria — that these are causing the refugee crisis. And the border is tied to the attacks by police in the U.S. on Black and Brown people. In fact, one of the chants today was “No justice, no peace, no racist police!”

Nat Heathman: At the rally today, yes, there were a lot of liberals there, but also there were people with more militant politics. We can be proud of how we represented FIRE.

Steph Davies: It was an impressive crowd today and a very striking event. The organizational leadership was definitely trying to keep things in a more liberal, moderate direction, with the speakers talking about voting. But once the momentum of the people built and the crowd had control of the situation, how powerful their politics were! It was a striking overture for FIRE’s launch. It showed that conditions are in place for change because people want to abolish ICE, people want to prosecute the crimes that are being committed against migrants.

Joe Piette: Today, first there was a rally, and then the marchers lined up in twos and converged on the courthouse where deportation hearings were happening. The crowd surged to the doors, but the lead organizers urged them back. There is militancy here.

There were some workers’ organizations, including the Fuerza del Valle and the Texas teachers’ union. Evidently, last week they organized their own rally. It’s an important development to have workers here.

Yesterday, a few of us protested during the execution of Danny Bible in Huntsville, Texas. [Ed.: Since 1976, Texas has executed more than one-third of the national total of prisoners victimized by capital punishment.]

Teresa Gutierrez: What FIRE aims to do is be the left flank of the movement supporting migrants who are under attack.

We don’t want to leave the issue in the hands of liberals. We don’t want to fight the liberals — they are doing important work, taking cases and saving lives. What we do want to do is influence the movement, and not have the movement’s direction determined by liberal politics.

But we know that there are tens to hundreds of thousands of people fed up with the Democratic Party machine, who know that the November elections are nothing to set their sights on, that Democratic President Obama was the deporter in chief, that the Democrats always sell out the struggle.

Here in the Valley is a conservative place, where it is hard to fight back, and the police are all over the place. FIRE came to a demonstration and people took our militant literature and talked to us. It really speaks to what people are ready for.

FIRE can be the left flank of this movement.

FIRE can expose what it means that a white supremacist, wannabe Nazi is at the head of the government. We are going to take that on.

FIRE needs to continue to push the momentum that exists for abolishing ICE and link this to abolishing the police. This would make a tremendous contribution to the class struggle.

FIRE should raise the death in ICE custody of Roxana Hernández, the trans sister who crossed the border in a caravan from Mexico, and link her case to that of Antwon Rose, the African-American youth who cops killed in Pittsburgh.

FIRE should equally push to close both the migrant detention centers and close U.S. prisons.

Monica Moorehead: This is such an important crisis that the international working class is facing. Trump as a white supremacist representative of the ruling class is attempting to divide the working class by targeting migrants. We must do everything we can to be the left flank of this movement, to show that independent fightback is the only way to fight the crisis and unite our class. To call for abolishing ICE along with the police, as part of the oppressive class apparatus, and also unite with the other people of color being targeted — Muslims, Black people, Indigenous people. We are all workers, fighting together.