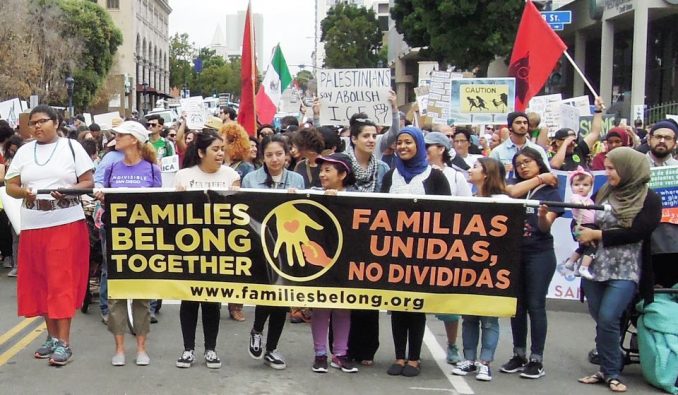 People all over the U.S. are up in arms with righteous indignation.

From every corner of the country, from every sector of the population not in line with Trump’s racist ideology, the people are saying “No!” to the cruel and inhumane treatment of migrant children and their parents.

This protest is excellent news, as the crisis created by #45 at the U.S./Mexican border merits an all-out, anti-capitalist, revolutionary response. The time for half measures is over.

The question, however, is will the current movement be enough to stop Trump’s fascistic war against the tens of thousands of workers fleeing for their lives?

Will it be enough to reunite migrant children with their families?

Can this movement against the crisis at the southern border extend to recognizing the need to demonstrate solidarity with migrants from Africa, Asia and the Middle East?

Only time will tell.

But unless the movement can be sustained, unless the people of this country can commit to a very long haul, not only will many stolen children never be reunited with their families, but the urgent care needed to counter the catastrophic trauma they have experienced may never be given.

In addition, the necessary and earned amnesty or permanent residency for refugees, especially from Central America, may never be won.

That is why it must be asked at this historic juncture: Can the current crisis on the border unite every sector of the working class to continue to push until victory? That would be a win not just for migrants, but for us all.

If the movement can win the closing of detention centers for migrants, for example, the thousands of prisons that incarcerate Black and Brown and poor people can be next. That should be the goal of today’s movement. Incarcerated people have waited long enough.

Crisis made in U.S., not Central America

The unbearable conditions that have sent people fleeing from the Northern Triangle — El Salvador, Honduras and Guatemala — were created by the U.S. Unless the Pentagon and the government are forced to stop propping up these corrupt governments and pay reparations for the riches they have stolen, people will continue to flee.

This major humanitarian and political crisis stems from the global economic crisis, which is wreaking havoc on the people and the planet.

That the most powerful country in the world has a president the likes of #45 during this global crisis is troubling enough. But both the Democratic and Republican parties have historically demonstrated that they have no real solutions and are in fact part of the problem. For all their fervor against #45, the Democratic Party will not break from the capitalist system that spawned it.

In fact, it was former Secretary of State Hillary Clinton who in 2009 approved the policies forcing migration today.

Over 2,300 children have been wrenched away from their parents and families — if the numbers are to be trusted.  It could even be many more.

Some of the adults have already been deported without their children. That itself is inhumane.  Children in one shelter in Texas have been given psychotropic drugs, evoking Nazi Germany.

In fact, all of #45’s tactics evoke Nazi Germany.

Today’s outcry is in response to the “zero tolerance policy,” an administrative rule issued in April by #45 and Attorney General Jeff Sessions. Under this policy, anyone crossing the border without a visa is automatically labeled a criminal.

Many crossing the border today actually qualify for asylum as victims of state terror and other qualifications. Yet this legal and humane process is being done away with. In fact, #45 announced he wants to end due process altogether. Photos of dozens of migrants shackled together in front of a judge are mind boggling.

#45 issued an executive order June 20 putting zero tolerance on hold. But conflicting reports from the administration have indicated that the policy will nonetheless continue, one way or another.

What is being promoted by the government now is “family internment,” exactly as in the days of the heinous internment camps during World War II set up to hold people of Japanese ancestry. This amounts to “handcuffs for all,” as the media have pointed out.

Nowhere are there plans for how or if the government will reunite the more than 2,300 children who have already been separated from their families. Instead, what is being planned is the military detention of migrant workers.

According to an exclusive June 22 article in Time magazine, “The U.S. Navy is preparing plans to construct sprawling detention centers for tens of thousands of immigrants on remote bases in California, Alabama and Arizona, escalating the military’s task in implementing [the] ‘zero tolerance’ policy … according to a copy of a draft memo obtained by TIME.

The article continues: “The memo also proposes a camp for as many as 47,000 people at former Naval Weapons Station Concord, near San Francisco; and another facility that could house as many as 47,000 people at Camp Pendleton, the Marines’ largest training facility located along the Southern California coast. The planning memo proposes further study of housing an undetermined number of migrants at the Marine Corps Air Station near Yuma, Arizona.

“The planning document estimates that the Navy would spend about $233 million to construct and operate a facility for 25,000 people for a six-month time period. The proposal suggests these tent cities be built to last between six months and one year.”

While the focus now is clearly on the southern border, the movement must be prepared to turn its attention to these encampments. Young people in particular are ready to “shut shit down” — clearly one of the answers to this current crisis.

#45 is holding out to get the billions needed to build the wall, and his real estate developer pals and construction vultures are salivating all over it.

The movement, however, can stop the building of the wall.

A June 25 Ipsos polling survey found that the U.S. and Canada were the “two most tolerant and inclusive” countries in the world toward immigrants. The study suggests that most people in this country are “at odds with the nativist position of the current administration.” That is what we are witnessing across the country today.

Comrade Fidel Castro once stated that he believed fascism would never take hold in the U.S. He had a great deal of confidence in the people of this country to stop it.

Let us hope that today we are witnessing the beginning of a great movement, one that can be sustained to not only stop #45’s fascist tactics at the border but end capitalism once and for all.