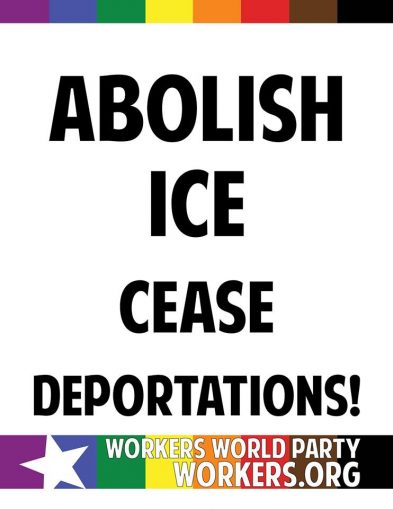 People all over the country — indeed, all over the world! — are demonstrating against the latest obscene steps taken by the Trump administration in its war against im/migrants and refuge seekers. They are haunted by the images of im/migrant children trembling and sobbing as they are yanked away from their parents.

One of those speaking out against this extreme official cruelty is Rep. Maxine Waters, who became the subject of numerous talk shows, editorials and Oval Office tweets after she called on people to confront and denounce the politicians responsible for this policy.

Waters is a longtime liberal Democrat, re-elected many times by her largely Black constituency in Los Angeles. She is not a typical politician. She has been outspoken in supporting Cuba against the U.S. blockade and opposing the Iraq war, and she sided with her constituents in the Watts neighborhood of LA when poverty and police brutality pushed them to rebel in 1992.

That a Black elected official, a woman, would vigorously call for in-your-face protests against his vicious attacks on im/migrants enraged Trump, who in a tweet insulted her intelligence and accused her of encouraging violence — even as his agents were violently breaking up im/migrant families.

All the corporate media are using Trump’s attack to condemn violence on the part of those who resist him and call for “civil discourse.” They dwell on the militant actions of those protesting the violence of the capitalist state, while accepting the day-in, day-out rule of terror by generals, cops, prison guards and Immigration and Customs Enforcement agents as normal and not even worthy of discussion.

This is the oldest trick in the book. When the Vietnam War was on, and thousands were dying every day because of that horrific assault on the Vietnamese people’s right to self-determination, those here who tried to stop the war were accused of violence if they burnt draft records or scuffled with Army recruiters.

Those fighting this exploiting and repressive system need to consider the relationship of forces when devising what tactic to employ in the struggle. But it is not a moral issue. Malcolm X put it right when he said in 1964 that Black people must fight for their freedom by “any means necessary.” All the morality in this struggle is on the side of the oppressed, who have met with violence from the repressive state at every turn.

Confront the racists and warmakers! Stop the attacks on im/migrants by any means necessary!