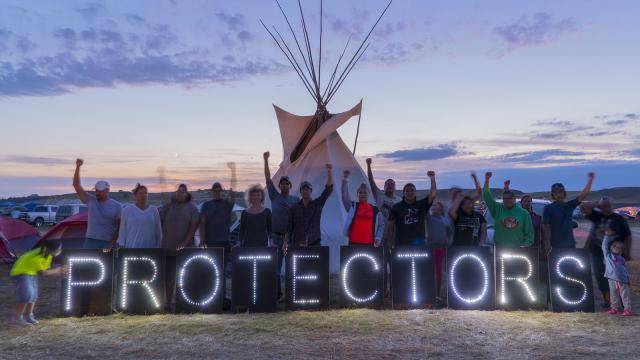 The historic Indigenous-led struggle of thousands against the Dakota Access Pipeline at Standing Rock may not be news in the mainstream media anymore. But the struggle continues as hundreds of water protectors have had to deal with federal and state charges against them.

The #NoDAPL protests, which began in April 2016 and continued into the bitter winter of 2017, were in resistance to Energy Transfer Partners’ plans to run a pipeline from the Bakken oil fields of North Dakota beneath the Missouri and Mississippi rivers, crossing the traditional lands and sacred waters of the Standing Rock Sioux.

Indigenous Nations and peoples led a campaign that called forth international solidarity, resulting in the presence of thousands at Standing Rock, marches and resolutions in distant cities, and delegations from U.S. military veterans to union workers.

On May 30, Michael “Little Feather” Giron became the first #NoDAPL water protector to receive a federal prison sentence resulting from resistance to the pipeline.

Charged with civil disorder and use of fire to commit a federal felony offense, arising from events of Oct. 27, 2016, Little Feather entered into a noncooperating plea agreement. Under this, the use of fire charge — which carries a mandatory minimum sentence of 10 years and the possibility of up to 15 years in prison — was dropped, and Little Feather received a 36-month sentence for aiding a civil disorder.

According to the Water Protector Legal Collective of the National Lawyers Guild, which is representing the vast majority of those arrested, other water protectors are currently awaiting trial or sentencing.

Going to trial has been considered fraught with peril due to the impossibility of getting a fair trial before racist judges and juries. During the winter of 2017-18, Red Fawn Fallis, who was targeted by an FBI informer, felt that it was in her best interests to take a plea deal of seven years rather than face the possibility of a life sentence at trial. Red Fawn is awaiting sentencing on June 25.

Approximately 835 North Dakota state criminal cases resulted from the #NoDAPL movement’s efforts to stop Energy Transfer Partners’ Dakota Access Pipeline. Of those, 333 were dismissed, 24 were acquitted at trial, 153 were moved to pretrial diversion, 135 were plea agreements, and 19 were convicted at trial.

There are 171 North Dakota cases ongoing — under appeal, open, or under inactive or warrant status.

Other water protectors have also been charged, or may be under investigation, and are being represented by other counsel. These include Holy Elk Lafferty and Chase Iron Eyes, both of whom will use a “necessity defense,” claiming they had no recourse but civil disobedience due to the perceived threat of the pipeline.

Attorneys for water protectors are also fighting back in the courts, including ­filing a federal civil rights class action lawsuit, Dundon v. Kirchmeier, challenging police violence on the night of Nov. 20-21, 2016, at Backwater Bridge. The case, on behalf of all people injured by law enforcement that night, is moving forward in the U.S. District Court in ­Bismarck, N.D.

The fact that #NoDAPL water protectors continue to have to deal with charges against them speaks to the collusion of federal and state governments with the fossil fuel industry and major capitalist financial institutions.

In the U.S., it is well-known that many politicians, including Trump and others in his administration, have close ties to destructive resource extraction industries such as fracking and pipeline companies. The politicians and corporations have been using their power to reduce the size of public lands (which are really Indigenous lands) and to reduce protections from mining and drilling, such as at Bears Ears and Grand Staircase-­Escalante.

In Canada, Prime Minister Justin Trudeau’s Liberal Party administration announced at the end of May that Canada would buy the Trans Mountain tar sands pipeline and related infrastructure from Kinder Morgan for $4.5 billion. Canada could spend billions more to force through and build the pipeline expansion despite a lack of Indigenous consent and widespread public opposition.

Resistance to the pipelines has targeted the relationships between municipalities and financial institutions such as Wells Fargo and U.S Bank. This has led to worldwide divestment campaigns, successfully applying pressure on Seattle and other cities to cut ties with banks and institutions funding pipeline companies such as Energy Transfer Partners.

Indigenous peoples come from and are intertwined with the land and water, and have defended the land and water from colonial exploiters for generations. The struggle at Standing Rock was not the first or last time this will happen.

Since the last camp closed at Standing Rock in 2017, water protectors have continued to use every means at their disposal to fight all forms of destructive fossil fuel extraction and mining. More than 100 Indigenous Nations have signed onto the Treaty Alliance Against Tar Sands Expansion. This is a pledge to oppose all pipeline projects in the U.S. and Canada that would lead to a major expansion of the Tar Sands, including Kinder Morgan’s Trans Mountain, TransCanada’s Energy East and Keystone XL, and Enbridge’s Northern Gateway and Line 3 pipelines.

There is resistance throughout the Americas, in Ecuador and Mexico, in Louisiana and the U.S. Midwest, in the Canadian provinces of British Columbia and Nova Scotia. Water protectors build tiny houses to block pipelines’ paths and put their bodies on the line, and sometimes drilling equipment mysteriously gets damaged.

Indigenous Nations need to be at the forefront of all movements to protect the land and water. This resistance will only increase and be joined by millions more people as pipeline explosions and leaks occur even more frequently, proving a key point made by all the water protectors: Pipelines are dangerous and inevitably leak.