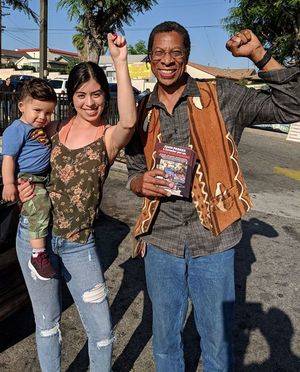 John Parker and a voter outside a polling place in Los Angeles.

John Parker: I was nominated by the Peace and Freedom Party, a coalition of socialist and left organizations, that especially allows socialist candidates to use its ballot status to run for office in California.

SS: What was the main message of your campaign?

JP: WWP was not running a candidate to in any way legitimize the election process. I was running to expose this bankrupt system and help motivate a movement independent of the Democrats and Republicans — the two parties of the ruling class — whose politicians are bought and paid to enable a system that increasingly gives us nothing but poverty, war and racism.

I wanted to make sure we hit some of the main contradictions of capitalism that need to be fought in order to unify our class and expose the barriers to moving humanity forward.

The first point on the platform was that I would immediately call for a state emergency to be declared in Black and Brown neighborhoods to stop police murders of Black and Brown youth. The second was to call for an immediate cessation of U.S. wars and proxy wars and divert the funding to vital social programs and for use in programs to reverse environmental damage. The third was to institute a referendum calling for the conversion of privately owned vital industry into public ownership.

SS: That’s a great platform. How was it built and how was it received?

JP: We were really happy with the response. There’s no doubt that it was a reflection of the growing problems imposed because of the crises of capitalism. In the official voter guide, I was able to reach 19 million people with a message calling for ending capitalism and not supporting its enablers in the Democratic and Republican parties.

The overwhelming response was positive and drew many new activists to the campaign. A Black woman who leads a Democratic club in northern California called me to say she voted for me because I was the only one bold enough to mention white supremacy. This campaign was endorsed by one of the most important grassroots Latinx organizations in Los Angeles, Unión del Barrio, because it addressed the fascist-like attacks against the migrant community and understood the roots of the refugee and migrant crisis: U.S. imperialism. I was also endorsed by the California Green Party and various socialist parties — a reflection of how the campaign was helping to build left unity. It was also endorsed by prominent Black officials in the labor movement.

People live in fear of cops on the streets, right-wing violence encouraged by Trump, and just the stress of trying to survive when all jobs being created are low-pay, rents are spiking and people are sleeping on sidewalks in record numbers. Hundreds on social media and in person told us they were voting for this campaign, which was openly socialist. We made sure that it was clear in our message that socialism means a complete displacement of capitalism and replacing it with a real workers’ society.

SS: The Democratic and Republican parties dominate U.S. politics so thoroughly. Why would a longtime left activist and leader run?

JP: Many people working in the electoral arena struggle to justify their continual defeats trying to “take over the Democratic Party.” They are confined by an idea that you have to stay within what the ruling class allows.

Capitalism itself wasn’t brought about using the vehicles allowed by the ruling monarchs during feudalism. It came into being when feudalism could no longer expand production. In other words, it could no longer produce what society needed, and poor farmers became the motor force of the revolutionary struggle that brought about capitalism, which was able to expand production. But, due to capitalism’s internal contradictions, it can no longer do that. In fact, it now deters the production of society’s basic necessities.

This is why half of the world lives on $2 to $10 per day and wages have gone down for the past 40 years. There are no livable-wage jobs for the majority, and 40 million people in the U.S. live in poverty, while 2017 saw the greatest increase in the number of billionaires. Capitalism is not only ripe, it’s overripe to be replaced by another system that puts working people at the helm. But to avoid this we’re taught to ignore the power of the working class and how workers create wealth.

Here’s an example. In 2006, a racist bill — H.R. 4437, the Sensenbrenner bill — would have severely hurt migrants in this country. The migrant community organized a protest of 1 million people on March 25, 2006, and then again on May 1, 2006. On that day, they withheld their labor and corporations lost hundreds of millions of dollars. Those actions brought back May Day in the U.S. and defeated the Sensenbrenner bill without lobbyists or legislative battles — just the power of workers withholding their labor. Electoral politics is a tool, but it can’t be the only tool.

SS: What would you do if you got elected?

JP: If I got elected, I would use the amplified voice I would have to expose not only the influence of the financial and industrial monopolies who run the politicians, but the war crimes and crimes against humanity and against our class both here and abroad.

I’d expose the fact that 8 million people from Yemen are expected to starve to death because of the U.S. war in cooperation with Saudi Arabia, while every few hours Black and Brown people here are murdered by racist genocidal police. I’d expose the real reason jobs and livable wages are being kept from us and the simple solutions that are not allowed by the banks and corporations. In other words, I’d motivate the movement to take over the reins of power.

I’d probably be able to do that for a very limited amount of time, but it is the only thing I should be doing. Stopping global warming; endless wars by the police, Immigration and Customs Enforcement and the Pentagon; and racist, sexist and anti-LGBTQ violence all begin by exposing the forces that allow them to continue and empowering the people to act outside the boundaries of what’s acceptable. It’s the only thing these so-called progressive politicians should be doing in office. But instead they are enabling and encouraging compliance with this system.

SS: What is next?

JP: Our WWP branch in Los Angeles will continue to fight against imperialist domination of the world, from Palestine to Korea. We’ll be fighting against police terror and for workers’ rights, and to smash white supremacy, sexism and LGBTQ oppression — to further unify our working class and provide solutions and ideas that empower and educate our class toward the necessity of breaking with this system. The movement in the streets is where we’ll continue fighting.