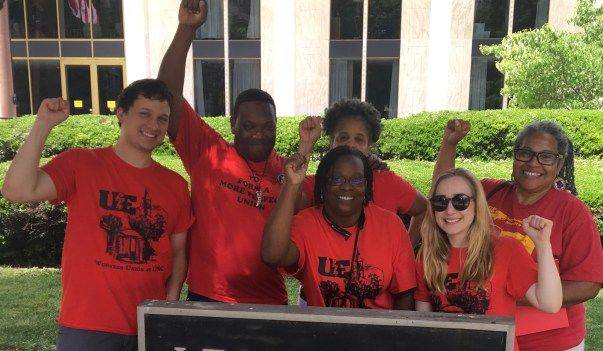 After several years of struggle, state workers in North Carolina secured a wage increase of up to $15 per hour when the state legislature adopted a Fiscal Year 2019 budget on June 1. If the maximum wage increase is paid, a worker’s yearly salary would be $31,200. The wage increase will begin on July 1, 2018.

Electrical Workers (UE) Local 150, North Carolina Public Service Workers Union, was the only organization fighting to raise the wages of the lowest-paid state workers at first, and they won.

The win results in over 10,000 housekeepers, food service workers, health care technicians, developmental technicians, transportation workers, groundskeepers and others getting wage increases of several thousand dollars. Many of these workers now earn only between $26,000 and $29,000. Prioritization of the lowest-paid workers was balanced by state employees who already made above $15 per hour receiving a 2 percent raise.

This victory came weeks after teachers and education workers across the state called out of work for a “personal day” of protest to demand more investments in public education and wage increases. Over 20,000 education workers rallied at the state legislative building on May 16, shutting down more than 42 school districts, affecting about 67 percent of the state’s public school students and canceling classes for more than 1 million students. However, public school workers are excluded from the June 1 raise, though state university workers and others will receive it.

The week of May 21, UE Local 150 called for a “Political Action” week, where members from across North Carolina pushed a workers’ agenda in meetings with state legislators. The Raising Wages Coalition held a “Lobby Day,” where over 100 people, including union members, seniors, immigrants rights activists, and members of other community and worker organizations, showed up for the main demand: to raise the minimum wage of all workers in the state to $15 per hour.

After passage of the 2019 budget, Nathanette Mayo, president of UE Local 150, said at a June 4 press conference, “While we certainly welcome these modest wage increases, we condemn the state legislature’s lack of transparency and the fact that the people did not have the opportunity to review the budget to voice their input.”

The historic wage increase, for which many had fought for many years, occurred in an election year when the entire state legislature is up for re-election. Mayo noted: “The Republican super majority was so arrogant that they felt they did not even need to bring the budget bill to committee, as is the usual democratic process in the legislature.” She continued, “Instead, it was simply brought to the chamber floor and voted up or down, without any open debates or amendments.”

Darrion Smith, a therapeutic support specialist at Central Regional Hospital, stated at the press conference, “These backroom deals leave state workers in the cold and are despicable.” Smith demanded: “Stop dividing state workers from teachers. We are all the same and should have all been granted at least a $3,000 raise.” Smith is chair of the UE Local 150 Department of Health and Human Services Council.

The NC Justice Center, which monitors the General Assembly closely, stated in a press release: “They raided federal money intended to extend the reach of programming to young children, and they cut off rural counties with high poverty from tools to revitalize.” This is a reference to $50 million from the federal government meant for pre-K programs, which was spent elsewhere to appease the legislators’ political base.

The Justice Center continued: “They failed to put state dollars toward health care as needed, and they earmarked millions for special interests rather than invest in services for all. They missed the chance to make genuine progress on investing in each child’s education. This new low is a missed opportunity for our state, made worse by the fact that they kept in place $900 million in new tax cuts that will begin in January 2019 and force more bad choices in the future.”

These additional tax cuts, added to annual revenue losses since 2013, mean an estimated $3.5 billion less in revenue each year to fund community and voter priorities like protecting children from abuse, building healthy schools, serving seniors meals, protecting the water and air, and training the future workforce, according to the Justice Center

In 2017, the North Carolina General Assembly passed a draconian revenue plan slashing taxes on corporations to only 3 percent, and to 5.5 percent on the income of wealthy individuals. This gave North Carolina the lowest corporate tax rate in the U.S.

In 2018, the legislators cut those taxes even further, so corporations pay only 2.5 percent. This gutted over $900 million from the state budget, using the claim the money wasn’t needed because there was a “surplus.”

But this so-called surplus does not account for the billions of dollars for state programs cut since the 2008 capitalist crisis. Meanwhile, Republican legislators are now attempting to add a work requirement for Medicaid recipients.

Additionally, the Republicans in “leadership” will create a permanent revenue crisis for the state if they succeed in their attempt to add a permanent cap of 5.5 percent on personal income taxes. They have introduced a “Tax Payers Bill of Rights” to insert into the state constitution. If passed, this amendment would have to be voted on in a state referendum in the November elections, giving the right wing a key issue for mobilizing their base.

But state, city and other workers across the state and country are fighting back.

UE Local 150’s statewide membership continues to grow in North Carolina as more workers engage in union actions across the state, from Charlotte to Kinston. The largest mobilization of city workers in decades occurred in April, as over 300 Charlotte city workers flooded City Hall twice during budget hearings.

On June 11, fast food workers took the lead, rallying at the state legislature. They were acting as part of the Poor People’s Campaign, focusing that day on the theme, “Everybody’s Got the Right to Live: Education, Living Wage, Jobs, Income, Housing.”

Hundreds have already been arrested in nonviolent civil disobedience as part of this 40-day national campaign of “moral outrage” against racism, poverty, militarism and environmental destruction. The Poor People’s Campaign actions will continue through June 23, when there will be a national convergence in Washington, D.C.