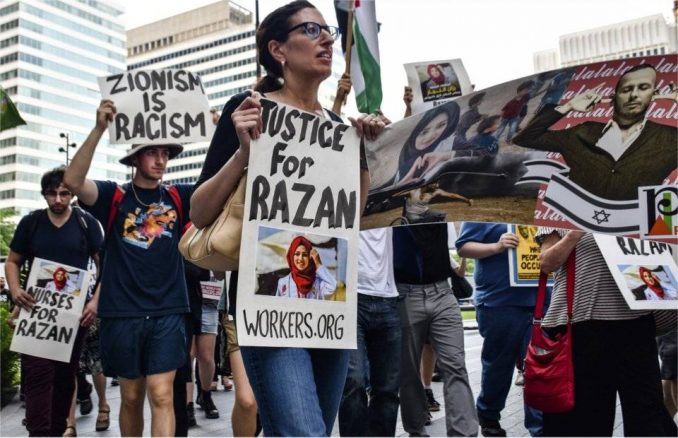 As demonstrators gathered outside the Municipal Services Building in Philadelphia for a solidarity protest with Palestine on June 8, passersby were drawn to a large display of photos of Razan al-Najjar, the 21-year-old nurse murdered by Israeli snipers while providing emergency medical support at a protest in Gaza on June 1. Razan, who lived less than 100 meters from where she was shot, was not the first Palestinian medical worker killed by Israelis in the weekly border demonstrations that began in late March.

The Philadelphia Don’t Orchestrate Apartheid campaign called on supporters to heed the call from Palestinians in Gaza to join in an international day of protest and solidarity: “We urge all free people everywhere to join the Palestinians by organizing solidarity events to demand that their governments exert pressure on Israel to end its oppression and occupation of the Palestinian people.” June 8 marked the 70th anniversary of Israeli forces’ violent seizure of Jerusalem.

The PDOA coalition specifically reached out to nurses, paramedics and other medical workers to stand in solidarity with al-Najjar to honor her memory and to stand up for medical workers in Gaza and around the world. Their call received messages of solidarity from health care workers, including members of Rebellious Nurses and the Pennsylvania Association of Staff Nurses and Allied Professionals.

Since April 6, activists in Philadelphia have made international headlines with weekly demonstrations opposing the Philadelphia Orchestra’s apartheid tour in Israel. The orchestra is now back, but the overwhelming message from the protesters was “we are only getting started.”

A march following the rally stopped outside City Hall, where speakers addressed the reality that the genocide in Palestine is funded by the U.S., at the same time that Israeli soldiers are training police in Philadelphia. One demonstrator’s sign read, “Their snipers train our cops.”

The demonstration ended at the Kimmel Center on south Broad Street, where the orchestra performs. Police at the site were prepared to block protesters with stacks of barricades. Protesters ignored the fences, filled the sidewalk outside the center, and took over the southbound lane of Broad Street, handing out flyers to people in cars passing by.

Speakers noted that on June 6 the orchestra played for Israeli Defense Forces soldiers, including those who may have murdered al-Najjar, totally ignoring their crimes. The orchestra’s “cultural” visit made no mention of al-Najjar’s death. Their overall messaging has been about the “sanctity of the concert hall.”

Meanwhile, when demonstrators disrupted a football practice in Barcelona on June 6 after Israel announced it was moving a soccer game between Israel and Argentina from Haifa to Jerusalem, players didn’t respond by talking about “the sanctity of the football pitch.” They responded by boycotting Israel.

The Electronic Intifada reported: “Argentina’s newspaper Clarín confirmed that when protesters using a megaphone called individually on players not to take part in the match during a practice in Barcelona it had an impact.

“‘The players looked at each other surprised. The megaphone began to name the names of the Argentine stars one by one, starting with Messi. The request, never with grievances, was the same: ‘Do not play that game,’ Clarín reported. ‘It was no longer possible to be indifferent to what was happening.’” (June 6)

If only the Philadelphia Orchestra management had as much integrity.