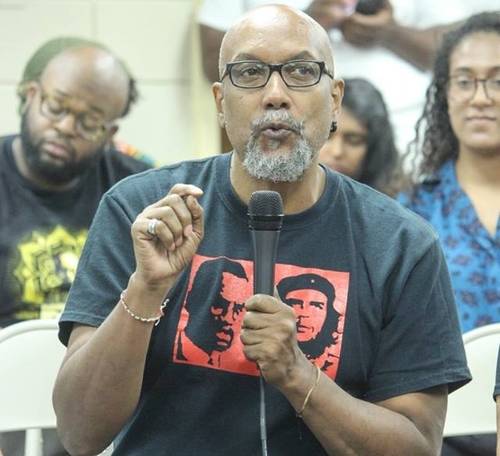 The irony of the first full-blown demonstration against a speaker at the Left Forum in New York City being aimed at a Black anti-imperialist calls into question the motivations of supposedly anti-genocide protesters.

An article being circulated throughout the conference weekend on June 1-3, as well as a walkout protest during the closing plenary of the annual event, decried Black Alliance for Peace national organizer Ajamu Baraka’s support for the Syrian state.

Syria has been devastated by a seven-year, U.S.-led intervention that has armed so-called rebels and created millions of refugees. An international attempt to investigate Syria for allegedly possessing chemical weapons, used to allegedly commit genocide, was thwarted by an April 13 attack by a U.S.-led coalition that included France and the United Kingdom.

Protesters at the Left Forum called Baraka an “Assadist” and a Trump supporter, as well as a “genocide denialist.”

“This was not an attack against me personally, but against all of us who take an uncompromising stance on U.S. and European imperialism,” Baraka said. “The Black Alliance for Peace will continue to call out the petty-bourgeois moralism that aligns itself with the humanitarian fiction of the ‘responsibility to protect’ — the 21st century version of the ‘white man’s burden.’”

The United National Antiwar Coalition issued the following “Defense of Anti-Imperialism” on June 6:

“Two organizations used Ajamu Baraka’s presence at the recent Left Forum in order to attack anti-imperialism itself. They falsely accuse him of being a defender of genocide and a Donald Trump supporter as a ruse to hide their support of imperialism as carried out not just in Syria but around the world.

“Ajamu Baraka’s history of activism and his role as National Organizer and National Spokesperson for the Black Alliance for Peace demonstrate a commitment to democracy, justice, and the rights of all people to self-determination.

“United National Antiwar Coalition is a partner with BAP on initiatives such as the Coalition Against U.S. Foreign Military Bases. BAP is also represented on the UNAC Coordinating Committee. The two groups work together because we share the same determination to end U.S. state-sponsored violence wherever it is carried out. In just one year since its founding, the Black Alliance for Peace has made great strides in reviving the black radical tradition of opposing ‘the greatest purveyor of violence in the world.’

“While the lies and vitriol directed at Ajamu Baraka were not strictly personal, they were in essence attacks carried out against this black-led movement as well. BAP’s success in a short period of time makes it a target of faux leftists, whose goal is to legitimize U.S. foreign policy while cynically appearing to oppose it. The attempt to silence a leading black anti-war organization is therefore racist and makes their actions all the more insidious.

“These organizations reveal themselves to be supporters of the U.S. hegemon, telling slanderous falsehoods in order to hide their true political stance. They have a history of disrupting anti-war actions and forums hosted by UNAC and others whenever an anti-imperialist position on Syria or other issues are being discussed.

“UNAC stands with everyone who is clear about the necessity of ending the U.S. goal of reaching full-spectrum dominance in Syria and everywhere. As such, it is vital for us to stand with Black Alliance for Peace and against any effort to denounce its work and its leadership. We encourage other organizations to add their names to this statement or to issue their own statements of support and solidarity.”

Varughese is a communications adviser for Black ­Alliance for Peace.