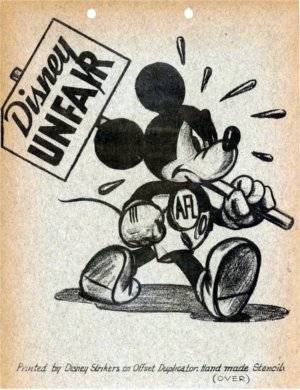 This year tens of thousands of workers at Disney resorts have opened up a struggle to counter the drop in inflation-adjusted pay that has left 85 percent of the workers earning less than $15 an hour. Many workers depend on government programs to survive. (To learn more about this struggle, read Kuhlenbeck’s previous WW article at tinyurl.com/y8q3p3xz/.)

The current battle is on, but its long history begins with its notorious founder, Walt Disney. “Uncle Walt” is celebrated as the visionary responsible for an entertainment empire “bringing joy to millions.” But the truth about him is far different: He was a union-busting, FBI snitch and his politics were self-serving.

The myth of the ‘self-made’ mogul

Walt Disney (1901-1966) was born in Chicago. He began his career as a cartoonist and commercial illustrator. At the suggestion of his brother Roy, Disney moved to California in 1923. Together they formed the Disney Brothers Cartoon Studio in Burbank, which changed its name to the Walt Disney Studio in 1929. The company went on to become the largest animation studio in the world and later a media empire.

Disney may have called himself a “self-made man,”  but hundreds of animators toiled in the studio to bring fantastic visions to the screen. Despite the many contributors, Disney was the one who received the credit, the accolades and the awards. Disney was not a “self-made man,” as the success of his company would not have been possible without the labor of those he exploited.

Animation Guild President Emeritus Tom Sito told Workers World, “I’m sure the public thought he drew everything by himself. While in actuality, he personally stopped drawing in the 20s, when he could hire better artists.”

Despite Disney’s opposition to unions, the 1941 Disney cartoonists’ strike brought the union shop to the company. Disney became more aggressive in his anti-worker politics, but his political views were always troubling.

Anti-Semitism and flirtations with fascism

Walt Disney often resembled a villain from one of the films he produced. Coinciding with an anti-Semitic world view, he was a member of the isolationist “America First” movement and flirted with pro-Nazi elements before World War II.

As Disney animator Arthur Babbitt told Marc Eliot, the author of “Walt Disney: Hollywood’s Dark Prince” (1993): “On more than one occasion I observed Walt Disney and [attorney Gunther Lessing], along with a lot of other prominent Nazi-afflicted [sic] Hollywood personalities. Disney was going to meetings all the time.”

The meetings were for such groups as the American Nazi Party and the German American Bund. According to Eliot, Disney was likely trying to mend financial relationships with Nazi Germany so his films could be sold to their market. However, the real picture of a bigot willing to do business with the regime cannot be airbrushed from the historical record.

Not surprisingly, Disney was an admirer of auto-industry tycoon Henry Ford. Ford was a fellow anti-Semite and union-buster who reciprocated Disney’s admiration by telling him “he was a successful self-made protestant in a field dominated by Jews,” as quoted in Eliot’s book. Another Ford admirer was Adolf Hitler, who awarded Ford the Grand Cross of the German Eagle.

FBI snitch and the Hollywood Blacklist

After the war, and having rebranded himself as an anti-Nazi patriot, Disney carried out the bidding of the crypto-fascist FBI Director J. Edgar Hoover.

Disney’s reactionary credentials made it likelier for the long-reigning FBI director to enlist Disney’s services as a domestic spy.

As noted by Eliot, “His assignment was to report on the activities of Hollywood actors, writers, producers, directors, technicians, and union activists the Federal Bureau of Investigation suspected of political subversion.”

The bureau recommended that Disney be a contact for the Los Angeles Bureau’s Special Agent in Charge, as stated in an FBI memo from Dec. 16, 1954. His relationship with the FBI lasted from 1940 until his death in 1966.

Disney led a personal crusade in stamping out political dissent, especially in Hollywood. As vice president of the Motion Picture Association, Disney wrote a letter to U.S. Sen. Robert Reynolds (D-NC) urging Congress to investigate “the flagrant manner in which the motion picture industrialists have been coddling Communists.” (March 7, 1944)

When Congress investigated Hollywood in the late 1940s, Disney acted as a “friendly witness,” testifying before the House Un-American Activities Committee in an anti-Communist offensive that led to the Hollywood Blacklist. Accusations of having Communist ties or sympathies were used to deny employment to many entertainment professionals through the late 1950s. Disney ratted out artists in his own industry, including his animators.

HUAC was created in 1938 to investigate all “subversives,” including Nazis who, especially during World War II, were considered traitors. But its members soon focused their attacks on Communists and even on members of the Franklin Roosevelt administration who opposed the Rome-Berlin-Tokyo Axis during the war. Disney had no qualms throwing his peers into the flames stoked by the hunt for Communists.

Workers in the Disney Kingdom are still fighting the forces of corporate greed, fascism and exploitation today. Only by understanding the history of the workers’ struggle will they be able to win future victories.