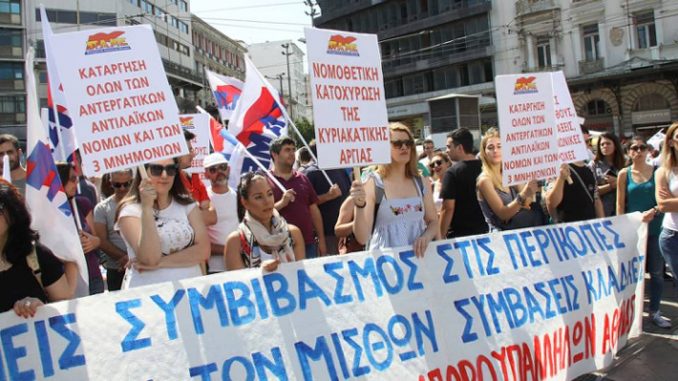 March of PAME workers in Athens.

The 49th general strike called in Greece since its financial crisis hit in 2008 shut down the country for a day on May 30. Although some local buses and trains were running, most other government services, like the ferries to the Greek islands were not. Schools were closed. Flights were delayed or canceled and railways were shut down.

The General Confederation of Greek Workers (GSEE) and its ally Civil Servants’ Confederation (ADEDY) initiated the call for the general strike to protest “austerity, unemployment and overtaxation.” The other major Greek labor confederation, the All-Workers Militant Front (PAME), issued a separate call for a general strike on the same day to demand “increases in wages, pensions, and social benefits” and raising the monthly minimum wage to $878. It’s currently $800 a month, and it hasn’t been raised in a year to reflect inflation.

Thousands of workers participated in each of the separate demonstrations organized by GSEE and PAME in Athens during the strike. PAME held a big demonstration in Thessaloníki, Greece’s second largest city, and organized strike gatherings in a total of 67 Greek cities.

The PAME demonstration in Athens was militant. The main slogan was “Your growth is crashing our lives! Struggle, organization and counterattack is our choice!” In all the PAME demonstrations, speakers condemned the participation of the Greek government in imperialist interventions and wars.

The Syriza government, despite the major protest on May 30, still intends to cut pensions again in January 2019 and to raise taxes to new levels in 2020. While the bailouts facilitated by the “troika” — the European Commission, European Central Bank and International Monetary Fund — are scheduled to end this year, financial controls will continue for the foreseeable future. The attacks on Greek workers will continue. But so will their protests.