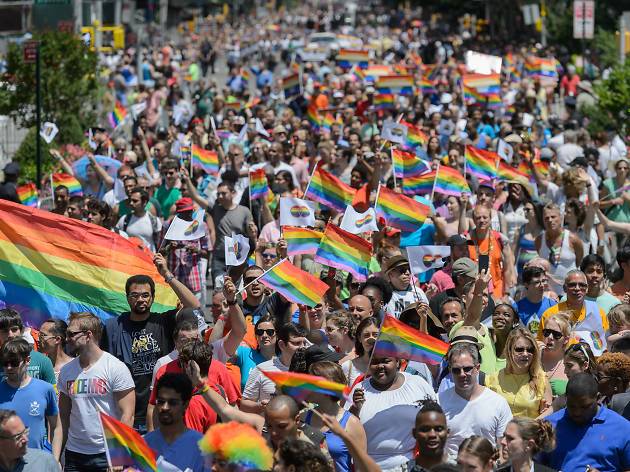 “It’s only a cake.” Some people say that about the June 4 U.S. Supreme Court decision ruling in favor of a Christian baker who refused to make a wedding cake for two gay men.

But it was no accident that the decision, Masterpiece Cakeshop v. Colorado Civil Rights Commission, was delivered on the first Monday in June, LGBTQ Pride Month. Delivered like a fist in the face of LGBTQ people everywhere.

Some commentators are trying to minimize the blow by noting the ruling was “narrow,” based on a minor “procedural” point. Others point to how justices also solemnly affirmed the “need to protect” LGBTQ rights. For instance, Justice Anthony Kennedy said “that these disputes must be resolved with tolerance, without undue disrespect to sincere religious beliefs, and without subjecting gay persons to indignities.”

The words whitewash the raw, brutal history of “sincere religious belief,” i.e., Christian belief, used in the U.S. alone to justify unrelenting massacres of Indigenous peoples, kidnapping of their children, theft and desecration of their lands. This Christian “sincere belief” justified the kidnapping, enslavement, torture and theft of the labor of millions of African peoples and the murderous colonization of more billions in their homelands around the globe.

Within living memory, the “sincere religious belief” of Christianity made rape within marriage legal —  “the duty of the wife to submit.” To this day, this “belief” is used to create barbed-wire laws to keep women from making decisions about their own bodies and reproductive lives.

In 1987 an infamous SCOTUS decision re-asserted that lesbian and gay people were felons because their sexual lives were a crime — against Judeo-Christian tradition. The Supreme Court upheld “sodomy laws” that justified LGBTQ people being evicted from their homes, fired from their jobs, denied medical assistance and public accommodations, having their children taken away and being forbidden to ever see them again — and more.

Historically, the use of reactionary Christianity has always been to uphold the ruling class — and 21st century U.S. is no exception.

The presence of extreme right-wing Christian forces in the Trump administration is no secret. Vice President Mike Pence, Attorney General Jeff Sessions and other administration figures are linked to Christian nationalism and aligned with the billionaire Koch brothers, the Bradley Foundation and other capitalists. Their agenda is to reconfigure the U.S. as a “Christian nation,” one where their class can impose austerity and extract maximum profit from workers and oppressed people.

So the recent SCOTUS “cake” case is far from trivial. It signals to right-wing forces that the highest court of the land is willing to use the fig leaf of religion to hide the crimes of the current capitalist system.

Though Supreme Court decisions in 2003 and 2015 decriminalized “gay sex” and legalized same-sex marriage, these victories were no “gift.” It took massive organizing in all sectors of LGBTQ communities to force the federal government to concede the new rights.

This Pride Month, let’s heed the alarm raised by the recent Supreme Court decision and redouble organizing for LGBTQ liberation at all levels. In 31 states, LGBTQ people can still be fired, evicted or denied services because of their sexuality and/or gender expression.

Some states still have vicious laws targeting trans people’s access to a bathroom, a basic need. The U.S. Department of Health and Human Services recently announced it would “more vigorously” protect “religious freedom.” These code words would allow medical providers to deny treatment to LGBTQ people and families.

Right now, right-wing attacks at the federal level are not most visibly against LGBTQ people. Across the country there are outright cop murders of Black and Brown people and racist persecution of im/migrants and asylum seekers when border guards arrest them and tear children, screaming in terror, from their parents’ arms.

With the pretext of “austerity,” the government has waged attacks from Wisconsin to Puerto Rico on education workers and on secular public education for a decade.

This Pride Month offers a chance to strengthen solidarity and build power with all those under attack by hateful right-wing forces. Let’s use this month to build that solidarity. Let all the banners of people fighting back against right-wing oppression fly together. That would indeed be an LGBTQ liberation march to be proud of.