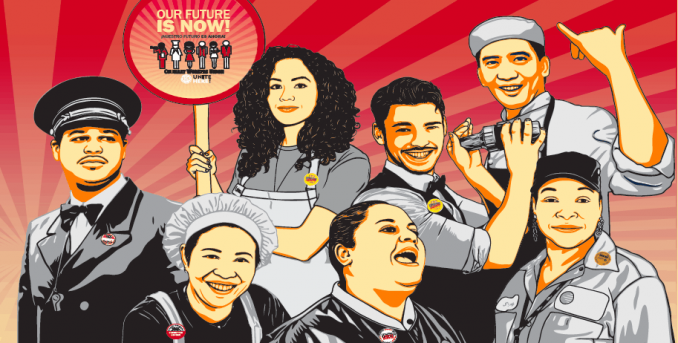 Some 99 percent of Culinary Workers Local 226 and Bartenders Local 165 members voted May 22 to strike if they didn’t get a decent contract by the May 31 expiration date of their current contract with the two biggest Las Vegas casino-hotel groups. As a result, MGM Resorts International and Caesars Entertainment folded over the weekend and reached agreement with the unions.

While details of the agreement were not published as of June 4, the 50,000 workers — bartenders, housekeepers, cocktail and food servers, porters, bellmen, cooks and other kitchen staff, the majority immigrants and female — demanded a wage increase of 4.2 percent effective June 1 and 4 percent annual increases thereafter under the 5-year contract. They also sought improved job security against increasing use of technology at the 34 hotel-casinos and strengthened language against sexual harassment.

“The companies are making millions and millions of dollars,” said Local 226 Secretary-Treasurer Geoconda Arguello-Kline. “They are growing and that’s excellent. We want them to share with the workers their success.” (culinaryunion226.org, June 2) The billionaire companies caved because they knew from the unions’ many rallies, walkouts and protests that they meant business. It’s estimated that the casinos could have lost up to $10.5 million a day; they lost millions during the 67-day strike in 1984. That’s the workers’ power behind the strike threat!

Skilled workers, represented by Machinists Local 818 at metal packaging manufacturer Tecnocap in Glen Dale, W.Va., have been striking since voting down the company’s austerity contract offer on April 9. Tecnocap wants to end all union job classifications, kick a third of the bargaining unit off the contract, and make workers pay 50 percent of their health insurance premiums, among other crimes. Workers voted to strike instead, and Local 818 has filed an unfair labor practice suit with the National Labor Relations Board.

While the company continues to refuse to bargain, local unions rallied behind Local 818 on May 29. District 54 President & Directing Business Representative T. Dean Wright said, “Until Tecnocap is prepared to enter into lawful bargaining for a fair contract … we’ll continue to be on this picket line.” The secretary-treasurer of the West Virginia AFL-CIO denounced the state’s right-to-work (for less) law which “brought some of these issues on.” He condemned its “slow attack on all workers. We’re fighting back together.” (wtrf.com, May 29)

West Virginia newspapers had refused to cover the strike under orders from anti-worker newspaper owner and casino billionaire Bob Nutting, who also owns the Pittsburgh Pirates. (He’s facing a Major League Baseball grievance for violating its collective bargaining agreement.) However, after Payday Report exposed this censorship, one Nutting-owned newspaper covered the strike and others followed. (PayDay Report, May 25 and 29) Defend workers’ right to strike!

St. Louis drivers dealt a ballot blow against one of the most toxic multinational corporations, Transdev, by voting 68 percent to join Food & Commercial Workers Local 655 on May 17. These drivers provide shuttle services to patients and medical workers at Barnes-Jewish Hospital as well as students at Washington University. The drivers told union organizers they need more respect at work, higher wages and better vacation time. (St. Louis Post-Dispatch, May 17)

While celebrating their victory, the drivers should be aware of the history of Transdev’s parent company, Veolia, a French-based corporation with a long record of violating human and labor rights globally. The largest privatizer of public services in the world, it routinely overcharges residents for once-public services like water, while underinvesting in infrastructure. Veolia/Transdev has supplied water to illegal settlements in Jerusalem as well as provided Israeli-only transportation to illegal settlements in the West Bank. But unions like the Boston School Bus Drivers, United Steelworkers Local 8751, have fought and won against this behemoth. Veolia/Transdev is surely smarting from this union victory, but it’s a win for everyone who has to work for a living.