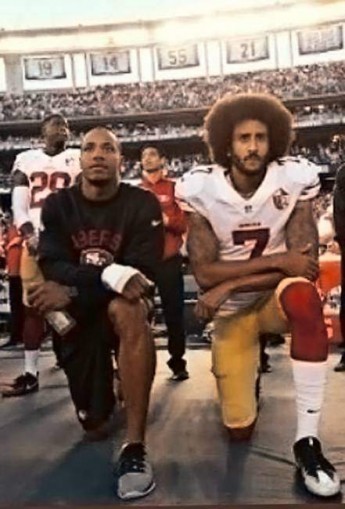 An overwhelming majority of the National Football League’s 32 CEOs voted on May 23 to ban peaceful protests by players in the form of kneeling during the playing of the national anthem in the upcoming 2018-19 season. Only Jed York, owner of the San Francisco 49ers, abstained.

Since former 49ers quarterback Colin Kaepernick began to sit and then kneel at the beginning of every game during the 2016-17 season to protest racist police brutality, his actions became, and continue to be, a source of national debate that have transcended the sports world. Kaepernick actually began to protest during the 2016 preseason immediately following the police murders of Alton Sterling in Baton Rouge, La., and Philando Castile in a suburb of St. Paul, Minn., both captured on video.

Once other African-American players joined the protests from other teams, bigot in chief Donald Trump took to Twitter in September 2017, aiming a vicious attack on all protesting players, calling them “sons of b—ches” and demanding that owners fire them. He called on fans to boycott the games.

Trump has cancelled a June 5 visit to the White House by the current Super Bowl football champions, the Philadelphia Eagles, because a number of this team’s players, most notably, Malcolm Jenkins and Chris Long, refused to attend due to their opposition to Trump’s reactionary view on the NFL protests.

The NFL Players Association criticized the new rules: “The NFL chose to not consult the union in the development of this new ‘policy’” and the union will “challenge any aspect of it that is inconsistent with the collective bargaining agreement.” (thehill.com, May 23)

The owners, along with Trump, have attempted to change the narrative of the protest’s origins from opposing police murders of unarmed Black and Brown people to disrespecting the U.S. flag and the military. Once Trump’s attacks elevated this false narrative, even members of the military — both retired and rank and file — defended the players’ right to protest based on the First Amendment.

The owners have not only scapegoated the protesting athletes in the name of defending “patriotism,” but have also blamed these conscious athletes for the games’ declining TV ratings and ticket sales. These games are played in stadiums named after banks and corporations and located in affluent, mainly white suburbs.

Other Black athletes are targets

The vast majority of the billionaire and multimillionaire owners are white, while 70 percent of the NFL players are Black, wrote the Washington Post. Many of the players have personally experienced police brutality and mass incarceration many times in their young lives — so it is not a stretch that they feel a strong affinity for Black communities besieged by the police.

Take Michael Bennett, an outspoken activist, defensive end with the Philadelphia Eagles, and Super Bowl champion. Las Vegas police brutalized him last Aug. 26 following a boxing match. Videotape showed two cops chasing him, throwing him to the ground and pointing a gun to his head. According to Bennett’s statement on Twitter, the cops’ excuse for this act of brutality was that he was “simply being a black man in the wrong place at the wrong time.”

On the same day that the new NFL anti-protest policy was codified, the Milwaukee police released to the public a video cam of five white Milwaukee cops attacking and tasing twice Sterling Brown, a member of the National Basketball Association’s Milwaukee Bucks team, on Jan. 26. They cited him for a parking violation! While the Milwaukee police have publicly apologized to Brown, he is filing a lawsuit for violation of his civil rights on behalf of all known and unknown Black victims of police terror.

Kaepernick’s actions and the repercussions he has faced have been compared by many to Muhammad Ali losing his heavyweight title in the late 1960s for refusing to fight in the Vietnam War. Also, Kaepernick has inspired other athletes of all ages and other sports to protest injustice by kneeling on fields and courts all over the country.

Kaepernick and his former 49ers teammate, defensive safety Eric Reid have not been picked up by any team as of June of this year. Reid was kneeling right next to Kaepernick during every game this past season.

Many players have accused NFL owners of “blackballing” both players for taking a stand against racist oppression. There are rumors that some players plan to protest the new NFL rules during the upcoming season — and show solidarity with Kaepernick and Reid if they continue to be without jobs.

Kaepernick filed a grievance last October charging collusion by the NFL owners — with encouragement from Trump — in keeping him from finding work since he opted out of his contract with the 49ers at the end of the 2017 season. Meanwhile, less accomplished quarterbacks were hired. Kaepernick led the 49ers to Super XLVIII, only to lose to the Baltimore Ravens.