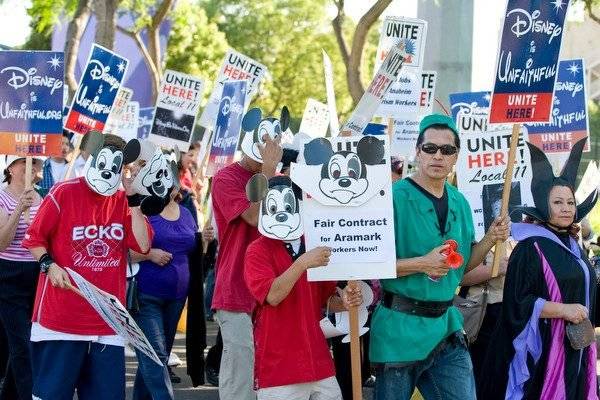 May 27 — The Walt Disney Company is an entertainment conglomerate with two famous amusement parks and resorts, Disneyland (Anaheim, Calif.) and Disney World (Bay Lake and Lake Buena Vista, Fla.). While both locations are touted by the company as “the happiest place on earth,” this slogan is challenged by workers struggling to make ends meet.

As reported in the “Corporate Rap Sheet” compiled by the Corporate Research Project, Disney “has a history of anti-union animus going back to its early years, has also faced criticism over its U.S. labor practices and has recently emerged as one of the leading corporate opponents of the campaign to enact paid sick days laws.” (www.corp-research.org/disney)

A survey published in February titled “Working for the Mouse” (referring to the company’s iconic mascot Mickey Mouse) describes the daily struggles facing roughly 30,000 Disneyland workers. According to the survey, 85 percent of Disneyland’s hourly employees do not make a living wage of $15 an hour. Many workers cannot afford such basic needs as food, shelter and affordable health care.

Another disturbing finding is that 11 percent of Disneyland workers are either homeless or have been homeless in the last few years. In addition, 56 percent of employees “are worried about being evicted from their homes or apartments.”

The survey was underwritten by the Coalition of Resort Labor Unions, comprised of 11 unions in various stages of negotiating contracts on behalf of Disneyland workers. One of the largest unions in this coalition is UNITE HERE Local 11, which represents nearly 5,000 food service and hotel workers, with 2,700 currently in bargaining.

Local 11 Press Secretary Andrew Cohen was a hotel worker during the last labor dispute with Disney, which involved negotiations from 2008 to 2012. He joined the union in 2009 and two years later helped organize union drives at restaurants and hotels in Hollywood. He joined the Disneyland campaign last October.

Cohen told Workers World: “The company is making record profits, but conditions for Disneyland’s workers have never been worse. Like so many places, workers are being squeezed by a rich company, and the entire city of Anaheim reflects it.”

A similar fight has been raging at Disney World, which has over 62,000 employees. The company agreed to a minimum wage of $15 an hour for union workers by 2021 and to $1,000 bonuses that had been withheld by the company from Service Trades Council Union workers during contract negotiations.  But Disney’s proposal includes the dropping of “key union protections” involving grievance procedures, holiday pay, overtime and scheduling.

Food and Commercial Workers Local 1625 President Ed Chambers told the Orlando Weekly: “Almost every one of those proposals was taking back benefits or conditions on employment we had bargained for over the last 45 years. They’re basically wiping out 45 years of progress.” (May 2)

According to Cohen, both Disneyland and Disney World have “seen a similar coalition formed between most of the unions at the respective resorts, and we have been working closely together. Many of our issues are nearly the same. The goal in both resorts is to stop the poverty at Disneyland and Disney World. Wages need to go up.  Disney can afford to pay all its workers a living wage.”

Disney CEO and Chairman Robert Iger has continued to apply the anti-worker convictions of company founder Walt Disney. “Uncle Walt,” as he is known in company lore, had a history of anti-Semitism, racism and labor abuse. He was also an enemy of unions. According to Marc Eliot, author of “Walt Disney: Hollywood’s Dark Prince,” “Disney discovered how the passions and power of political activism could be used as weapons for personal gain.”

In addition to continuing to organize and push for a fair contract, Disney unions also will be advocating for the Anaheim Living Wage initiative that may be on the ballot in November. As reported by the Orange County Register, “The measure proposes to raise the minimum wage for those businesses to $15 an hour next year, then rising in $1 increments annually, reaching $18 an hour by 2022.” (May 1)

“It’s ongoing,” Cohen said. “There is hope and workers are still asking Disney to do the right thing.”