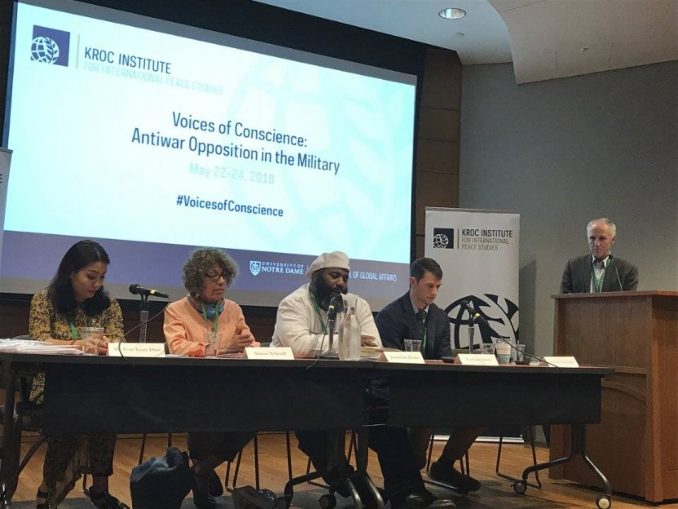 A three-day conference celebrating the history of the movement of active-duty U.S. Armed Forces members who opposed U.S. wars against Vietnam, Iraq and Afghanistan ended May 24 at the University of Notre Dame in South Bend, Ind.

While the Kroc Institute for Peace Studies provided an academic setting, the nearly 100 participants went beyond scholarly discussion. Many were themselves veterans from the front lines of the struggle, and plenty served time in stockades, brigs and military prisons for their resistance to war, racism and officers’ bullying. Civilian supporters also took their share of arrests. The racist cops in base towns of the rural South who served the interests of the Pentagon were able to arrest without regard for the law or the rights of the people involved.

Along with civilian supporters, the military veterans produced dozens of memoirs, histories and novels and at least three documentary films, including one opera, chronicling these struggles. These focused on the period beginning in 1965, when the U.S. began to send as many as 543,000 troops to occupy Vietnam, to 1975, when the last U.S. officials were driven out by the victorious Vietnamese liberation fighters.

That so many veteran political activists are still committed to preserving the history of their struggles and battling future wars can be credited to the historic struggle of the Vietnamese people.

The liberation struggle’s presence permeated the mood of the conference. Talks by Dr. Tran Xuan Thao, director of the War Remnants Museum in Ho Chi Minh City (formerly Saigon) and Madame Ton-Nu-Thi Ninh, president of the Ho Chi Minh City Peace and Development Foundation and former vice chair of Vietnam’s National Assembly Foreign Affairs Committee, reminded the participants of the patient diplomacy of the Vietnamese as they worked with all political currents to help win their independence.

Learning from the Vietnamese

Robert Chenoweth, a helicopter mechanic and sergeant captured during the 1968 Tet Offensive, talked about being held for five years; during that time he helped form a “peace committee” among the prisoners of war who taped anti-war statements. Chenoweth described how the Vietnamese treated them with more than humanity. “Indoctrination? They simply taught us  thousands of years of Vietnamese history as a nation.”

Then, barely able to speak through his tears, he said, “What they gave us to eat was more than twice as much as what the Vietnamese guards ate.” At that point Chenoweth wasn’t the only one in the room crying.

Film presentations featured Connie Field and her new film, “The Whistleblower of My Lai,” the story of Sgt. Hugh Thompson and his helicopter crew who stopped at least some of the killing when they turned their guns around (workers.org/2016/12/20/war-hero-dies); Academy Award winner Barbara Kopple and her films,“Winter Soldier” and “Shelter”; and David Zeiger and his film, “Sir! No Sir!”

Zeiger and Josh Gould, organizers at the Oleo Strut coffee house near Fort Hood, Texas, told their stories at the conference. (The “coffee-house movement” gave dissident or just unhappy GIs a place to meet near military bases.) Skip Delano, who returned from a tour in Vietnam, told of publishing the dissident newspaper, Left Face.

American Servicemen’s Union key organizer Johnnie Lewis, now transgender (male to female), told of publishing anti-war and anti-racist GI newspapers in and out of the Fort Dix and other stockades, where she organized mess-hall actions and refusals of service, along with Black GI Henry Mills during much of 1969.

“Within the concertina wire of the Fort Dix Stockade,” Lewis told one workshop, “the ASU, in alliance with GI members of the Black Panther Party, the Young Lords, and others, organized among the more than 2,000 prisoners, distributing copies of The Bond [ASU newpaper] and other anti-war/anti-racism literature, organizing mess hall strikes, speaking out in pro-imperialist indoctrination sessions, taking actions against cruel guards — dropping heavy footlockers on them from second-story stairwells — and organizing a prisoner-based justice system to take care of snitches. ASU member Terry Klug organized and led a rebellion of 200 prisoners in June 1969, burning down half the stockade.”

The ASU, said Lewis, showed clearly that the single most important focus of its organizing work among working-class GIs and rank-and-file GIs of color was where the GIs worked, were imprisoned, and fought and died.

Other heroes and sheroes of the Vietnam GI movement were present, including Pfc. J.J. Johnson, one of the Fort Hood 3 — the first publicized GIs who refused to fight in Vietnam in 1966 — who were sentenced to three years in prison. Also present was Lt. Susan Schnall, a Navy nurse who hired a small plane in 1969 and dropped anti-war leaflets on ships and military bases in California. Schnall currently organizes for Veterans For Peace and works to relieve Agent Orange poisoning in Vietnam and among U.S. veterans.

Resisting the war on Iraq

Members of the subsequent generation of anti-war GIs from the new professional U.S. military were also present. While GI resistance during the wars on Iraq and Afghanistan never reached the breadth it did in the conscript military of the Vietnam period, individual troops voiced their moral outrage and noted that at moments their organizing created problems for the Pentagon.

Army enlistee Camilo Mejia, author of “Road from Ar Ramadi,” whose family was from Nicaragua, was stationed in Iraq in 2003 following the U.S.-British invasion. He refused to return to the war after a furlough, was charged with desertion and was sentenced to a year in prison. Working in the Miami area,

Mejia fights against new imperialist wars and for the rights of immigrants in the U.S.

Jonathan Hutto, author of “Antiwar Soldier: How to Dissent Within the Ranks of the Military,” was a communications specialist in the Navy aboard the USS Roosevelt in the Persian Gulf in 2006. Hutto co-founded the Appeal for Redress, a statement against the Iraq War signed eventually by 2,000 service members. Hutto works against war and for African-American rights in Maryland.

Angie Hines was stationed on the guided missile USS Cowpens, which fired the first ordinance that opened the Iraq War. She speaks of harassment of women in the Armed Forces as she counters military recruiters in the Portland, Ore., area.

The three Iraq War veterans — who were themselves caught up in what could be called the economic draft — showed that the class struggle still exists in the professional military and that veterans can continue to play an important role in the struggle against imperialist war. Many do so today as part of Veterans For Peace or similar organizations.

Dozens of others contributed to the discussion, including Professor David Cortright, author of “Soldiers in Revolt” and, the organizer, with his Kroc Institute staff, of this effective conference; Harry Haines, one of the few out gay anti-war draftees; and James Lewes, creator of the GI Press Project that contains images and searchable text from thousands of documents (tinyurl.com/ycgjcqwe). For more information on the conference, see tinyurl.com/y9ftga4g.

Catalinotto is author of “Turn the Guns Around: Mutinies, Soldier Revolts and Revolutions.” He spoke at a conference workshop on “Issues of class, race and gender in resistance movements.”