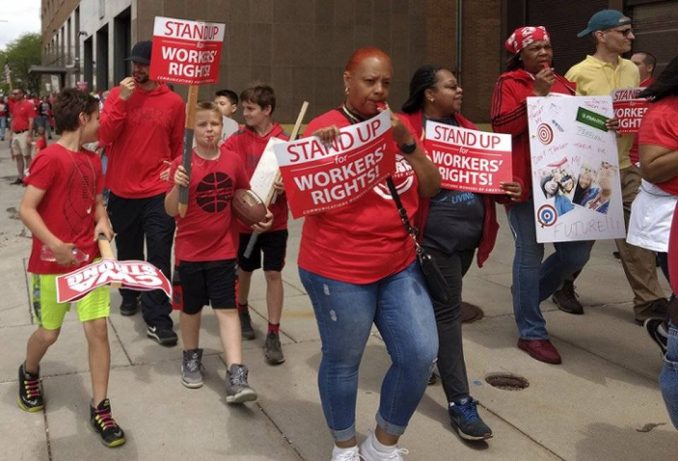 May 21 — The Communications Workers executive board authorized a strike on May 11 of 14,000 workers covered by AT&T’s Midwest and Legacy T contracts. The AT&T Midwest contract covers workers in Michigan, Ohio, Illinois, Indiana and Wisconsin, while the Legacy T workers are nationwide. The workers involved include both technicians and call center customer service employees. The strike authorization means workers can walk out at any time.

Issues include job security, health care and retirement. A report issued by the CWA on April 25, titled “AT&T Jobs,” notes that AT&T reaped profits of $29.5 billion in 2017, compared to $13 billion the previous year. (tinyurl.com/ybkemtu5) This massive increase resulted from a $20 billion boost from Trump’s Tax Cuts and Job Cuts Act of 2017, with an additional $3 billion jump in profits anticipated in 2018.

Despite this massive tax bonanza, AT&T announced plans to spend just $1 billion in capital projects and pay a paltry bonus of $1,000 to its workers. That amounts to a one-time $200 million expenditure or 7 percent of the company’s annual tax bonanza.

According to the report, AT&T has closed 44 call centers and laid off thousands of workers since 2011, leading to the destruction of 16,000 call center jobs nationwide. In Ohio, Michigan, Wisconsin and Illinois, the company has laid off 2,300 workers over the last three years. Much of the customer service work has been outsourced to low-wage contract workers, many outside the U.S.

In Michigan and Ohio, AT&T closed four call centers in the past two years. In 2011, over 1,000 people worked at these centers, located in Detroit and Port Huron, Mich., and Cleveland and Columbus, Ohio.

The story of the Port Huron call center speaks volumes about the treatment by corporations like AT&T of workers who were once employed in decent-paying union jobs.

The customer service workers at Port Huron, who had been employed in the call center before 2004, were paid a living wage of over $32 an hour. Many were women with high school diplomas. AT&T and its predecessors had been their primary employer after leaving school.

However, in approximately 2010, AT&T began a second, lower-tier wage scale for customer service workers. Instead of paying them $32 an hour and above ($34.70 in 2018), the starting pay was $10 per hour, with a maximum of $20 an hour after six years on the job. While some sales commissions were added to the base wage, it was nowhere near what the seniority workers were being paid.

Because workers hired prior to 2004 were guaranteed the higher wage for their lifetime, the company began a campaign to drive out the seniority workers. They made their jobs miserable, limiting calls to Port Huron to “retention” calls — the last calls by angry customers determined to switch to another company. Not only did the workers have to deal with irate customers all day long, but they were written up if they did not sell them new products.

On-the-job harassment for these seniority workers became so miserable that many began suffering from stress-related ailments. When they were forced to use the Family Medical Leave Act to survive and maintain their jobs and mental health, management initiated a policy of targeting FMLA users to run them out of AT&T, in violation of federal law.

Many of these workers, despite knowing they would never again earn a comparable wage, took early retirement, were terminated or just plain resigned because they no longer could stand management’s job pressure.

The bourgeois media might sometimes cover the just and long overdue struggles of low-wage workers, but the mistreatment and driving out of older workers, formerly in decent-paying union jobs, is an often overlooked aspect of the introduction of low-wage capitalism across the country.

If a strike occurs, the AT&T workers need and deserve the solidarity of the entire working class against this huge, rich, horrendous multinational corporation.