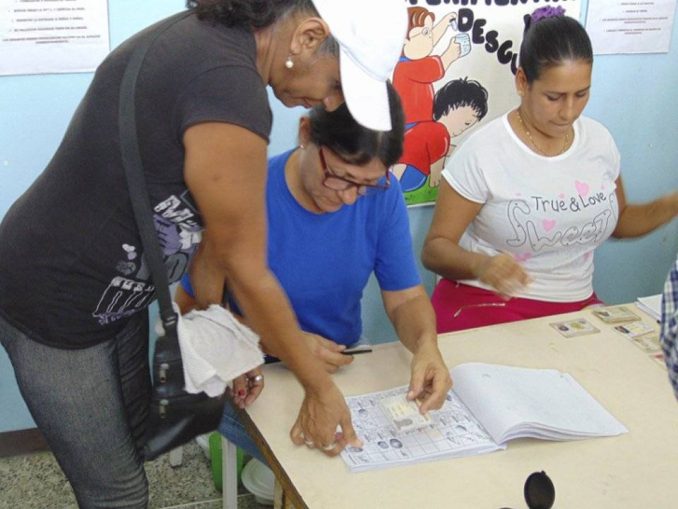 The real problem the U.S. imperialists have with Venezuela’s election is that it empowered workers, like these people checking IDs at the polls.

With an overwhelming 68 percent of the votes cast, President Nicolás Maduro was re-elected president of Venezuela on May 20 for a six-year term, starting at the end of the year.

Despite Maduro’s clear and clean election, Venezuela and its Boliviarian government were immediately denounced by U.S. imperialism and its reactionary allies in Latin America and Europe. On the other side, the Cuban, Bolivian and Salvadoran governments congratulated Maduro, and the Chinese and Russian governments recognized Maduro’s victory and called for no intervention against his government.

Speaking from the balcony of the Miraflores Palace, Maduro said, “It has been a heroic, beautiful, popular victory forged in the struggle.”

“I’m the president of all the Venezuelans,” he added. “I call for a dialogue process. Permanent dialogue is what ­Venezuela needs.”

“The revolution is here to stay!” Maduro later told the crowd, promising to prioritize the country’s economy and socioeconomic development during his new term and fight off imperialism — the external forces that tried to derail the country’s election. (TeleSur, May 20)

Reporting from Caracas on May 20, Workers World correspondent Andrew Mayton wrote: “We are in the midst of the Venezuelan presidential elections, and working people all over the world are on the edge of their seats waiting for the results. The U.S. ruling class has already declared they will not recognize the results, and the State Department is looking to implement oil sanctions.

“The U.S. ruling class wants to paint the election as illegitimate. But to the contrary, the Venezuelan government has invited delegates from all over the world — the U.S., Canada, several Latin American countries, Syria, Palestine and many more — to observe the elections and learn all about the electoral process. Among the many organizations invited was Workers World Party.

“The National Electoral Council (Consejo Nacional Electoral or CNE) took this delegation to see the assembly, programming, quality check and shipping of the electronic voting machines. The CNE gave presentations on electoral law and how it has changed since the 1999 constitution. Then the delegation visited several polling centers all over Venezuela.

“The electoral process is completely transparent and accountable, far more than what we have in the United States. Perhaps just as important, polling centers are more accessible than ever, often located right within everyone’s neighborhoods — there are over 34,000 polling centers for the over 20 million registered Venezuelan voters.

“Polling centers are overseen and audited by representatives of any and all of the political parties that are participating in the election.

“Be prepared for the wave of anti-Venezuela and anti-Maduro propaganda that the U.S. ruling class will push, and be prepared to bring your solidarity for the Bolivarian Revolution in Venezuela to the streets. U.S. hands off Venezuela!”

Even before the voting took place, U.S. imperialism showed its hostility by declaring the election illegitimate and refusing to recognize its results. All sectors of the U.S. corporate media denounced Maduro’s election as fraudulent — without any evidence.

A New York Times article on May 21, for example, called attention to the admittedly low turnout without mentioning that Maduro still received a significantly higher percentage of the total eligible voters than either Donald Trump or Hillary Clinton got in the last U.S. presidential election.

Other countries whose regimes also refused to recognize the Venezuelan election include Peru, Argentina, Brazil, Mexico, Panama, Paraguay, Santa Lucia, Canada, Colombia, Honduras, Costa Rica and Guatemala. The irony is that Honduras’ regime resulted from a military coup and electoral fraud, Brazil’s and Paraguay’s from a judicial coup, and Mexico’s from open electoral fraud.

From the other side of the class barricades, TeleSur reported that Cuban President Miguel Diaz-Canel Bermudez said in a letter to Maduro: “The Bolivarian and Chavista community has demonstrated once again its determination in defending the legacy of Chavez, who you represent worthily.” Diaz-Canel added that the Cuban government will be supportive and offered solidarity regarding any new challenges faced by Maduro’s government in the new six-year presidential term.

Bolivian President Evo Morales tweeted: “The sovereign Venezuelan people have triumphed again before the coup plotters and interventionism of the North American empire. The free peoples will never submit. Congratulations to brother Nicolás Maduro and the brave people of Venezuela.”

“The parties involved must respect the decision of the Venezuelan people,” said Chinese Foreign Ministry spokesman Lu Kang at a press conference in Beijing.

Alexánder Schetinin, director of the Latin American Department of the Russian Foreign Ministry, said: “We regrettably have to note that in these elections, in addition to the two traditional participants, that is, the Venezuelan people, the electors, on the one hand, and on the other the candidates who presented their programs … there was a third participant, the governments that openly called for a boycott of the vote.”

Schetinin also added that Russia is often accused of meddling in other countries’ elections, but in Venezuela’s case, some countries have meddled indiscriminately.

Winstead and Mundo Obrero/WW editor Berta Joubert-Ceci were in Venezuela observing the elections as part of an international delegation.