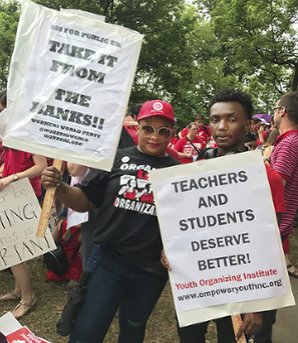 Let’s make this a long, hot summer for the bigots and the bourgeoisie.

This is the summer for strikes, for mass demonstrations, for making the bank buildings and paid-for legislative offices too hot to hold the financiers and the politicians who are wrecking our lives.

It’s not only their blowhard bluster and racist rhetoric. Yes, Trump said something horrifying, once again, actually calling im/migrant people “animals” and thereby invoking, yet again, centuries when enslaving human beings of color was supposedly justified by that word.

Such words are the distillation of ruling-class actions, orders, laws. All over the U.S. in the last few weeks, Immigration and Customs Enforcement has arrested and jailed hundreds of immigrant workers for the “illegal” act of trying to feed themselves and their families. And the administration’s planned revocation of temporary protective status would expel 300,000 legal immigrants, some after having been in the U.S. for 30 years.

Overwhelmingly, this administration is targeting Black and Brown people to “purge” from the U.S. in an act paralleling Ku Klux Klan campaigns of the 1920s to “clean up the nation.”

Let’s remember that the Klan also policed women, beating and whipping those who tried to lead independent lives. This week’s misogynist verbal battering came from the Texas lieutenant governor, who blamed the mass-shooting deaths at a school there on women having abortions.

Never mind the contradiction that most of the shooters involved in these U.S. massacres are white men, young and old — including the recent Texas shooter — who have a history of domestic abuse, stalking and hatred toward women.

We could go on and on with the list of attacks — on poor people, LGBTQ people, people with disabilities, people in unions.

But the essential question is: How do we stop the attacks?

The only method of change the system offers is “vote.”

But the so-called “democratic” voting process is endlessly manipulated, short-circuited, withheld and bought outright to serve the purposes of Big Banking, Big Business and Big Guns. Electing candidates from either of the corporate parties is ultimately ineffective. Meanwhile, problems facing workers multiply.

Instead, working people have the ability to exercise actual power. They can bring a company, an institution — or the entire economic system — to a halt.

Workers can win real concessions the way the striking teachers and school workers have done all spring — walk out and refuse to work. The bigger the numbers and the longer the walkout, the more likely concessions can be wrung out of the system.

But note this: In Oklahoma, after the education workers went back to the schools and classrooms, the legislators simply reversed their vote and canceled some of the wins.

We need to win change that cannot be taken away with the next bought-and-paid-for legislative vote or the next racist, anti-woman or anti-LGBTQ campaign designed to split the solidarity of workers and oppressed peoples.

There is a difference between winning concessions and overturning oppression.

Let’s make this a long, hot summer for the bigots and the bourgeoisie. A summer when they hope longingly for the end — and instead see the foreshadowing of their own end, as everywhere masses of working and oppressed peoples build connections and lay a foundation for lasting social revolution in our time.