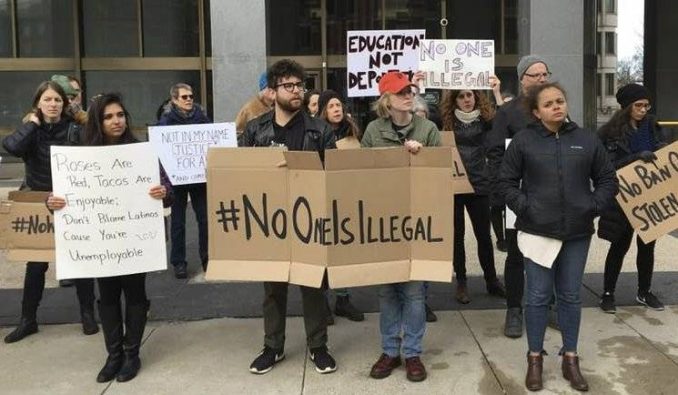 Temporary protected status (TPS) was enacted in the U.S. in 1990 when Congress established a procedure to provide deportation relief to immigrants unable to return safely to their home countries due to war, violence, the aftermath of natural disasters or other dangerous conditions. Some of the countries covered by TPS include Haiti, El Salvador, Honduras, Sudan, Syria and Yemen.

Many people with TPS status fled those conditions and have lived in the U.S. for 15 or more years. They have set down roots here, built families, own homes, have children with U.S. citizenship.  Over the years, their protected status has been renewed at regular intervals.

In January, Trump decided to cancel TPS completely, effective sometime in 2019, with protection for some countries ending sooner. Over 250,000 Salvadorans will be affected by this.  Many came to the U.S. after a devastating earthquake in 2001.

Workers World spoke on April 28 with two union organizers at Harvard University who are leaders in the Harvard TPS Coalition and who migrated from El Salvador.

The Harvard TPS Coalition is made up of members of UNITE HERE Local 26; SEIU 32BJ; the Harvard Union of Clerical and Technical Workers, AFSCME Local 3650; the Harvard Graduate Student Union, and faculty and students.

Workers World: How did you get involved in forming the TPS Coalition at Harvard? We have heard there is a UNITE HERE Local 26 initiative to organize TPS workers within the union in order to expand protection and demand permanent residence.

Marta: Being a woman and union activist have been a good experience for me. I was hired by my union for six weeks to do the TPS organizing work. I went to Northeastern University and Sky Chef [a kitchen which supplies food for the airplanes]. Sky Chef was the hardest. The workers don’t want to talk about TPS. They said: “Nothing is going to change. What do you think union is going to do for us!?”  So the first thing I say is, “You are the union. I am the union. So if we come together, we can make change, right?” I started with two people in Sky Chef and now we have 14 people who come and call me. Word spreads and they call me.

WW: What motivated you to get involved? I believe you were active in a strike at Harvard a year and a half ago that was a huge international workers’ victory, with big wins in health care, im/migrant rights and compensation for layoffs.

Marta: I started to become more motivated to do this work around TPS after the strike, because it was three, very powerful, very difficult weeks for me. What made us strong was a year’s worth of work, starting with talking to the workers one by one and convincing them, first, that we were going to strike and why, what we wanted and why we needed to be strong in order to take to the streets and win the strike. The last big event we had [a rally on Cambridge Commons and march to City Hall], that day I cried because people came from Los Angeles, Washington, Chicago, New York, Boston, all the unions were together. And they talked to us about the strength we had by uniting and the words I won’t forget. A leader in the union said: “I’m going to say the word: We’re going to kick Harvard’s ass!” We had a contract on Monday. So that made me realize that, OK, we’ll unite and we’re going to keep going, and we’re going to work.

WW: What about you, Doris?

Doris: For me, it was a little different. Being active in the union was a very difficult step to take. But the bullying I was suffering at my job, the discrimination I was experiencing at work, made me decide to do something. I knew I had a union I could count on. And I don’t think I’ll ever forget what a boss said to me once when I put in a complaint about what I was going through at work. He said: “Look, I’m the boss here. I do what I want, and neither you nor anyone else is going to tell me what I have to do.” All because I asked him to give the other employees some training about what I was going through. Because I’m a Muslim, so on every Friday at 1:30 [in the afternoon] I go to pray. I was wearing my veil and another worker started laughing at me. I think that it’s something that deserves respect, that we all deserve respect at work. That was a few years that I worked in the Law School, and it still hurts to talk about it. It got to a point where the bullying was so intense I had to see a psychiatrist. Because people don’t think about how they can hurt a human being, how they can hurt them. Especially in my case because I suffered sexual abuse when I was eight years old, and that trauma has been very hard for me to overcome. So I have problems with disassociation, and when I was bullied at work, sometimes I would lose myself and forget who and where I was. But then people bullied me for that, so I said, “No more.” I deserve respect, just like anyone deserves respect, and I’m not going to allow this.

That’s when I met a union organizer, Jennifer, who I’ll never forget. She got me involved with the union working on our contract. I lived the experience and the excitement of the Local 26 strike. When they would pass by where I was working, I would go out to yell with them as if their struggle were mine, because I felt that need to express what was happening at my work. After they won their strike, we started our negotiations. I remember the organizer was exhausted because they had left her alone, and she told me: “Tomorrow we need to get a group of people out because, if not, how are we going to pressure Harvard?” Because we were also fighting for medical insurance. And I said: “Wow, this is my first experience with the union, what can I do?” I went to bed at 8 at night and woke up an hour later and started calling all my coworkers. In the morning, we had a meeting and at 11 I went to my organizer and said: “You have the speakers, the signs to march?” And she said, “But nobody is gonna come.” And I said: “Trust me, people will come.”

And 200 workers came! 200 workers who marched, and that motivated me more and more. How this has helped me with the TPS coalition is that it gives me strength. Because without this experience, this TPS stuff would have left me alone at home crying. But because I had this experience, when I heard the news that Trump said there would be no more TPS after September 2019, I said: “Well, I have to do something.”

WW:  As you know, DACA (Deferred Action for Childhood Arrivals) has given 800,000 young immigrants, brought to the U.S. as children, the right to stay, study and work in the U.S. without threat of deportation. They have became known as “Dreamers.” In September 2017, Trump and the right wing ordered an end to DACA. Why do you link TPS, DACA and all undocumented workers in your literature, speeches, signs?  Why is this important?

Marta: I have always found that [those] three things — TPS, DACA, and the undocumented, who don’t have anything — we’re on the same level because having TPS hasn’t made us legal in this country, it’s temporary and so is DACA. And those [undocumented] who are still behind us, still in the shadows, they can’t speak. … We try always to say TPS, DACA and all the undocumented, so that our voice can be stronger and so that our co-workers will say: “OK, they’re not just fighting for one thing. They’re fighting for everyone, for there to be a just immigration reform.”

Doris: I think also that we are in a difficult moment and what matters the most is unity. We can’t win this battle if we’re only going with TPS. We need also the people with DACA and the people who don’t have any documents to be together with us, so that we can grow and take to the streets and fight. They’re also immigrant families just like us that have children born here. They have the right to watch their families grow up just like us. And the DACA kids … many of their parents are undocumented. So I think that it’s very important that we work on all three cases together so that we can all be in this country together. What we’re fighting for is that there should be no separated families.

WW: Trump announced on May 4 that 90,000 Hondurans will no longer be protected by TPS, put in place for that country after Hurricane Mitch struck in 1998. They have 18 months to leave or make other arrangements to stay. What do you think about this?

Doris: This is the worst, terrible. They face the same issues as we do. They face murders and violence back home. Their families are in limbo.  Hondurans come to the States [to work]; they are paid $1 a day, which is a lot of money for them. Honduras has the worst economy. This has to be so, if they are coming to the States to work for $1 day!

WW: What would Trump’s ending of TPS mean for you personally?

Doris: It would be a huge impact. It’s even already affecting my family deeply because I have an 11-year-old daughter who calls me every morning to make sure I got to work, and every afternoon asking if I made it back. Because she hasn’t understood that there isn’t any risk yet, but in her mind there already is. The effect on my family has been traumatizing, my daughter is being traumatized. She’s even been discriminated against at school. … So — not just me but also my children. This country doesn’t realize how it’s hurting these kids, who are U.S. citizens, its own citizens and it doesn’t even care.

WW: There’s a new WWP pamphlet, “Every Struggle is a Woman’s Struggle.” What do you think of that title?

Marta: If a woman is suffering, we share her same pain. If a woman is abused, we feel it. Because a woman’s work is like a double work. We are mothers, wives, workers, activists, and we’re reaching a level where we do the same work that men do. I work in a kitchen where I am the only woman. When I applied, the chef said to me, “I don’t know if you can work here. We carry heavy things.” I told him, “Look, you do your work, I’ll do mine.” Two years later, he apologized and said I do a better job than him. …

Doris: As women, we are mothers of men as well, so every problem in the world is our problem. We can’t just say: “Oh well, that’s a problem for men,” because we’re also mothers of men. So every problem that there is in the world, like the wars in Syria and Yemen, which I was hearing about on the radio, the problems here in this country, what’s happening in Palestine. All these problems are my problems because they affect me, in the sense of the psychological trauma we’re living through. …

We can work, we even work twice as hard because what our spouses do is work, come home and sleep, but we have to work and take care of the kids. We take them to the doctor. We go to work even if we were up all night. So I think that the woman has grown a lot in these times, and now we’re reaching a level that I would even say is above that of men.