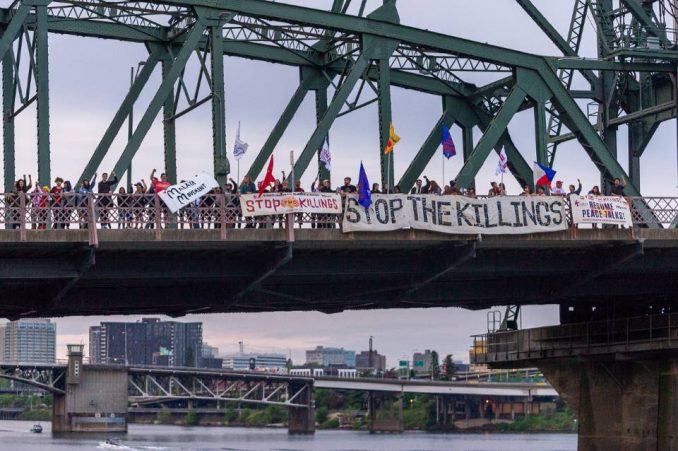 Portland, Ore. — A delegation of Philippine educators, activists and survivors of human rights violations is traveling through the U.S. with the “Stop the Killings” Caravan. Their goal is to educate people and develop broad support against the atrocities and deaths of over 14,000 Filipino people carried out by the U.S.-backed dictatorship of President Rodrigo Duterte.

The delegation is calling for social and economic equity, a return of farmers’ land, freedom from foreign intervention, and an end to all forms of U.S. military aid and support for fascism in the Philippines.

About 100 demonstrators joined Portland’s Stop the Killings Caravan rally at Waterfront Park on May 4. Speakers called for an end to the brutal atrocities and murder of Filipino people. They marched to the federal courthouse and across the Hawthorne Bridge, where they dropped “Stop the Killings” banners on both sides.

The caravan began in Washington, D.C., stopping in five major cities and completing the tour in the Bay Area from May 6 through May 9 and in Los Angeles on May 10-11.

For more information, contact the U.S. International Coalition for Human Rights in the Philippines & Malaya Movement at [email protected] Donations can be made at gofundme.com/stop-the-killings-caravan.