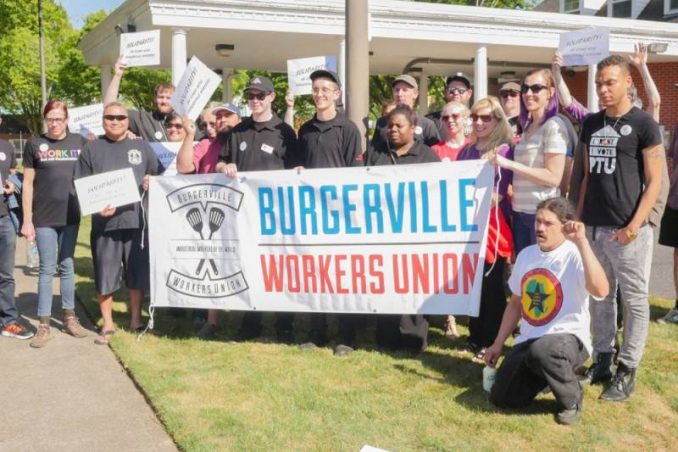 Workers at a Burgerville restaurant in Portland, Ore., won a momentous victory on April 23. With the National Labor Relations Board overseeing their election, they are now in the first federally recognized fast food union in U.S. history.

Burgerville is a regional chain owned by The Holland Inc. with over 1,500 workers in Oregon and southern Washington. (The Oregonian, April 25) Allied with the Industrial Workers of the World, the workers began their struggle in 2016 for better pay, health care and more. Despite the company doling out anti-union propaganda and retaliating against individual organizers, the Burgerville Workers Union was soon in action. But the company refused to negotiate without an NLRB election, even though six of the company’s 42 locations had publicly active unions and several in Portland held walkouts and three-day strikes in February. Then the NLRB agreed to the election, resulting in an 82 percent vote to unionize.

After the election, Burgerville’s senior vice president was forced to say the company would bargain in good faith. The week of April 16, workers at a second Burgerville location in Oregon filed for a federal election. Mark Medina, Burgerville worker and union organizer, told the Oregonian: “A lot of us are poor, hungry and even homeless. [This will be] the beginning of the end to poverty wages.”

This is a landmark victory for all fast food workers and shows the impact of the Fight for $15 campaign that erupted in 2012.

Since mid-March, the Association of Legal Aid Attorneys, United Auto Workers Local 2325, has been protesting Immigration and Customs Enforcement arrests in New York City courthouses. On March 15, it rallied a broad coalition of unions, immigrant rights advocates and community groups to demand justice and due process for im/migrant defendants and their communities. The week of April 9, ALAA and Queens Law Associates staged three walkouts from Queens, Manhattan and Bronx courthouses after two immigrants were seized in Queens on minor charges.

The Legal Aid Society and ALAA posted a statement May 7 on alaa.org applauding Cuomo’s action, stating: “ICE’s presence in our courts undermines our ability to represent our clients and safeguard their Constitutional rights. Immigrant defendants and witnesses are terrified to appear in court, knowing that ICE is indiscriminately targeting anyone who is not a U.S. citizen [and taking actions to prevent] our clients’ ability to seek relief from removal in immigration court.” The statement also appealed to New York Court of Appeals Chief Judge Janet DiFiore to join chief justices in California, Connecticut, Washington, New Jersey, Oregon and Washington who have called for ICE to stay out of courthouses and stop undermining the struggle for justice.

When Arizona teachers and other education workers began a statewide walkout April 26, they weren’t alone. Not only were they joined at the Capitol in Phoenix by students, parents and community members, but labor unions came to show solidarity. Though only 4 percent of workers in the “right-to-work” (for less) state were members of a union in 2017 — down from a peak of 8.8 percent in 2008 — those in unions jumped at the opportunity to show support.

As Communications Workers member Paul Castañeda told radio station KJZZ, “[T]his is a perfect opportunity to really teach the millennials, those in high school, what labor is about. It’s coming out and supporting each other.” Jordan Harb, a Mountain View High School junior, addressed Gov. Doug Ducey at the April 26 rally: “The children who you have ignored through marches, meetings and eight-hour sit-ins stand with teachers.”

Fred Yamashita, chair of the Pima Area Labor Federation in Tucson, noted that “standing with teachers is a way for unions to educate the public on the merits of organized labor” and “remind people of labor’s role in society.” Yamashita pointed out that some unions are also bucking anti-union pressure in the state. Not only does Local 99 of the Food and Commercial Workers have its highest membership — more than 23,000 — but apprenticeships in the building trades are growing. (kjzz.org, May 1)