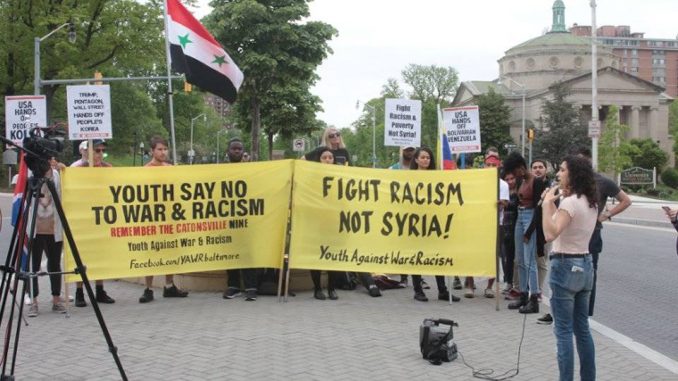 Over thirty young students and workers gathered on May 5 at the entrance to Johns Hopkins University in a demonstration to commemorate the Catonsville Nine, who are part of Baltimore’s anti-war history.

Fifty years ago, nine Catholic activists stole nearly four hundred draft cards from the local selective service board in Catonsville, Md., and burned them with homemade napalm. Their action saved four hundred people from being shipped off to fight an illegal war in Vietnam.

The May 5 action marked the formation of Youth Against War and Racism (YAWR), whose members dedicate themselves to taking up the anti-imperialist, anti-war mantle. Members of YAWR are affiliated with groups like the People’s Power Assembly, Bayan USA, the International Coalition for Human Rights in the Philippines (US), Hopkins Tzedek, Hopkins Students for a Democratic Society and Workers World Party.

YAWR demonstrators marched over two miles from the university campus to the Maryland State Armory, where the National Guard secured their weapons during the 2015 Baltimore uprisings against the police killing of Freddie Gray. At the armory, YAWR members tore up and burned military recruitment materials and a U.S. flag — symbols of racism and imperialism — in the tradition of the Catonsville Nine.

Weapons corporations and federal security agencies based in Maryland and D.C. are huge funders of weapons research programs in Maryland colleges and universities. It is no coincidence that their CEOs and top brass sit on the boards of directors of many university foundations.

Now, more than ever, YAWR is seeking to raise anti-war consciousness, combat imperialist propaganda, and be in solidarity with the nations and people who oppose the U.S. war machine.