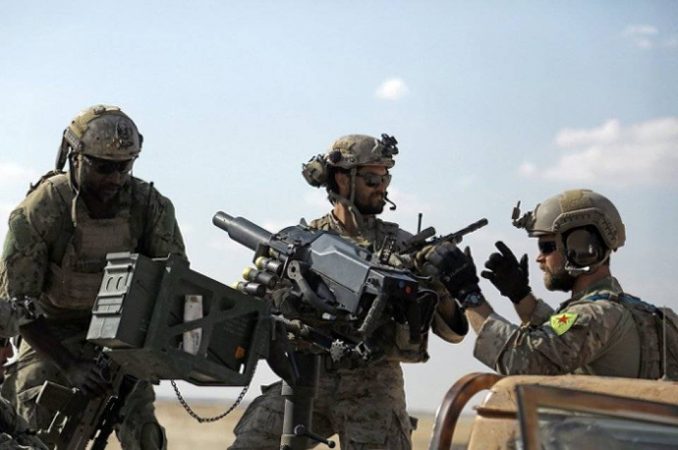 U.S. special operations forces in the northern Syrian province of Raqa on May 25, 2016.

The New York Times published an explosive report May 3 that the Pentagon has stationed a unit of Green Berets in Saudi Arabia on the Yemen border. Their mission is to “locate and destroy caches of ballistic missiles and launch sites that Houthi rebels in Yemen are using to attack Riyadh and other Saudi cities.”

Since the missile launchers are small and mobile, it is likely that the U.S. Special Forces unit will enter Yemen to battle Houthi units if they have not already done so, despite Pentagon denials. A May 1 report in IHS Jane’s Defence Weekly states: “The United States Transportation Command issued a request for information on 30 April for third parties that are capable of undertaking aircraft- and helicopter-based personnel recovery, casualty evacuation, and medical evacuation duties within the Central Command area of responsibility in general, and within Yemen in particular.”

Why would the Pentagon contract with corporations to evacuate troops from Yemen if it did not plan to send forces into that embattled country?

The Houthis are a Shiite Muslim grouping in Yemen that took over the government center in the city of Sanaa in 2014. They ousted pro-U.S. President Abed Rabbo Mansour Hadi, who fled to Saudi Arabia.

This new escalation, states the Times report, appears “to contradict Pentagon statements that American military assistance to the Saudi-led campaign in Yemen is limited to aircraft refueling, logistics and general intelligence sharing.” Once again the Pentagon and the White House have launched a secret illegal war without congressional approval.

Saudi Arabia began a devastating air war against the people of Yemen in 2015 after the U.S. gave its support, according to the Times: “Officials said American support for the Saudi-led coalition against Houthi rebels, a campaign that includes the United Arab Emirates, Jordan and Egypt, was initially outlined in a 2015 document known as the Rice memo, named after Susan E. Rice, who was then Mr. Obama’s national security adviser.”

Lasting more than three years, that bombing campaign has killed at least 10,000 people and injured more than 50,000. The Saudi regime, with its Gulf State allies, has prevented vital food and medical supplies from reaching Yemen’s 28 million people by blockading or capturing that country’s ports.

Reuters corporate news agency opines: “Winning and keeping control of Yemen’s ports in the Red Sea, no matter how small, is of paramount importance to the UAE, a key partner in the Saudi-led coalition that has overseen the effort to wrest the coast from the Iran-aligned Houthis as part of a strategy to box them in around the capital, Sana.

“Dotted along one of the most important trade routes for oil tankers heading from the Middle East to Europe, the ports — also vital entry points for Yemen’s food imports and aid — are too strategic to lose.” (reuters.com, April 9)

In December 2017 the Saudi regime promised to ease the blockade of Yemen, but that has proved to be a lie. “Yemen’s rebel-held port of Hodeidah, a lifeline for the war-ravaged country dependent on food imports, remains ‘a wasteland’ three months after a Saudi-led coalition alleged to have lifted its long-running blockade.” (alarby.co.uk, March 25)

This war has caused unbelievable suffering for the people of Yemen, one of the poorest countries on the planet. According to the U.N. Office for the Coordination of Humanitarian Affairs, there are 17.8 million food-insecure people in Yemen and around 7 million people on the brink of famine.

OCHA’s Humanitarian Needs Overview found that an average of 65 people have been killed or injured daily since the escalation of the conflict, with children making up 13 percent of the Yemeni casualties. According to the agency, 16 million Yemenis lack access to “safe water and sanitation” resulting in an estimated 1 million cases of cholera. There are 2 million internally displaced people. (axios.com, Jan. 23)

Yemen’s Houthi President Salah al Samad was assassinated April 21 by a Saudi air strike. Since the U.S. refuses to recognize the Houthi government, corporate media gave this little attention, even though Pentagon complicity with this attack would violate U.S. and international law.

Stationing Green Berets at the Saudi border is the latest in an increase in secret deployments of U.S. Special Forces. These are now stationed in 149 countries, 75 percent of the world’s nations. “General Raymond Thomas, the chief of U.S. Special Operations Command, offered some clues about the planetwide reach of America’s most elite troops. ‘We operate and fight in every corner of the world,’ he boasted. ‘Rather than a mere “break-glass-in-case-of-war” force, we are now proactively engaged across the “battle space” of the Geographic Combatant Commands providing key integrating and enabling capabilities to support their campaigns and operations.’” (truthdig.com, Dec. 18, 2017)

In May 2017, while visiting Saudi Arabia, Trump signed a whopping $110 billion weapons deal with the Saudi regime. This March, the Pentagon added a $670 million sale in anti-tank missiles and spare parts for aircraft and helicopters. (presstv.com, May 3)

When analyzing this new escalation by U.S. imperialism, it should be remembered that the purpose stated by al-Qaida for its 9/11 attacks was to remove U.S. troops stationed in Saudi Arabia.

U.S. out of the Middle East!