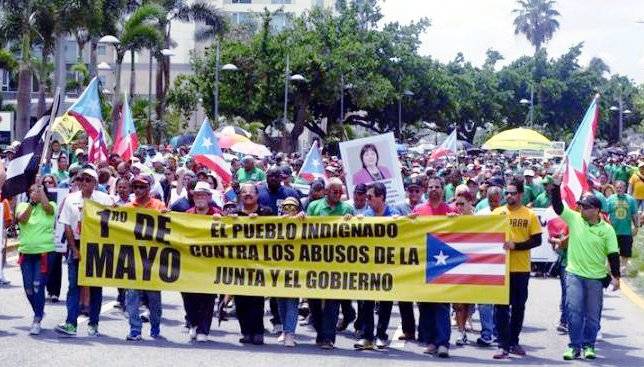 The Teachers’ Federation of Puerto Rico (FMPR) continued its militant opposition to the government closing of public schools (left) during May Day in San Juan. Contingents from all regions and sectors of the people united against the assaults of U.S.-imposed austerity.

On May Day, the extreme political devastation in the Puerto Rican archipelago was clearly shown. The lines of combat were drawn. The interests that the administration of Gov. Ricardo Roselló — and those of his predecessors from the Popular and the New Progressive parties — have sought to disguise became evident. The face of the colony — which is at the mercy of the empire’s interests — was crudely exposed.

In the early morning on May 1, a typical workday in Puerto Rico, the streets of San Juan were deserted. Plaza Las Americas, the most important commercial center of the metropolitan area, was closed down. So were the businesses and banks in the Golden Mile, the financial center. The deserted streets verified that the national strike was a resounding success.

Then thousands of Puerto Ricans converged throughout the morning on the Golden Mile from feeder marches in response to the call issued weeks before by United People against Sale and Privatization of Public Services.

People came from Culebra and Vieques. Students came and mothers, fathers, children, seniors — entire families — as well as teachers and members of labor unions, women’s groups and environmental communities.  All sectors of the Puerto Rican population were united.

In the island’s southern and western areas, demonstrations were organized for those who could not travel to the metropolitan area.

Those who did not attend the demonstrations still followed the guidelines of the convening organizations: Do not go to work or to school; do not buy anything; do not make any bank transactions. In short, try to paralyze the economy for a day.

All of the marches were spirited as well as orderly, with militant chants and music. However, some eyewitnesses reported — and multiple videos played on social media showed — that police tried to change agreed-upon routes and block free passage of the demonstrators. The police were hostile and insulted protesters from the beginning to the end of the action. In fact, days before, the capitalist press had tried to instill fear and intimidation among the population to prevent people from participating in the marches.

For weeks the police had complained that they had not been paid since Hurricane Maria and the authorities had abandoned them. They appealed to the people for solidarity and in large numbers called out sick with what’s known as the “blue flu.” While neglecting the wave of petty crimes, due to desperate conditions that plague the island, the police attended May Day in large numbers to fulfill their true role as agents of the state and protectors of the capitalists’ interests. More than 1,000 heavily armed agents were deployed. Masked riot squads were present.

At the march’s end, police provocatively and unjustifiably prevented the contingent of the Promises Are Over Collective, composed mostly of youth, from passing the building that houses the Fiscal Control Board’s office, on their way to the main stage. Some protesters responded by throwing marbles and bottles.

When Scot Barbés, the contingent’s leader, saw that the police were in attack formation, he began to negotiate with them. Officers promised to let the young people pass if they stopped throwing objects. The protesters complied — but an hour later the police lashed out furiously against the crowd, throwing tear gas and hitting people with their batons.

Multiple photos and videos show elderly and young women with bloody heads, girls and boys who had been sprayed with pepper gas, and hundreds of police chasing youth to a residential area where they illegally invaded a house to arrest two students.

Several civil rights organizations are currently investigating the  unconstitutional excessive presence of police and their actions — blocking routes, using chemical agents affecting children and the elderly, assaulting innocent people with rubber bullets, throwing pepper gas in residential areas, and arresting at least a dozen people without disclosing the location of where they were taken.

In the face of accusations of police violence, U.S. District Judge Gustavo Gelpí appointed a retired special agent to investigate the day’s events. Significantly, the Puerto Rican police force has been accused of recent abuses, and is currently undergoing a reform process conducted by the same judge.

Police entrapment has been part of the political history of Puerto Rico’s state agencies against the independence movement. It evokes the massacre of Cerro Maravilla in 1978, when an undercover officer, under false premises, took two young independentistas to that site. In an ambush, police shot them.

Background to May Day events

The unsustainable crisis of a bankrupt colony that decadent capitalism seeks  to restructure to satisfy its interests has provoked a resistance that is constantly showing signs of life — even though it has not yet fully cohered.  U.S. and local powers in Puerto Rico have prepared their repressive forces to stifle that resistance.

That is the reason why former FBI agent Héctor Pesquera was hired — with a yearly salary of $250,000 — as the leader of the new “National Security” umbrella in Puerto Rico.  It includes police, fire, emergency and other agencies. Pesquera, who was totally ineffective in solving the civilian security crisis after the hurricane, has orchestrated these repressive operations against the people.

The fiscal plans presented on April 19 by the Fiscal Control Board amounted to a declaration of war against the Puerto Rican people.

Wars have sides. The island’s people cannot be expected to silently and passively comply with the draconian measures imposed by the U.S. Congress under the PROMESA law and its Fiscal Control Board, which represents U.S. millionaires.

FCB President José Carrion warned: “The new proposed Fiscal Plans outline the agenda for the transformative change that Puerto Rico needs.” (Noticel, April 19) However, Sergio Marxuach, director of Public Policy at the Center for a New Economy, says, “The Plan seems to underestimate the negative impact of the fiscal reform and overestimate the positive impact of the structural reforms.” (“The social cost of the Fiscal Plan,” 80grados.net)

To carry out these reforms, the FCB presented fiscal plans for the government and agencies, including the Electric Power Authority, the Aqueduct and Sewer Authority, and the University of Puerto Rico. The board proposed a 5-year plan with an estimated increase of $2.3 billion in collections and spending cuts of $9.9 billion.

Among the proposed measures are privatization of government agencies;

closing schools and reducing payroll expenses in education; decreasing the subsidy to the University of Puerto Rico by more than $200 million; consolidating offices and eliminating police headquarters; closing prisons and sending inmates to jails in the U.S.; and cutting economic transfers to municipalities by more than $175 million. There are many other measures, in addition to “consolidating” 114 agencies into 22.

Cruelly, the board would impose work requirements for poor people, including students, seniors and those with disabilities, to obtain Nutrition Assistance Program benefits. For government workers, the FCB would eliminate Christmas bonuses and payments for unjustified firings; reduce paid days for vacation or illness; and cut retirees’ pensions by at least 10 percent. Above all, the board seeks to repeal labor protection laws.

The effects would be disastrous for the future of the Puerto Rican nation.  Marxuach’s article explains: “The six members of the Board that approved the Plan believe, despite all the evidence to the contrary, that Puerto Rico will become a neoliberal paradise. This is unlikely. It is more likely that we end up with an infernal dystopia: with more social polarization, unemployment, extreme poverty, criminality, child abuse, gender violence, abuse of controlled substances and suicides, and less schooling, life expectancy and social mobility.”

Carlos Alá Santiago Rivera, professor at the Graduate School of Public Administration and former director of the Institute of Labor Relations of the University of Puerto Rico, analyzed aspects of the FCB plan in a May 2 article, “Institutional Violence as a Governmental Proposal.” (claridadpuertorico.com)

Referring to the proposed labor reform that terminates collective bargaining, he wrote: “The systematic abandonment by the government of Puerto Rico of the traditional methods of collective conflict resolution, among them that of collective bargaining, is a call for the renewal of violence. … If disputes between employers and workers can no longer be negotiated, then what remains is the confrontation of the parties in a conflict of difficult solution, violent, chaotic and endless.”

Additionally, Santiago Rivera stated: “Collective bargaining was understood as the appropriate means to peacefully resolve the causes that caused the war between the parts. In the absence of this instrument or its suspension and degradation today to a mere referent to the past: How exactly do we want to solve the labor and social problems that will arise?”