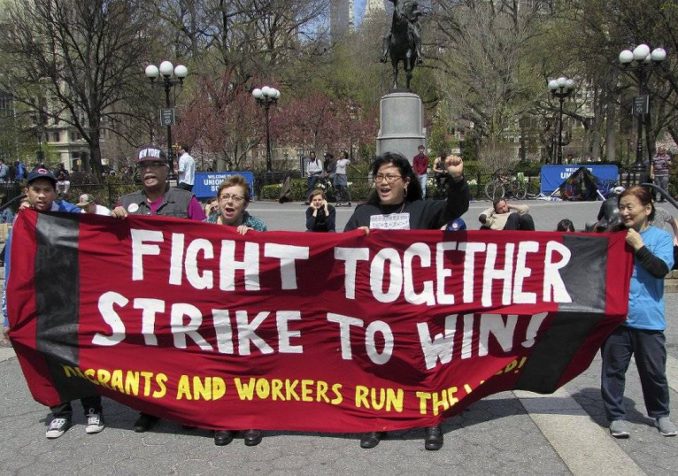 The migrant sector of the global working class in 2006 revived May Day in the U.S., staying away from their jobs and thereby making a genuine contribution to the class struggle in this country.

The situation of migrants and refugees around the world has become a global humanitarian crisis, one that revolutionary and communist organizations must struggle to deal with. Allies of migrant workers often refer to “a war on immigrants.” This war is harmful and dangerous not just to migrants, but to all workers, here and around the world.

It was not started by Donald Trump or Attorney General Jeff Sessions, but they are absolutely escalating it. In fact, at a recent Trump rally he asked, “Any Hispanics in the room?” The large crowd of bigots booed a thunderous response.

Undocumented workers are not the only ones who have become victims of the anti-immigrant terror sweeping the country. U.S. citizens are also being rounded up and held for long periods of time by Immigration and Customs Enforcement, despite providing proof of citizenship.

Wrongful arrests are being made “based on incomplete government records, bad data and lax investigations,” according to information obtained through “lawsuits, internal ICE documents and interviews.” (Los Angeles Times, April 27) A U.S. citizen, originally from Mexico but living in New York, was held for three years, despite his son repeatedly showing officials his father’s passport.

This wave of terror affecting mostly people of color began under the Democratic administration of Barack Obama in 2012 and 2013. His aggressive policies forever earned him the title “Deporter in Chief.” But the abuses continue today, and the anti-immigrant hype has intensified, accompanied by white supremacist demagogy.

One detainee, a 10-year-old boy, was held in a detention center all alone in Texas for two months. His family lived in San Francisco. Another heartbreaking story is that of Davino Watson, a U.S. citizen of Jamaican background living in New York, who was arrested by ICE in 2008 and held for three whole years.

Watson told the L.A. Times, “You feel hopeless. It was hard to understand. I spent many nights crying.” Persevering and working on his case from prison, he finally won his freedom. To add salt to the wound, however, Watson was released from a detention center in rural Alabama, where he knew no one. He was given no money, was sent out in prison clothes and was forced to go up to strangers at a gas station to borrow someone’s phone. Watson was lucky not to have run into some Klan members or racist police, or he mght never have made it home.

The Trump administration has kept the promises he made to his racist nativist base. While all his shenanigans dominate the news cycle, brutal changes in immigration policy are being made behind the scenes.

It is now harder to get an H-IB visa to work in this country. This especially affects spouses, mainly wives, from India, aggravating economic hardship for their families.

A travel ban targets Muslim communities. When first issued, it led to a righteous outcry of support for migrants and refugees. But this ban is still making its way through the courts, and on April 25 the Supreme Court implied at a hearing on the case that a third attempt would succeed if the administration could prove its grounds.

The Trump administration has opposed DACA (Deferred Action for Child Arrivals), and to this date the legislation remains in limbo, meaning that about 800,000 Dreamers are anxiously living in uncertainty.

Early this year, the administration changed the asylum process, leading to more denials and more deportations. The New York City Anti-Violence Project says there are likely thousands of LGBTQ asylum seekers in danger of violence if they returned home, who are stuck in a backlog of applicants that has grown to unmanageable levels. (Daily Beast, April 27)

Despite these restrictions, the Washington Office on Latin America points out: “There has indeed been a sharp rise in asylum seekers from Central America’s Northern Triangle region (Honduras, Guatemala and El Salvador).” More individuals from this region sought asylum from 2013 to 2015 than in the previous 15 years combined, but not because of “loopholes.” Washington and Wall Street’s foreign and economic policies as well as the lucrative drug industry have forced millions to migrate. Hondurans, for example, are fleeing their country because of a fraudulent election supported by Washington that installed a repressive government.

The State Department reported four years ago that “trafficking organizations earn between $19 billion and $29 billion every year from selling marijuana, cocaine, heroin and methamphetamines” in U.S. cities. (NPR, March 20, 2014) That money must be laundered somewhere.

Wall Street banks profit the most. This lucrative industry fills their coffers while drug cartels destabilize the countries of Central America, causing so many to leave their homelands. These migrants have earned asylum a hundred times over.

When children arrive in the U.S. after a terrifying journey, they are terrorized even further. “Federal Agencies Lost Track of Nearly 1,500 Migrant Children Placed With Sponsors” read a headline in the April 26 New York Times. Imagine a mother in Guatemala who has not heard from her child learning that. The Times writes: “The children were taken into government care after they showed up alone at the Southwest border. Most of the children are from Honduras, El Salvador and Guatemala — and were fleeing drug cartels, gang violence and domestic abuse, government data show.”

This comes after a scandal two years ago when this same agency disclosed that eight children had been “inadvertently” placed with human traffickers, who forced them to work on an egg farm in Ohio. The news that 1,500 children are lost should provoke a massive outcry. It has not.

Wherever migrants or refugees go, whether it is at home, school, work or just walking in the street, ICE or the police can descend on them and lock them up. Workers going to court for routine checkups on their immigration status are detained and often deported, despite their status being on hold in the system.

Amtrak and especially Greyhound have seen more Border Patrol agents coming on board and asking everyone for identification. The American Civil Liberties Union is arguing that “Greyhound has the right and the responsibility to its passengers to demand a warrant” before Border Patrol get on buses.

Trump has vilified the “sanctuary city” concept to continue his racist narrative that migrants are all “killers and thieves.” The term sanctuary city refers to areas — cities, municipal jurisdictions, counties or states — that have agreed to limit their cooperation with ICE or other federal efforts to enforce reactionary immigration laws.

One negative result is that ICE is now often going to people’s homes rather than public places.

Nevertheless, according to a Pew ­Research Center study, sanctuary cities have fewer deportations than places where there is more collaboration with ICE. In New Mexico, the efforts of city officials and communities alike have led to fewer deportations and a more welcoming climate to migrants. (Yes! Magazine, April 11)

But in Texas the state legislature passed a law, which must be fought, banning sanctuary cities.

Trump may make fun of Attorney General Jeff Sessions, but he is nonetheless eagerly carrying out the president’s anti-immigrant policies. It was Sessions who announced Trump’s anti-DACA program, and he is now suing the state of California about its sanctuary laws.

Sessions traveled to Las Cruces, N.M., in early April to meet with sheriffs from 31 counties near the border with Mexico. A well-documented racist and bigot, Sessions was against the Voting Rights Law (1965), speaks against LGBTQ rights and for stop-and-frisk, and once said that all Dominicans had “no provable skills” to allow them into the U.S. He is helping to carry out the dangerous militarization of the U.S./Mexico border.

Sessions stated after the meeting: “I have ordered each U.S. attorney’s office along the southwest border to have a zero-tolerance policy toward illegal entry. Our goal is to prosecute every case that is brought to us.” His remarks and a Trump tweet were directed specifically against the heroic caravan that has made its way from Central America through Mexico, arriving near the end of April in the Tijuana-San Diego area.

Which way forward to defend migrants and refugees?

What will it take for the labor movement, the women’s movement, and all progressive and working-class movements of every age, ability, gender and race to unite and rise up in a militant and revolutionary struggle to stop the war on migrants and refugees?

This modern war on migrants, which began in 2005, is rapidly creeping into a fascist state of terror. Children are literally being torn out of the arms of their parents and jailed, placed in strangers’ homes, forced to work in factories or lost altogether. Tens of thousands die in the desert, much like those brave souls who have died in the Mediterranean.

No place is safe, neither the homeland you want to return to nor the nation that defiled your homeland.

This growth of police-state tactics affects not only migrants, refugees and the undocumented, but all workers. It is meant to divide and conquer by whipping up whites against all people of color.

Workers and oppressed must not by distracted by Trump’s shenanigans. Experienced, ruthless warmongers and white supremacists like Jeff Sessions are running Washington and carrying out terrorist policies.

In this wave of terror lies the sea of ­resistance.