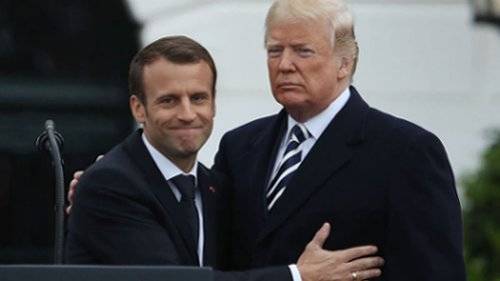 Paris, France, April 29 — As if the calamity that befell them on Nov. 8, 2016, with the election of Donald Trump as president was not enough, the people of the U.S. had to also experience the state visit of the miniature Napoleon: Macron I. “And of his wife Brigitte,” as the tabloid press likes to chirp.

These media do not say whether — between the goat-cheesecake and the creme fraiche ice cream of the dinner that First Lady Melania Trump dreamed up — the two presidents were able to discuss the failures of the French armed forces during the recent imperialist joint assault on Syria.

An anecdote: On April 14, malfunctions prevented seven of the 16 French “punishing” missiles from being fired, as initially planned. Only one of the three frigates of the Navy managed to carry out its mission — the other two encountered computer bugs. At 2.8 million euros [$3.4 million] each for the ultra sophisticated missile (also deployed on French nuclear submarines), that makes for an expensive failure!

One of the five air force fighters deployed for this operation only managed to launch one missile out of two — the other had to be dropped in the sea. That dumped another 850,000 euros in the water!

It was not such a great commercial showcase for arms made in France!  We don’t know how much the U.S. bosses shown shaking hands with the dynamic leader of the French start-up, Emmanuel Macron, could have been impressed.

Macron is not one to hold a grudge: in front of the photographers, he played the White House gardener and planted a tree in the backyard of the U.S. president who uprooted the Paris climate agreements on June 1, 2017. Was that to “make our planet great again”?

The French corporate media like to claim that Macron is trying to influence Trump’s positions. It seems quite the opposite: while he was visiting the monuments of Washington, D.C., Macron had the French National Assembly adopt the “Asylum and Immigration” law. This law considerably restricted the fundamental rights of foreigners in France.

He made a commitment to his U.S. counterpart to increase military spending and France’s participation in NATO. The French president — who compared himself to Jupiter after his election last year — is not just whispering compliments into Trump’s ear: he has become the little pet of the USA. Some of us here call Macron “Micron.”

And meanwhile, in France … The same day the Macrons arrived across the Atlantic, the railroad strike at the SNCF railway company continued and coincided with that at Air France. The publication of a provocative report on the “reform” (read: the breakdown) of rail transport in mid-February, followed by the government’s announcement of its willingness to put it into practice, had immediately provoked an outcry from railway workers’ unions.

What is being called into question — despite the false denials by the minister of transport — is the preservation of the SNCF’s truly public character and the status of its staff. To satisfy the EU government in Brussels, Macron wants to open up the railroad sector to competition. But where private competition will be dominant (obviously on the most profitable sections of the network), railway workers transferred to the private sector will see their status downgraded and their pay reduced according to the wishes of the new management.

In addition, many closures of “unprofitable” lines, especially in rural areas, are expected. This will bring further hardships to the rural population, who depend on these lines for local transit. And it is a move to force people off the land, so agribusiness can consolidate further.

The government’s extortion is perverse; its weapon is the assumption of SNCF’s debt by the government administration. Problem: This debt is not due to the so-called privileged status of railway workers (because working at night or on Christmas or New Year days to earn 1,500 euros a month as a switch operator or maintenance worker would now be a privilege!).

The debt comes, on the one hand, from the priority given to high speed trains. On the other hand, it comes from the forced orders that the state imposed on the SNCF to save the Alstom shipwreck.

Alstom rail transport company was one of the crown jewels of French industry. Macron himself, when he was minister of Economy and Industry in President Hollande’s administration, left Alstom to be butchered, under the patronage of the Rothschild bank — for which Macron was employed as an investment banker some months before. Part was sold (the energy branch) to General Electric! And will another part, the transport branch, soon be sold to the German firm Siemens?

This is the organized dismantling of French formerly nationalized industry, added to the scrapping of public services and the removal of job protection for workers called “flexibilization of employment”! That’s why the railway workers are on strike. Until June, or longer if necessary. And why we support them.

Herrera is a Marxist economist, a researcher at the Centre National Recherche Scientifique, who works at the Centre d’Économie de la Sorbonne, Paris. WW staff translated.