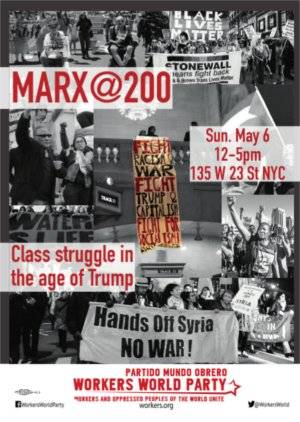 In recent years, we’ve witnessed a sharp increase in racist attacks against migrants and the working class, especially since the election of Donald Trump. We’ve also seen resistance by migrants, who have taken a lead role in organizing May Day demonstrations honoring the international working-class struggle.

After this year’s May Day, join Workers World Party for an afternoon of panel discussions and celebration, Marx @ 200: Class Struggle in the Age of Trump. Two hundred years since the birth of political theorist Karl Marx, the revolutionary ideas he developed have informed revolutionaries and struggles all over the globe — from Russia to China, Cuba, Korea, Vietnam, Haiti, Palestine, the Philippines, Burkina Faso and numerous places in between. This lively discussion will continue building upon the international working-class solidarity of May Day.

While the character of the working class today is changing, the revolutionary ideas of Marx remain just as relevant in the struggle against capitalism. Today, a new generation of revolutionaries is grappling with Marx’s legacy. What is the working-class struggle today, in the age of globalized capitalist exploitation and Trumpian white-supremacist onslaught, police murders and Immigration and Customs Enforcement roundups?

On Marx’s 200th birthday, Workers World Party will begin a much-needed discussion in this new, growing movement about who the working class is today. Capitalism has gone through a rapid and massive restructuring over the past four decades, leveling down wages and attacking workers’ rights and livelihoods on an unprecedented scale. At the same time, the world working class has grown, and opportunities to build solidarity on a global scale have never been greater.

Working-class struggles are increasingly led by Black, Brown and Indigenous people, migrants and refugees, women, LGBTQ people, the disabled and youth. Are their struggles a distraction from the workers’ struggle, as some claim, or do they spring from the same root as the Marxist-Leninist analysis of national liberation and special oppressions?

The program will feature a diverse group of youth and veteran activists and organizers sharing their perspectives. WWP First Secretary Larry Holmes will open with a talk on “Marx’s Revolutionary View of the Working Class: Unity of the Workers and Oppressed.”

Comrade Julie Varughese, who is helping organize the event, shares why Marx is relevant to today’s working-class struggle and the liberation of oppressed identities and nationalities: “His theory is still relevant today because it is a scientific analysis of human history, which has been dominated by class struggle. We are now seeing imperialist wars being waged that Marx predicted in the 19th century. He came to that conclusion through scientific means.

“The ‘working class’ as some people think of it — white males who work with their hands — is not today’s working class. As revolutionaries who center on oppressed peoples, we include sex workers, political prisoners, people with disabilities, migrants, racialized others, Indigenous people and more in the working class. We will not see a revolutionary overthrow of the class system until we work in solidarity with our most oppressed workers,” Varughese concluded.

Join Workers World Party at 135 W. 23rd St. in New York City, 12 p.m. to 5 p.m., on Sunday, May 6. If you can’t join us in person, tune in to our livestream on the WWP Facebook page: facebook.com/WorkersWorldParty.

We will celebrate the great history of working-class struggle as well as explore how Marx’s revolutionary ideas guide our present and future struggles against capitalist exploitation. Hope to see you there!