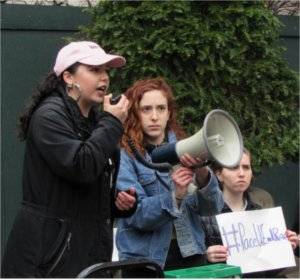 New York — On a cold, rainy day here, more than 100 students, many of them women of color, walked out of their classes at Pace University April 19 to rally against ongoing sexual violence on that campus. The speakout included survivors of sexual violence who refused to be silenced, not only by their abusers but also by an administration headed by Dean of Student Affairs Marijo Russell O’Grady. Students accuse O’Grady of being more concerned with protecting the school’s reputation than with protecting its students.

PaceUEndRape student activist Ariella Riapos put out the call for the “Women & Femmes Walkout” on Facebook, for all women-identified and nonbinary/queer students to protest the rape culture on the Pace campus.

Riapos, a Latinx senior, stated on her Facebook page: “We won’t stand for this censorship or repression. We gave a clear and concise list of demands, and as told to us by the Assistant Dean of [Students] in Pleasantville, N.Y., last night, the university has yet to even set a date for a meeting to begin discussing our proposed policies. This is UNACCEPTABLE. We will NOT be silenced.

“We as women (of color), femmes, nonbinary, queer and trans people experience some of the highest rates of abuse and sexual violence, and we will hold our university accountable to recieve the protection we DESERVE!” Riapos continued. “Tomorrow we walk out to DEMAND a safe college experience!” (April 18) Riapos had been sexually assaulted and stalked by her ex-partner, another Pace student, since she was a freshman, causing her to suffer depression and emotional anxiety.

Among the 10 demands raised by the students are:

What is happening at Pace is not an isolated development, but reflects the systemic sexual violence targeting women, including trans women, under a patriarchal, capitalist society.