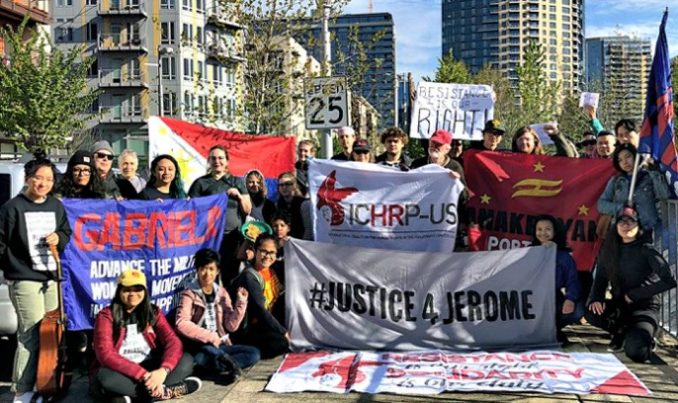 Protesters picketed the Portland, Ore., ICE office on April 20. Passing traffic supported them with honks, thumps up and raised fists. The demonstration was called by ICHIRP, Gabriela and Anakbayan and supported by Workers World Party.

Jerome Aba, a 25-year-old peace activist from Mindanao, the Philippines, was detained Apriil 17 for 28 hours in isolation at the San Francisco International Airport by U.S. Customs and Border Protection. Despite showing a valid visa, Aba suffered physical and psychological torture and was denied the right to a lawyer before being sent back to the Philippines.

“The whole time we were outside the CBP office, the CBP implemented torture tactics used by the CIA in places like Guantánamo Bay, not something we expect to happen at an airport on U.S. soil, right here in the SF Bay Area,” said Terry Valen, president of the National Alliance for Filipino Concerns. (facebook.com/ichrp.pnw)

Aba came to the U.S. to participate in the “Stop the Killings Speaking Tour: The People’s Caravan for Peace and Justice in the Philippines.” He is the national chairperson of Suara Bangsamoro and co-chair of Sandugo Movement for Moro and Indigenous Peoples for Self Determination.

The caravan will travel to six major cities from April 20 through May 11. It will expose the human rights violations in the Philippines through testimonies from Filipino people who have witnessed grave abuses by the U.S.-backed Rodrigo Duterte regime.

According to Valen, “The CBP lied in an apparent cover-up of their torture of Jerome. The reason for his detainment was very political, not an ‘unspecified problem’ or ‘very common glitch’ with his visa. They knew about his advocacy for Indigenous and Moro people and accused him of being a terrorist.

“The only food they gave him had pork, in blatant disrespect to his Muslim religion, and they restricted water for him to drink. We are outraged and will continue to stage protests calling for Justice for Jerome!”

Demonstrations to protest Aba’s treatment and demand his return took place in Washington, D.C.; New York City; Portland, Ore.; and Chicago, and will continue in a number of cities.