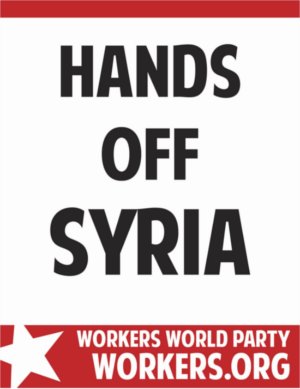 The U.S. president has led a Gang of Three into an aggressive assault on Syria. The attack by the Pentagon, Britain and France violated international law. In Donald Trump’s case, it also violated the U.S. Constitution and flouted the War Powers Act.

For a few days starting April 11, anyone who was paying attention was worried not only that many Syrians would die, but that the assault might unleash a military confrontation between the world’s two major nuclear powers, the U.S. and Russia.

The crisis began after charges were made that the Syrian army used chemical weapons in Douma, a suburb of the capital. Syrian troops at the time were on the eve of liberating Douma from occupation by reactionary forces. Aside from claims made by enemies of the Damascus government, no evidence was presented of the alleged attack.

Both the Syrian and Russian governments denied any use of chemical weapons. Others pointed out that it was not in the interest of Damascus to risk using such weapons when the government was on the verge of another big victory. The missile attack also occurred right before a delegation from the Organization for the Prohibition of Chemical Weapons was due to arrive to inspect the area.

On the morning of April 11, Trump began to tweet threats of a strike against Syria. After a back and forth, one read: “Russia vows to shoot down any and all missiles fired at Syria. Get ready Russia, because they will be coming, nice and new and ‘smart!’” (ABC News, April 11)

The next day, however, Defense Secretary James Mattis reinterpreted the tweets. “On a strategic level, it’s how do we keep this from escalating out of control, if you get my drift on that,” said the retired Marine general. (Wall Street Journal, April 12)

It’s not that the Pentagon generals had suddenly turned into peacemakers. No, they would carry out the illegal strike. But at least in this case, they would try to avoid provoking battles that the U.S. Armed Forces might not be ready for.

While details of discussions in the Pentagon have not yet been made public, the “drift” of Mattis’ comments was that the generals considered the president’s tweets to be those of a dangerous fool.

U.S. ships and planes, with Britain and France joining the crime, launched 107 missiles early on April 14 toward three targets in Syria. The Pentagon charged that the targeted buildings were complicit in chemical warfare and that they had been destroyed.

Syria reported that its Pharmaceutical and Chemical Industries Research Institute, which prepared the chemical components for cancer drugs, was destroyed in the attack and provided photos of the damaged building.

Following the attack, Trump declared, “Mission accomplished.” The last president to utter those words, George W. Bush, looked ridiculous for saying them in 2003. Soon after Bush’s comments, the U.S. conquest of Iraq devolved into a decade-long catastrophe for the Iraqis and a near debacle for the U.S. military.

Syrian government defenders say they shot down or diverted 71 of the 107 missiles. Three people were wounded. Syria said it used anti-aircraft weapons provided before 1991 by the Soviet Union, not newer weapons from Russia.

Mattis said it was a one-time action and was over for now.

The president remains under strong assault from Democratic Party politicians and others in the state establishment investigating some of his crimes. Still, no major Democratic Party spokesperson called the attack the international war crime that it surely was. Rather, they cheered it on.

House Minority Leader Nancy Pelosi joined the Republicans in the verbal assault on the Syrian government, then demanded in a tweet that the president ask Congress for a new authorization. She wrote, “One night of airstrikes is not a substitute for a clear, comprehensive Syria strategy.” Senate Minority Leader Chuck Schumer said on Twitter that “a pinpointed, limited action to punish and hopefully deter Assad from doing this again is appropriate.”

Only Rep. Tulsi Gabbard of Hawai’i reflected some of the fears of many people: “President Trump has … escalated our illegal regime change war to overthrow the Syrian government. This escalation is shortsighted and will lead to more dead civilians, more refugees, the strengthening of al-Qaida and other terrorists, and a direct confrontation between the United States and Russia — which could lead to nuclear war.” (gabbard.house.gov)

While the manner in which the strike was carried out avoided an immediate escalation, neither the Pentagon generals nor the Democratic Party leadership can be relied on to prevent a wider war. Nor have any of the forces that make up the U.S. imperialist establishment taken any real interest in defending the people of Syria, despite their crocodile tears about the alleged use of chemical weapons.

The U.S. is a prime user of chemical weapons in warfare. One need only point out that, over a decade, the U.S. dumped 13 million gallons of Agent Orange on Vietnam, denuding the forests and poisoning the population. Even now, 43 years after the end of that U.S. war of aggression, the Vietnamese are still dying and carrying defective genes from this poisoning, along with U.S. war veterans. The hypocrisy on this issue by Washington and other imperialist capitals joins the other big lies used to justify aggression.

Trump, May, Macron under fire

The three imperialist leaders who signed on to the latest war crime are themselves fighting for their political lives at home. Trump faces possible criminal charges and persistent scandals. Teresa May’s Conservative Party in Britain shows a minority in the polls. Emmanuel Macron faces a determined public-sector working class fighting for its life in France.

Many in the U.S. believe Trump was only too ready to look tough by making a military move in order to distract from his own scandals. That May and Macron were ready to ally with the unpredictable U.S. president exposed them as toadies running second-rate imperialist powers, accepting crumbs from the master’s table. They deserve any anger they may face in their own countries.

In the U.S., protests took place in dozens of cities against this latest move toward a wider war. Similar actions took place in other parts of the world. The exposed criminal actions of these imperialist gangsters make it possible and necessary to build the kind of fighting movement that can stop them. Here in the U.S., this movement must be independent of the Democratic Party, whose leaders are just as war-prone as the Republicans and Trump.