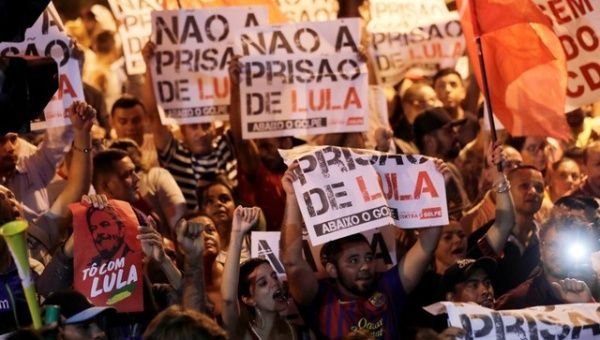 Supporters of ex-president Lula da Silva say, “No to the coup” and “No prison for Lula” on April 10.

“If my crime was putting poor, Black people in universities, allowing poor people to eat meat, to have their own cars, have their own homes, then I will continue being a criminal in this country, because I will do much more.” (Washington Post, April 7)

So said the immensely popular former Brazilian President Luiz Inácio Lula da Silva, popularly known as Lula, as he was surrounded by a throng of thousands of supporters while leaving the ABC Metalworkers Union headquarters on April 7 to begin serving a draconian 12-year prison sentence on trumped-up corruption charges.

This ended a two-day standoff with the Brazilian National Police at the union headquarters. Cops faced thousands of poor and working Brazilian people in São Paulo who were prepared to fight to prevent Lula’s arrest.

But by no means does Lula’s surrender spell the end of the struggle against the right-wing, U.S.–supported regime led by Michel Temer.

Once head of the metalworkers union, Lula, as head of Brazil’s Workers Party (PT), was Brazil’s president from 2003 to 2011. Dilma Rousseff, another PT leader, succeeded him. As Mark Weisbrot wrote in the New York Times on Jan. 23: “From 1980 to 2003, the Brazilian economy barely grew at all, about 0.2 percent annually per capita. Mr. da Silva took office in 2003 and Ms. Rousseff in 2011. By 2014, poverty had been reduced by 55 percent and extreme poverty by 65 percent. The real minimum wage increased by 76 percent, real wages overall had risen 35 percent, unemployment hit record lows, and Brazil’s infamous inequality had finally fallen.”

While these reforms earned the support of millions of poor and working people in Brazil, they spawned intense hatred among the wealthy and, of course, the hostility of U.S. imperialism. In 2014, a collapse of commodity prices sent Brazil into a deep recession. When the Rousseff government tried to accommodate the business community, Big Capital combined gains for the right in Parliament with a judicial attack to impeach President Rousseff. Her attackers could prove no real corruption, but only that she produced “inaccurate” budget numbers.

The right-wing Parliament then installed Temer as president, even though he, like many of them, faces corruption charges. The right-wing legislators have gone to great lengths to protect Temer and themselves from these charges.

The Temer regime has also enacted austerity measures to roll back PT reforms. They loosened the legal criteria in the labor laws for what constitutes slavery. This step caused opposition lawmakers to erect a banner reading, “Saving Temer = slave labor.”

Under Temer, companies found guilty of causing environmental damage have been able to have their fines greatly reduced. Funds for public schools and hospitals have been cut back sharply.

However, the failure of the right wing to slash Brazil’s pension system has disappointed the imperialist banking establishment. “We’re not particularly bullish on pension reform rollout in the near term,” said Yacov Arnopolin, a Pacific Investment Management Co. money manager in London. Arnopolin includes South Africa, Mexico and Argentina as places where reform is progressing. “Our shortlist is focused on places where we can see favorable momentum.” (Pensions & Investments, Feb. 23)

Social unrest in Rio de Janeiro caused the judicial coup regime to deploy troops to that city’s slum areas. Under Brazil’s Constitution, the changes necessary to cut pensions cannot be made while the military occupies that city.

Lula to press right to run for president

Lula was put on trial supposedly for accepting a bribe by receiving an apartment from a giant construction company named OAS. No documentation was ever produced to show that Lula or his family ever took this “gift” or ever lived in the apartment. The only evidence was testimony from a convicted OAS official, who then received a reduced jail sentence.

On April 5, with thousands of the former president’s supporters surrounding the building, Brazil’s Supreme Court wrestled with Lula’s appeal for 10 hours before voting 6 to 5 to deny it. Lula correctly points out that he has been hit with these charges to prevent him from running for president this year.

Lula surrendered to the police so he could continue the legal appeal of his conviction and press his right to run for president even while he is imprisoned. No right-wing candidate has even come close to matching his popularity among the Brazilian people. The Temer regime and their courts are doing everything they can to prevent Lula’s name from appearing on the ballot.

Whatever the outcome of Lula’s legal appeals, the massive and militant support for Lula shows that Brazilian workers and poor are mobilizing and preparing for a fight.