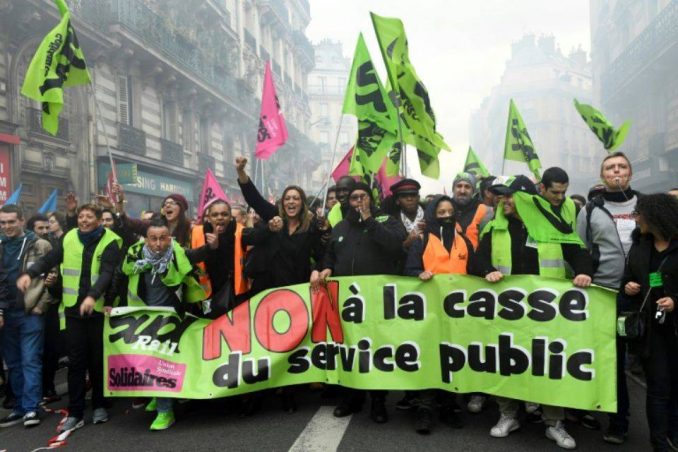 Paris, April 8 — Since the beginning of March, France has plunged into social turbulence. Dissatisfaction is rising everywhere. Demonstrations multiply, as do strikes, notably in public transport — from railway to Air France workers, among sanitation workers, and also in the mass retailing sector. Workers in the French supermarket group Carrefour, the country’s largest private employer, struck after the announcement of the closure of hundreds of stores and the loss of thousands of jobs, despite a billion euros in profits recorded last year.

This is, at last, the first real confrontation of labor with Emmanuel Macron since his election as head of state almost a year ago.

But the question is: Who is French President Macron? He’s called handsome, elegant, brilliant. At just 39 years of age, he was elected president of the republic in May 2017, after a meteoric political rise. He also impressed Donald Trump, whom he invited to Paris last July 14 to celebrate a national holiday and attend a military parade on the Champs Élysées.

This is the first time France has a president who speaks English so well and smiles “like an American.” That should be no surprise: He was a member of the “Young Leaders” of the French-American Foundation, an institution responsible for “strengthening ties between France and the United States.”

Nevertheless, Macron’s electoral base is very narrow. Although he led the first round of the presidential elections in April 2017, he received only 24 percent of the vote — 8.66 million votes — only slightly more than the far-right-wing National Front candidate Marine Le Pen, who received 21.3 percent, or 7.68 million votes. His other opponents, François Fillon on the right with 20 percent and Jean-Luc Mélenchon on the left with 19.6 percent, trailed him by a bit less.

Running against the far-right candidate in the second round, Macron played it smooth: France is not racist; it is a well-known fact. Macron was elected by a landslide, with 66.1 percent of the voters, but with more than 25 percent abstaining.

Sure of himself, he celebrated his victory the evening of the first round by holding a reception in a luxurious Parisian restaurant, surrounded by powerful jetsetters like Jacques Attali, former adviser to President François Mitterrand and great friend of the establishment, and Daniel Cohn-Bendit, former leader of the May 1968 student revolt, who later became a loyal servant of European big capitalists.

Macron is a pure product of high finance. After having been a public auditor, he declined a proposal from his boss’s boss, Laurence Parisot, to accept the post of general manager of the employers’ association, Mouvement des Entreprises de France (MEDEF), preferring to work as an investment banker at Rothschild, where he became a managing partner.

President François Hollande, who was elected as a member of the Socialist Party, first appointed him deputy secretary general of the Elysée (2012) and later minister of Economy and Industry (2014). Choosing a banker to run industry, what could be more logical? The “Macron Act,” which was forced through Parliament in 2016, made the labor market even more “flexible,” allegedly to “unblock” the French economy by eliminating laws that protect workers’ rights.

Macron’s success can largely be explained by the decline of the country’s two traditional governing political parties: the classic right, currently called the Republicans, and the formerly left Socialist Party, which has become the new right, as it no longer defends workers’ rights at all.

With the presidencies of Nicolas Sarkozy (2007-12) and Hollande (2012-17), Republicans and “Socialists” had indeed modified their historical trajectories and bowed down before finance, becoming its faithful servants. That was quite new in France. And this is the main cause of the collapse of these two main parties, which shared power before Macron, both holding executive power without providing alternative programs.

Macron is nothing more than the repolished and rejuvenated synthesis of a fundamental trend in French political life: abandonment of national sovereignty and absolutely lamentable submission of the state. It is no surprise that the pro-U.S. imperialist line oriented to NATO and North America is strengthened at the same time.

It was enough to get him elected. His election campaign, orchestrated by an obsequious and unanimous media under orders from a handful of oligarchs, sold him like a commodity. With the allure of an airport novel to boot: his spouse, Brigitte Macron, was his high school drama teacher!

That’s because in this deteriorating democracy, they needed a talented actor to make the French population forget that their country is no longer sovereign but governed by high finance. However, the play whose performance is announced was not written in advance. Social unrest is growing.