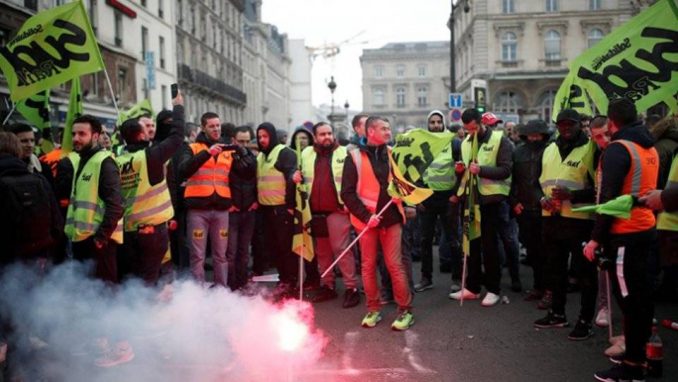 Sud Rail workers at a demonstration in Paris as part of a nationwide strike, France, April 3, 2018.

Workers World Party in the United States wants to express its great admiration and total solidarity for the current struggle of French workers against their government’s intention to destroy gains French workers have won over decades of protests and mass movements, through the imposition of austerity and the laying off of 120,000 public service employees.

While workers in France do have a constitutional right to strike, the administration of the former Rothschild banker Emmanuel Macron and his prime minister Edouard Philippe have made it clear that they do not intend to bargain. They intend to break the railroad unions: the General Confederation of Labour (CGT), National Union of Autonomous Trade Unions (UNSA), French Democratic Confederation of Labour (CFDT) and SUD-Rail. In that process, they also want to sweep away unions representing sanitation and sewerage workers (éboueurs et égoutiers), the employees of Air France and Electricity of France, and students whose status is being challenged.

Workers in the U.S., especially teachers and other workers in education, have been confronting austerity for decades. Teaching in the U.S. is a high-skill, low-pay job. In most states, teachers do not have the legal right to strike and to bargain collectively. U.S. public sector workers and their unions are increasingly under attack.

But a successful, albeit illegal, statewide education strike in West Virginia and ongoing teacher walkouts in Oklahoma and Kentucky, indicate a rising sentiment against government-imposed austerity in the U.S.

There is an objective basis for solidarity between French and U.S. workers in the current struggles against austerity and for higher wages, better pensions and better working conditions.

Long live the solidarity between French and U.S. workers! On to final victory!