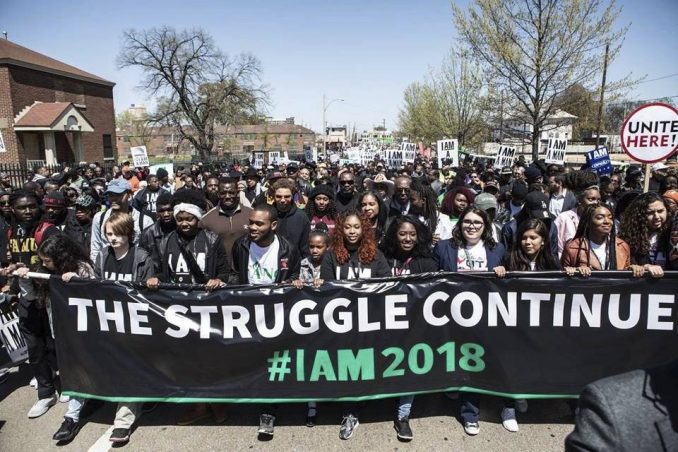 AFSCME 1733, the Memphis union local that won the 1968 sanitation strike for its 1,300 members, marches proud and strong in Memphis fifty years later, April 4, in memory of Dr. M.L. King Jr.

Memphis, Tenn., April 4 — Thousands of people from far and wide, including worker delegations, gathered here on the 50th anniversary of the heroic Memphis sanitation workers strike and the assassination of the Rev. Dr. Martin Luther King Jr.

Wearing their union T-shirts, NAACP jackets or other identifying organizational garb, they filled huge halls to standing room only and marched with today’s American Federation of State, County and Municipal Employees Local 1733 sanitation workers to a rally next to the Mason Temple. UNITE HERE brought at least 2,000 members, travelling to Memphis on 41 charter buses.

Thousands gathered for more speeches and singing outside the Lorraine Motel, where King was killed by a single bullet. The Lorraine and nearby buildings how house the National Civil Rights Museum, with an extraordinary collection of photos, documents, videos, oral histories and related items. On display is a sanitation truck like the one that crushed to death workers Echol Cole and Robert Walker, sparking the 1968 strike.

The famous slogan of the sanitation workers’ picket signs, “I Am a Man,” appeared on murals and commemorative T-shirts and was inclusively transformed on the AFSCME banner to “I Am 2018.”

Many present were older people who had participated in marches and voter registration drives, faced police dogs and water cannons, or been fired from their jobs or evicted from their homes. Everywhere were families with teenagers and small children. Young adults, now part of #BlackLivesMatter and movements against police killings, state violence, gentrification, low-wages, poverty and white supremacy, came to April 2-3 training sessions. These were designed to transfer organizational skills and knowledge of previous civil rights struggles to today’s activists.

AFSCME Memphis sanitation workers broke open the fight for public sector employees to belong to a union. In 1968, they used their power to withhold their labor as a tool to win collective bargaining rights and hold onto those rights.

Dr. King’s support of the sanitation workers’ strike was also key to the Poor People’s Campaign that he launched earlier in 1968, intending to bring the struggle against economic inequality and systemic poverty to Washington, D.C. King coupled this action with his denunciation of the U.S. war on Vietnam, declaring the U.S. government to be “the greatest purveyor of violence in the world.” He made the economic link clear by saying “the bombs dropped on Vietnam explode” in the nation’s communities of poor and working people.

From a new Poor People’s campaign to the April 14-15 national “End U.S. Wars at Home and Abroad” rallies — in the strikes and walkouts by public education teachers and staff in West Virginia, New Jersey, Kentucky, Oklahoma and Arizona — the resistance embodied in the Memphis sanitation workers and in Dr. Martin Luther King Jr. lives on!