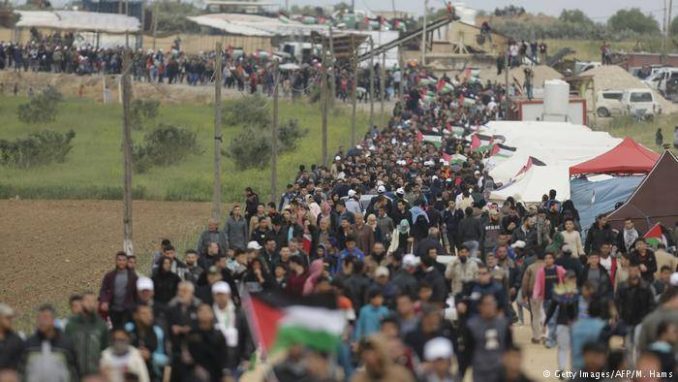 The people of Gaza, in a show of their unbreakable will to resist Israeli rule and control their own destiny, have begun a series of demonstrations at the heavily fortified border with Israel that are to continue every Friday until mid-May. The result has already been a historically heroic uprising by Palestinians, young and old, women and men, who are joining the demonstrations by the thousands.

It is not only the Israeli government’s murderous repression that has ignited this firestorm of resistance. The Palestinian people know full well that Israel is backed to the hilt by the U.S. imperialist government. Israel has functioned as imperialism’s attack dog against the peoples of the Middle East for decades. Now President Trump’s decision to move the U.S. Embassy from Tel Aviv to Jerusalem is meant to destroy the possibility — known as the “two-state solution” — of the Palestinians being able to establish a state on any part of the lands stolen from them in 1948.

But repression breeds resistance. The people of Gaza are setting an example of fighting back that resonates with so many who are suffering under the current “world order” — a regime dictated by the tiny class of superbillionaires who have sucked the wealth out of oppressed nations and peoples all over the globe.

The Palestinians have put their bodies on the line, even at the very real risk of being shot down by Israeli soldiers.

On March 30, at the first protest, 17 unarmed Gazans were killed and hundreds were injured as Israeli troops used live ammunition and tear gas against the demonstrators. That date is known as “Land Day.” It marks the deaths in 1976 of six Palestinians who had been protesting the Israeli government’s seizure of agricultural land from people who had farmed it for generations.

At the second protest on April 6, some 20,000 Gazans gathered at the border. Israeli troops shot and killed nine of the protesters, one of them only 14 years old. This time some of the youths burned tires, hoping the dense smoke would shield them from Israeli snipers.

Among those shot and killed was Palestinian journalist Yaser Murtaja, who was covering the protests while wearing a vest showing the word “PRESS” in huge letters. Murtaja, 30 years old, was born in Gaza and had never been allowed to travel outside by the Israelis.

The weekly protests, known collectively as the Great March of Return, are planned to continue until May 15, when the Palestinian people will be commemorating the 70th anniversary of the Nakba, the Catastrophe. The Nakba occurred in 1948 when some 700,000 Palestinians were brutally evicted from their homes by Zionist armed gangs, incited by the U.S. and European imperialist governments. Today, two-thirds of the Palestinians in Gaza are descendants of those made refugees in 1948.

Gaza is a small strip of land along the Mediterranean Sea, less than half the area of New York City. Some 200,000 Palestinians are forced to live within its borders under the most intolerable conditions. They are trapped there by an Israeli land, sea and air blockade, and few are ever allowed to leave. Most are city dwellers, but some have small farms that attempt to supply food to the population.

After 10 years of blockade, some 80 percent of the people there are dependent on humanitarian assistance for their very survival.

Rejecting Israeli claims that the protesters were coerced by the Palestinian organization Hamas, one British paper described the conditions in Gaza: “Nor could demonstrators have been persuaded to participate in these numbers were it not for the hopelessness they feel after 11 years that have seen them suffer three bloody wars, an Israeli-Egyptian border closure, and an Israeli blockade that has imploded Gaza’s economy. There is despair over the undrinkable tap water, the four hours of electricity, the shortage of medicines and the relentless increasing unemployment rate among one of the most educated peoples in the Arab world. Over 60 percent of under-25s are unemployed.” (The Guardian, April 8)

Over the last decade, resistance to Israel has grown with each new atrocity.

In 2008, Israel launched a full-blown invasion of Gaza in which more than 1,400 Palestinians were killed.

In February 2010, nine pro-Palestinian activists were killed when Israeli commandos raided a Gaza-bound flotilla trying to bring aid in defiance of the blockade. The Israeli attack left a trail of dead and wounded among the 600 activists on the ship, the Mavi Marmara.

In July 2014, Israel launched another air and ground offensive against Gaza that killed 2,100 Palestinians, including 495 children.

Not all Israelis support these murderous acts. The human rights group B’Tselem is urging soldiers to disobey any orders to shoot at unarmed civilians. Three Israeli experts on international law have agreed that firing on unarmed protesters is illegal.

On May 15, Palestinians will commemorate the Nakba. On May 16, the U.S. government will move its embassy to Jerusalem. There will undoubtedly be massive demonstrations by Palestinians on these days, not just in Gaza but all over the world. Everyone who is for the rights of the oppressed should be there.