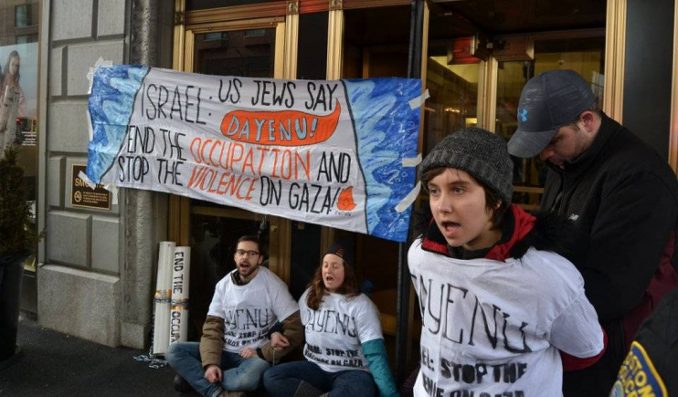 Eight members of IfNotNow said ‘Dayenu! Enough!” to attacks on Palestine, chaining themselves to the Israeli Consulate in Boston.

A series of demonstrations took place in Boston this week in response to the Israeli Defense Forces’ massacre of Palestinian protesters along the Gaza border. On April 2, the Answer Coalition of Boston called an emergency demonstration in Copley Square. Anti-imperialists and allies of the Palestinian people gathered to denounce Israel’s crimes and express solidarity with the Palestinians killed and wounded by IDF snipers during the Great March of Return.

After the speakout, militant protesters marched to the Israeli Consulate, chanting, “Gaza, Gaza, don’t you cry! Palestine will never die!” and “Resistance is justified when people are occupied!” Once they arrived at the consulate, the protesters demanded an end to the Israeli occupation of Palestine and the return of all land.

On April 3, eight protesters from the Boston chapter of IfNotNow, an organization of U.S. Jewish activists, chained themselves to the Israeli Consulate during a demonstration. They demanded that the consulate take a public stance against the violence carried out by the IDF. They and other protesters called for an end to the Israeli occupation of Gaza and the West Bank.

Midday on April 5, another group of protesters gathered in front of the consulate with demands to end the genocide of Palestinians. Later in the day, the Answer Coalition held a mock trial to “Indict Israel, not Ahed Tamimi.”

As the Palestinian people continue to resist Israeli occupation with the Great March of Return, another rally has been called by the Boston Palestine Solidarity Network for April 21 on the Boston Common. This date marks the 70th anniversary of the Nakba, the Catastrophe, when hundreds of thousands of Palestinians were forced to flee their homes during the 1948 war.