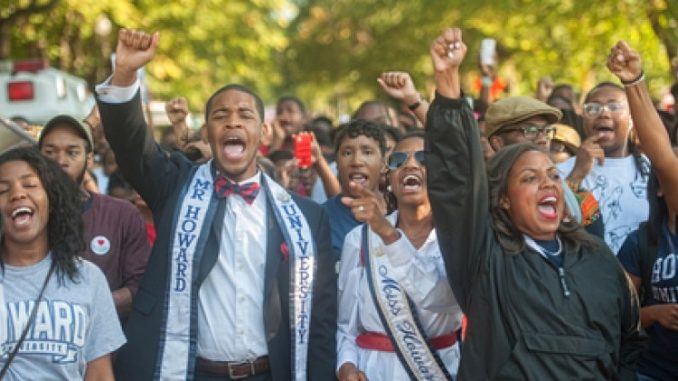 April 2 — Students and organizers at Howard University are engaged in a fifth day of protests and sit-ins in administrative buildings after the university fired six employees for the misappropriation of nearly $1 million in financial aid funds. Students have called for the removal of President Wayne A.I. Frederick, as many view him as an embodiment of the administration’s lack of care. They are also calling for the removal of his board of trustees.

Participating as HU Resist, the students assert that the sit-ins are not entirely about money or funds.  They are also about a gross misuse of power and irresponsibility on the part of the administrative staff. Earlier this year, multiple complaints were made over inadequate student services and the administration’s poor handling of sexual assault cases.

Housing accommodations are also on the list of reforms students are demanding. Earlier this year some students were told that, although they had submitted deposits, Howard was unable to guarantee them housing. As rents throughout the Washington, D.C., area have increased dramatically with gentrification, they found it difficult to live off-campus. Some feared that the lack of housing would jeopardize continuing their academic careers.

However, success has come from the sit-ins. The administration recently granted an extension of the housing application deadline to May 1. Reforms, nonetheless, are still desperately needed.

Student organizers have also demanded the disarming of campus police officers and the establishment of a police oversight committee that is controlled by students and other community members. As the topic of gun control generates increased public discussion, this demand is significant.  Students do not want the militarization of campus and off-campus police.

The students are also demanding a halt to the imposition of rapid tuition hikes. The sit-ins expose how the current administration is monetizing its students. Profit is prioritized over students’ well-being and overall education.

The struggle at Howard raises the question: If financial embezzlement occurred at Howard, could it be happening at other college campuses in the United States? Postsecondary institutions have too often abandoned the goals of education and human development.  Under capitalism, universities are motivated by profit, even at the expense of their students, who are viewed as mere consumers.

Throughout the protests, HU Resist has tweeted to shed light on the current scandal and to ask for help, including food for the protesters and general support. Multiple students reported that tutoring and counseling services are also being provided at the sit-in — a reminder that these students are at the forefront of a conscious movement. (Twitter: @HUResist)

Students should not have to worry about rampant corruption in their school administration. In spite of everything, HU Resist has taken a strong stance.  Protesters may miss classes, but they gain solidarity in return.