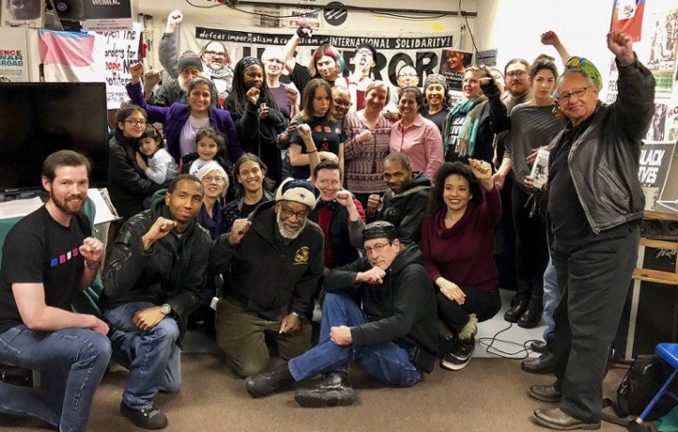 She told the audience, “The very category of who is, and who is not, considered to be a woman is a tool of settler violence. The state uses gender violence to enforce white supremacy, anti-Blackness and settler colonialism.

“Native women are attacked to destroy our families and our nations. Settler colonialism uses gender to colonize through centuries of rape and sexual mutilation, and through the widespread sexual violence of the residential schools and in foster care.”

“Workers World Party holds the view that all oppressed nationalities and all workers will eventually win their emancipation through socialism — no matter what road they decide to take to get there, up to and including separation,” she said. “But if we want to win our class to this view about socialism, we understand that this is a process that will only be achieved by building genuine solidarity within our class — the working class — through patience and perseverance. And in order to deepen that solidarity, we must avoid at all costs, the mistakes of the past.”

Moorehead continued, “The most central mistake was not recognizing that within the working class, there is not equality. That one should not have to marginalize or put to the side one’s identity as a person of color, a woman, a queer person, a person with disability, all for the sake of ‘class unity.’ Some characterize this as ‘identity politics,’ which is a cop out from doing the necessary work to build this unity.”

Marta and Doris, who are both from El Salvador and leaders in their unions UNITE HERE Local 26 and SEIU 32BJ, respectively, at Harvard University, educated the crowd about their fight to save TPS (temporary protected status) and DACA (Deferred Action for Childhood Arrivals). Rescinding both of them threatens thousands of migrants with deportation, especially people from El Salvador and Haiti. Marta and Doris helped found the Harvard TPS Coalition, which is growing in strength and numbers. Eliciting tears, Marta told of the emotional anguish she would feel if she were forced to be separated from her three young children and sent back to El Salvador. Her three daughters were in the audience, and it was the first time she had talked about this in front of them.

On Aug. 8, 1978, a massive racist police attack on the MOVE house in Philadelphia resulted in the death of a white police officer. Nine members of the predominantly Black MOVE family were falsely accused of murder and found guilty.

mYia X elevated the names of four of the MOVE 9 political prisoner members — Debbie Africa, Janine Africa, and Janet Africa — imprisoned for 40 years. Merle Africa was “murdered by the system in the toxic death jails of Pennsylvania.” (onamove.com)

mYia X called on the audience to support the upcoming May parole hearing for the MOVE 9. For additional info on how to submit letters for their parole packets, visit www.onamove.com or workers.org.