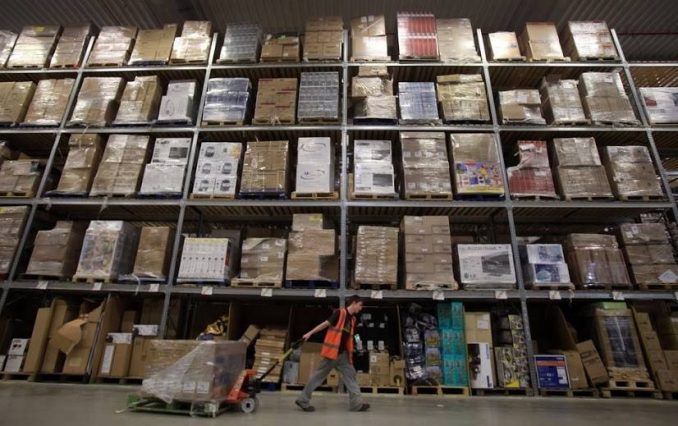 Amazon CEO Jeff Bezos has an obscene individual net worth of over $124 billion. Yet, the company’s half-million-plus workers worldwide are struggling to survive economically while being pushed to their physical limits to maximize productivity at Amazon’s “fulfillment centers.”  Comrade James Costello was hired at the Indianapolis warehouse in October, just before the high-pressure peak season that began on “Black Friday.” Amazon has five warehouses in Indiana, each employing around 2,000 workers. Amazon is now the 15th largest employer in the state. Recently, Costello talked to WW labor reporter Martha Grevatt about working for Amazon.

MG: Tell us about the working conditions.

JC: With a full shift, however many packages come in, we’re expected to push out at least around 20,000 packages, sometimes higher, sometimes lower. It can get unsafe when we have 30,000 or more packages because the other part of the job is loading them into vehicles, and it’s hard to get them all pushed out. Packages get stacked up so people end up tripping. People try to lift heavier packages by themselves and get sprains and other injuries, including to their back. Small injuries like that are not covered by Amazon. You can go home but it’s an unexcused absence. If you are severely injured, insurance will cover it, but only if it can be proven that the injury took place during working hours. At the Plainfield, Ind., facility someone was killed during peak season last year. They got killed by a lift. They were pulling packages, and the lift came down while they were at the bottom underneath it. This demonstrates both a lack of proper safety training and a lack of equipment maintenance.

MG: Is there a high rate of injuries? How are injured workers treated?

JC: There are a lot of injuries but many go unreported. It’s really an issue for the older people working there, just the physical requirements and the injuries. People work injured because they can’t afford to take the time off to get better. Then the burden is on you to prove you actually got injured at the workplace. If you can’t prove that, Amazon won’t help you.

MG: How many hours are you required to work each day and each week?

JC: Right now I work full time, seven to eight hours a day, five days a week. However, if there’s a large load coming in, those hours can be extended or hours can be shortened on a slow day.

MG: What kind of breaks do you get?

MG: Is this adequate?

JC: I don’t feel it’s adequate, personally. When you’re standing the entire day and running all over the place, 15 minutes isn’t enough. If there’s a lot of packages, they will start the break but then expect you to be back at the line after the 15 minutes is up. So going to and from the break area is included in the 15 minutes.

MG: So you are on your feet half your break?

JC: If you work far from the break area, yeah.

MG: Do workers have issues with being able to use the restroom?

JC: Yes. You are pushed to make these quotas and if you use the bathroom, they see you as not being “productive.” I was told by a co-worker who has worked at multiple locations that they got written up for using the restroom because it meant they were under the quota. So you have to go without using the restroom.

MG: There has been a lot in the media about Amazon’s tracking of workers and workplace surveillance. Can you talk about this and what kind of working atmosphere it creates?

JC: For whatever aspect you are working in — fulfillment-picking, packaging or distribution — each category has its own labor tracking process. Fulfillment is Amazon’s term for the process of picking (locating bought item in inventory and going through pick process), packaging item, sorting, loading and then sending item outside the facility. These are the steps to get the item from inventory to delivery. You have a mobile computer device where you scan a product that goes into the system, and you have to meet a quota per hour on packages pushed through. Going under quota can lead to being sent home early or possible termination if it recurs multiple times.

The other aspect of that question is the atmosphere. The workers are really put up against management to a point that the workers feel extremely exploited. When they get a drink of water or go to the bathroom they know they’re being watched constantly. This creates an atmosphere of uneasiness. Even talking can create problems because workers are focused on “I gotta be more productive.”

MG: What are you paid?

MG: Are there any benefits on top of your pay?

JC: There are benefits that you have to pay some of the cost of. I do not get those benefits because I can’t afford to pay my half. A lot of workers do not have benefits. There are no fully covered benefits.

MG: Do you have co-workers on public assistance such as food stamps?

JC: Yes. Amazon is a company where the CEO is one of the richest people in the country and the world, but because the pay is so low many workers have no other option but to get assistance elsewhere, working multiple jobs or through food stamps and other survival programs.

MG: Is there a high turnover rate?

JC: There is. Many workers are worked to a point of quitting or being fired for not making quota or other factors. A lot of workers come in who have been let go but they reapply. People get fired before their raise, then get hired back at the lower rate.

MG: Describe the workforce demographics. Is there discrimination?

JC: At the facility I work at, it’s mostly younger people of color and especially women of color. Many are working multiple jobs. Amazon is not a safe place for people facing special oppression. Racial discrimination takes place, it’s not friendly to LGBTQ people, and it’s not safe for non-binary people.

MG: Would you get fired if you tried to unionize?

JC: More than likely, yeah. None of the U.S. locations are unionized. They’re very strict about not unionizing, telling us in orientation that there is no need because everyone has the right to speak to their managers. It would be very hostile. Amazon workers have only won the right for a union internationally. Labor fights and strikes were a result of international union drives, which were met with a high level of resistance from the company.

MG: Is there any talk about bringing in a union?

JC: There is talk among the workers about how conditions could be better. However, a lot of workers also talk about how hard it would be to organize successfully under Amazon.

MG: What would you and your co-workers want to see if you could unionize?

JC: We would want a wage that reflects living expenses in our area, a living wage by which we’d be able to afford basic necessities and not have to rely on survival programs. We would demand that the invasive labor tracking policies and devices be removed. We would demand adequate breaks with better policy on when they start, so that when you reach the break area you can eat, take a rest and hydrate.

MG: Walmart is notorious for its terrible treatment of workers — warehouse workers now as well as retail employees. Do you see a comparison?

JC: Yes I do. When you look at Amazon and at Walmart, it’s the same policy of pushing out a high number of goods while keeping wages low, and at the same trying to make it impossible to unionize. They both push heavily anti-union material through the orientation process, as well as enforce the highly exploitative nature of the work.

MG: Could there be a way to build low-wage worker solidarity among workers at big chains like Amazon and Walmart?

JC: Yes, a lot of people think Amazon — the increase in online shopping and the drop in retail stores — was the reason Walmart is laying off people. But that’s not really true. The truth is that Walmart seeks to increase the pay of high-ranking bosses while keeping the wages of workers as low as possible, plus Amazon is talking of laying off workers now that the peak season is over. We know that Amazon’s profits are not decreasing, but it is still seeking to decrease the number of workers in order to exploit its workers at an even higher level and increase its profits even more.

There’s a basis for solidarity among workers in retail to organize together as one struggle. And I would include delivery workers.  Many of them are unionized like at UPS and have won tremendous victories through union struggle. But a lot of their victories have been reversed and there’s a lot of pressure on their union, the Teamsters. There are ways in which Amazon workers and UPS workers could show solidarity with each other against the bosses who seek to exploit them as much as possible.

MG: How can we support Amazon workers and help them receive better treatment?

JC: There’s a lot of push for a complete boycott of Amazon and Walmart.  But what people can really do to support those workers is to demand from the companies that workers be treated fairly. People can bring the struggle of those workers to their own union and their own workplace. That would be the main way that solidarity could be built.

MG: Would you say that you and your co-workers are a highly productive workforce? How does your compensation contrast with the amount of wealth you produce?

JC: The CEO of Amazon, Bezos, has surpassed Bill Gates in wealth to become one of the richest people in the world. The majority of Amazon workers make below a living wage standard. That is unacceptable. That Bezos pushes to increase profits, when Amazon workers are not able to afford basic necessities, exposes the superexploitative nature of the bosses.

MG: How does a Marxist economic understanding explain how you are treated by Amazon?

JC: You look at the way corporations under capitalism developed. You see automation occurring. You see technology that could make the workload easier and the experience higher quality, but it doesn’t lead to workers having an easier workday. Instead, the bosses use that tech against the workers while creating the highest profit margins for the corporations.

The bosses use technology to further exploitation and to lay off workers instead of making the work easier.